Peugeot's first attempt at the family Crossover segment, the 3008, proved to be very successful for the Gallic brand when first it was introduced in 2008. To keep this model competitive in the Qashqai class, the French maker significantly facelifted this design towards the end of 2013. That's the version we're going to look at here as a potential used buy. How does it stack up?

By now, most of us are familiar with the concept of a 'Crossover', a family car providing the best elements of an SUV, an MPV and a conventional hatchback. This one, Peugeot's first generation 3008, wasn't the first model of this kind to hit the market but it struck quite a chord with customers following its launch in 2008. Over half a million buyers chose this car in its original form, despite mainstream variants lacking the 4WD and 7-seat options that some Crossover rivals offered. Why? Well it was well priced, neatly packaged and had a quality feel. Plus, a little ironically, despite the 2WD-only drive layout, it was actually a little more use in nasty conditions than affordably-priced versions of key rivals, provided the owner specified the useful GRIP CONTROL system for extra traction reaction. All of these attributes were of course carried forward into the significantly improved first generation design launched in late-2013, the car we look at here, along with extra equipment and much smarter looks. The clever eco-minded HYbrid4 flagship variant we first saw in 2012 also continued on at the top of the range, mating a diesel engine driving the front wheels with an electric motor powering those at the rear. The improved MK1 model 3008 model range got uprated Euro6 engines in 2015, so out went the old 1.6 VTi petrol and 1.6 THP petrol units in favour of a more efficient 1.2-litre e-THP three cylinder 130bhp unit. And out went the old 1.6 and 2.0-litre HDi powerplants in favour of more efficient 1.6 and 2.0-litre BlueHDi units. In that form, the 3008 line-up continued until it as replaced by the more sophisticated second generation model early in 2017. 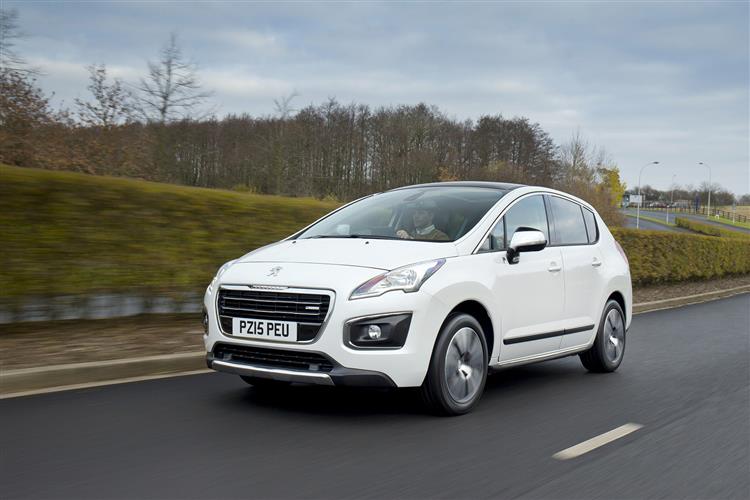