The 'Cross Country' derivative of Volvo's V40 model was launched in 2013 to offer an alternative at the premium end of the growing Qashqai-class Crossover market - an option perhaps to the Audi Q3, Mercedes GLA-Class or BMW X1 that target buyers might have been thinking about. Though the changes over a standard V40 were slight, in buying one of these, you do get an up-market feel, class-leading efficiency - and the option of 4WD at the top of the range.

Qashqai-style Crossovers now fill our roads, family hatchbacks with a touch of the Outback about them. But is it really necessary for a brand to design a product from scratch in order to compete in this growing market niche? In 2013, Volvo said it reckoned not, bringing us this car, the V40 Cross Country. If the ordinary V40 didn't exist, you might see this as a very credible kind of compact crossover. As it is, we know that this is a V40 in a pair of hiking boots - though unlike some supposedly 'proper' Qashqai-class models, it does have the top-of-the-range option of 4WD. From Volvo's perspective, there's everything here that you need in a compact Qashqai-class Crossover - and nothing you don't. And the 'everything you need' bit includes class-leadingly efficient 2.0-litre petrol and diesel Drive-E engines. These were gradually introduced throughout the early production life of the 2013 to 2016-era V40 Cross Country models we're going to look at here, the D4 diesel and T5 petrol powerplants arriving first, with lesser engines appearing towards the end of 2015. It was soon clear that this technology represented a big step forward from that employed in the old Ford-derived units. The 190bhp diesel D4 model could sprint to 62mph in less than 7.5s, yet could return a combined cycle average of nearly 75mpg, with CO2 returns below 100g/km. Here, in other words, was a product headlining a model range now promising to offer a very compelling proposition indeed. Which was very necessary in view of the tough completion this Swedish contender had to face. Buyers were slow to realise the extent of the improvements though, so to help re-position the V40 Cross Country, Volvo gave it a minor facelift in the Spring of 2016.

What You Getword count: 759

Pay the extra for the rugged 'Cross Country' bodystyle and you get silver roof rails, glossy black window trim and, for that SUV look, a contrasting rear bumper with integrated skid plate. Other extra 'Cross Country' niceties include power-folding mirrors and auto wipers. Otherwise, the recipe is exactly as it would be in any normal V40, a car with plenty of cues to Volvo heritage, like the familiar V-shaped bonnet. There's a broad-shouldered look that references the Amazon models of the '50's and you also get the hexagonal tailgate we first saw on the classic P1800ES coupe that Roger Moore drove on TV in 'The Saint' back in the '60's. The wedge-shaped silhouette and lean-forward stance draws your attention to a front end that we think is particularly elegant, with its heavy creases, sculpted headlamps and a ground-hugging stance emphasised by a low, wide high gloss front grille. American Designer Chris Benjamin calls it 'a 3D piece of art you can drive'. Inside, there's a beautifully positioned infotainment screen that, once you've figured out its complicated menus, enables you to deal with audio, navigation, 'phone and other functions almost without taking your eyes off the road. The idea is that, like IKEA furniture, this cabin should be typically Scandinavian, comfortable, simple, intuitive and visually pleasing. And broadly it is. Yes, the storage space on offer is certainly bettered by some rivals (the door bins are tiny for example), some of the stalks could feel a bit more substantial and the trademark 'floating' centre console has rather too many small buttons on it, but these details apart, the overall effect is far more successful than anything Volvo has previously managed, the eye drawn to slick detailing, much of which was optional for original buyers, things such as the frameless rear view mirror and the translucent gear selector. One of the nicest touches that lots of customers opted for from new is the hi-tech TFT instrument display. With the flick of a switch, you can choose between three different dial layouts - an green back-lit 'eco' setting to help you drive more economically, a red back-lit 'performance' mode to better suit for spirited driving and the more usual amber back-lit 'elegance' setting for more comfort-orientated day-to-day motoring. We'd also be tempted by a car fitted out with the lovely optional 'theatre lighting' which can be adjusted through seven mood themes, from red to blue. You can get carried away with things like this and forget more crucial considerations. The seats for example. It's remarkable how little importance we attach to the things we'll be sitting on in our cars, given that we'll be spending many hundreds or thousands of hours in the things, and down the years Volvo has quietly earned a reputation for making the comfiest chairs in the business. This V40 continues that form line with what have to be the most supportive yet wonderfully pillowy seats in the family hatch sector. Courtesy of a curve on the doorsill, access into the back isn't quite as easy as with some rivals, but once you're inside, leg, shoulder and kneeroom are quote good for two adults, courtesy of the way that the seats have been angled slightly inwards to give rear occupants more space and a better view forward. Mind you, that doesn't do much for the centre part of the rear bench, a place you won't want to be confined for any distance. Still, there isn't any contender in this segment able to comfortably seat three fully sized adults across the back over long distances. Headroom is fine, provided you're not in a plush variant fitted out with the large panoramic glass roof. And luggage space? Well, the 335-litre boot isn't the biggest in the sector, but it is at least 10% larger than a Focus, though that's not saying much. Still, you can make very good use of it if you use the useful twin-floor arrangement, which makes the floor completely flat when you push forward the 60/40 split folding rear bench to free up 1,032-litres of total space - while leaving a concealed storage area beneath. There are hooks for grocery bags and useful options like a hanging load net and an optional 'Load Organiser' to compartmentalise the space and keep your eggs from mixing with your Iron Bru. Should you need to regularly accommodate something really long - say a surfboard or a bike - you'll need to find a V40 whose original owner chose to kit it out with the optional fold-forward front passenger seat. 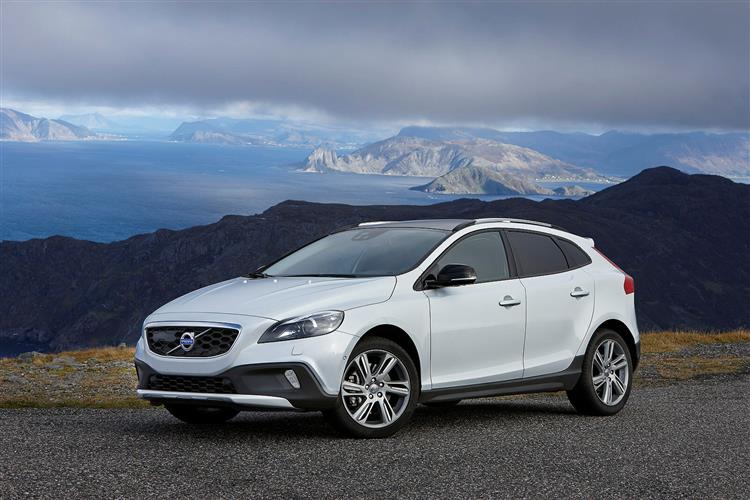