SWEDE AND SENSIBLE (some text hidden)

As with most things in life, the best products take what seems a complicated bunch of requirements and reduce them to something very simple and elegant. The Volvo V40 is just such a car. We're looking at the model that was first launched in 2012, though the focus here is on the versions produced in the 2014 to 2016 period, a time when the Swedish brand was gradually introducing its own 'Drive-E' engine technology. If you can stretch to one of these slightly later models and get yourself a variant fitted with one of the Drive-E engines, you'll get yourself a very complete premium compact hatch indeed, a car that looks great, drives well, has an amazing amount of safety equipment built in and makes sense on the balance sheet too. Let's check this car out thoroughly as a used market proposition.

Traditionally, Volvos have been better when they've been bigger. It's not that the Swedish brand hasn't tried its hardest with compact, more affordable models. On the contrary, it has a heritage in such designs stretching all the way back to the PV51 of 1936. None though, has been what you'd call desirable, unless for you, desire is a virtue that's safe, solid and sensible. Here though, is a car that is. The V40 premium family hatch, launched here in the summer of 2012, then rejuvenated in mid-2014 with the addition of some super-frugal Drive-E engines that created the model range that lasted until the car got its first main facelift in th Spring of 2016. It's these 2014 to 2016-era models that we're going to look at here. Prior to its original introduction in 2012, this V40 model's lineage was unremarkable. Through the 340/360 models of the late '70's, the 440/460 series of the late '80's and even the two generations of S40 saloon that more recently followed them, compact Volvo models sold steadily to virtuous Volvo people - but not really to anyone else. The brand's Chinese owners, Zhejiang Geely, who took over from Ford in 2010, needed more. A range of future models that kept the old qualities but redefined them in a more dynamic, interesting, lifestyle-orientated and forward-thinking way. This V40 was the first of them. Despite the 'V' designation, traditionally used by the brand to reference estate cars, this is a Focus-sized family hatch - but a rather posh one, aimed at the top end of this segment where you'll find premium models like BMW's 1 Series, Audi's A3 and the Mercedes A-Class. It's job was always to take on these elite rivals, simultaneously replace the old S40 saloon and V50 estate models that prior to 2012 had kept dealers afloat and play a major part in doubling the company's worldwide sales by 2020. But this car was originally launched in 2012 without the key weapon it really needed in meeting that objective - the class-leading range of powerplants developed as part of the Volvo Drive-E engine line-up. These 2.0-litre units only began to appear in V40 models from 2014 onwards, the D4 diesel and T5 petrol powerplants arriving first, with lesser engines appearing towards the end of 2015. It was soon clear that this technology represented a big step forward from that employed in the old Ford-derived units. The 190bhp diesel D4 mode, could sprint to 62mph in less than 7.5s, yet could return a combined cycle average of nearly 75mpg, with CO2 returns below 100g/km. Here, in other words, was a product headlining a model range now promising to offer a very compelling proposition indeed. Which was very necessary in view of the tough completion this Swedish contender had to face. Buyers were slow to realise the extent of the improvements though, so to help re-position the V40, Volvo gave it a minor facelift in the Spring of 2016.

What You Getword count: 857

The safer a car is, the safer will be its approach to exterior design. That was once true of small Volvos - but it isn't any more. In fact, it's precisely because this V40 is good in an accident that it looks so smart. Let us explain. Almost all cars have relatively high bonnet lines so as to leave an under-bonnet void to meet pedestrian impact legislation. But thanks to a unique under-bonnet airbag, this car doesn't need to allow for that, so its bonnet line can be much lower, part of a lean, wide coupe-like stance in a shape very slightly longer and wider than rival BMW 1 Series or Audi A3 models. But one with plenty of cues to Volvo heritage. The familiar V-shaped bonnet. The broad-shouldered look that references the Amazon models of the '50's. The hexagonal tailgate we first saw on the classic P1800ES coupe that Roger Moore drove on TV in 'The Saint' back in the '60's. The wedge-shaped silhouette and lean-forward stance draws your attention to a front end that we think is particularly elegant, with its heavy creases, sculpted headlamps and a ground-hugging stance emphasised by a low, wide high gloss front grille. American Designer Chris Benjamin calls it 'a 3D piece of art you can drive'. Pleasantly different then, an observation equally applicable in the cabin. Of course it needs to be good if sales are to be stolen from the likes of the BMW 1 Series and the Audi A3, a tough assignment tackled with an unpretentious 'Designed Around You' philosophy epitomised by the beautifully positioned infotainment screen that, once you've figured out its complicated menus, enables you to deal with audio, navigation, 'phone and other functions almost without taking your eyes off the road. The idea is that, like IKEA furniture, this cabin should be typically Scandinavian, comfortable, simple, intuitive and visually pleasing. And broadly it is. Yes, the storage space on offer is certainly bettered by some rivals (the door bins are tiny for example), some of the stalks could feel a bit more substantial and the trademark 'floating' centre console has rather too many small buttons on it, but these details apart, the overall effect is far more successful than anything Volvo has previously managed, the eye drawn to slick detailing, much of which was optional for original buyers, things such as the frameless rear view mirror and the translucent gear selector. One of the nicest touches that lots of customers opted for from new is the hi-tech TFT instrument display. With the flick of a switch, you can choose between three different dial layouts - an green back-lit 'eco' setting to help you drive more economically, a red back-lit 'performance' mode to better suit for spirited driving and the more usual amber back-lit 'elegance' setting for more comfort-orientated day-to-day motoring. We'd also be tempted by a car fitted out with the lovely optional 'theatre lighting' which can be adjusted through seven mood themes, from red to blue. You can get carried away with things like this and forget more crucial considerations. The seats for example. It's remarkable how little importance we attach to the things we'll be sitting on in our cars, given that we'll be spending many hundreds or thousands of hours in the things, and down the years Volvo has quietly earned a reputation for making the comfiest chairs in the business. This V40 continues that form line with what have to be the most supportive yet wonderfully pillowy seats in the family hatch sector. Courtesy of a curve on the doorsill, access into the back isn't quite as easy as with some rivals, but once you're inside, leg, shoulder and kneeroom are quote good for two adults, courtesy of the way that the seats have been angled slightly inwards to give rear occupants more space and a better view forward. Mind you, that doesn't do much for the centre part of the rear bench, a place you won't want to be confined for any distance. Still, there isn't any contender in this segment able to comfortably seat three fully sized adults across the back over long distances. Headroom is fine, provided you're not ion a plush variant fitted out with the large panoramic glass roof. And luggage space? Well, the 335-litre boot isn't the biggest in the sector, but it is at least 10% larger than a Focus, though that's not saying much. Still, you can make very good use of it if you use the useful twin-floor arrangement, which makes the floor completely flat when you push forward the 60/40 split folding rear bench to free up 1,032-litres of total space - while leaving a concealed storage area beneath. There are hooks for grocery bags and useful options like a hanging load net and an optional 'Load Organiser' to compartmentalise the space and keep your eggs from mixing with your Iron Bru. Should you need to regularly accommodate something really long - say a surfboard or a bike - you'll need to find a V40 whose original owner chose to kit it out with the optional fold-forward front passenger seat. 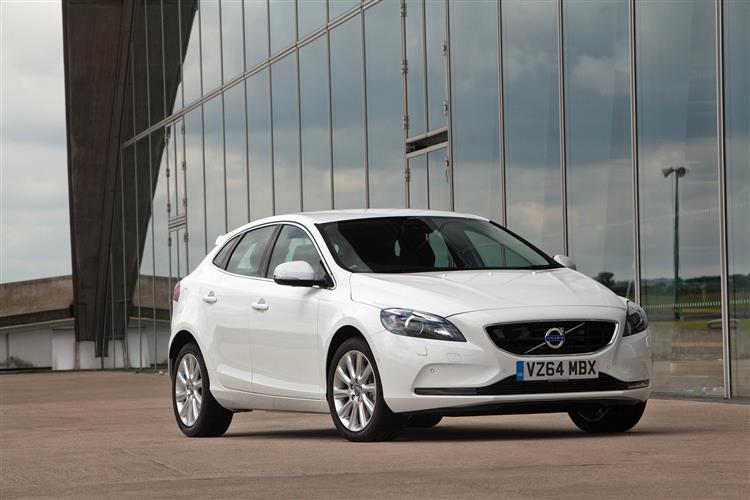