Serious about space? So is Volkswagen's Caravelle. In contrast to the largest conventional MPVs on the market, it'll not only take seven people but all their luggage too, thanks to commercial origins refined by decades of development that have created a quality car-like feel for driver and passengers alike. Ultimately, there isn't much that can do what a Caravelle can. Here, we look at the T5 generation version as a used buy.

The Volkswagen Caravelle. It is, in every way, the definitive extra-large people carrier, developed over half a century of history that has seen this vehicle and its predecessors share and change the lives of countless families in almost every country of the world. Such a simple concept you'd think - a windowed van for people rather than packages - but then the best ideas always are. This one came from a Dutch vehicle importer called Ben Pon who just after WWII, spotted workers at Volkswagen's Wolfsburg factory using a stripped-down Beetle to move parts around. Inspired, he sketched out a platform for a versatile commercial vehicle that would brilliant for business and, with seats and windows, fine for families too. Following the 1950 launch, it was the seated versions that most captured the public's imagination, early versions of which were known by a whole variety of names - the Samba bus, the Kombi, the Microbus or even, in the swinging Sixties, the 'hippie bus'. In America, it was simpler: a people carrying Transporter was just known as a 'Volkswagen Bus'. These vehicles offered simple, utilitarian people transport but by the time the third generation T3 Transporter model was introduced in 1980, Volkswagen thought it had identified an extra market amongst buyers who liked the size and versatility but wanted to move their passengers around in more car-like surroundings. So was born the Caravelle. The T5 version we look at here was based on the fifth generation T5 Transporter van series first introduced back in 2003 and was of course a far cry from the crude but characterful original buses. Fully car-like qualities though, only arrived with the 2010 introduction of the facelifted version we'd suggest you try and focus on, a model which belatedly dispensed with noisy, inefficient direct injection diesel engines in favour of quieter modern common rail power. The result, in this guise, can be almost anything you want - a huge family runabout, an up-market taxi or even a fully-fledged business limousine. This T5 generation Caravelle range sold until mid-2015 when it was replaced by the T6 generation model. 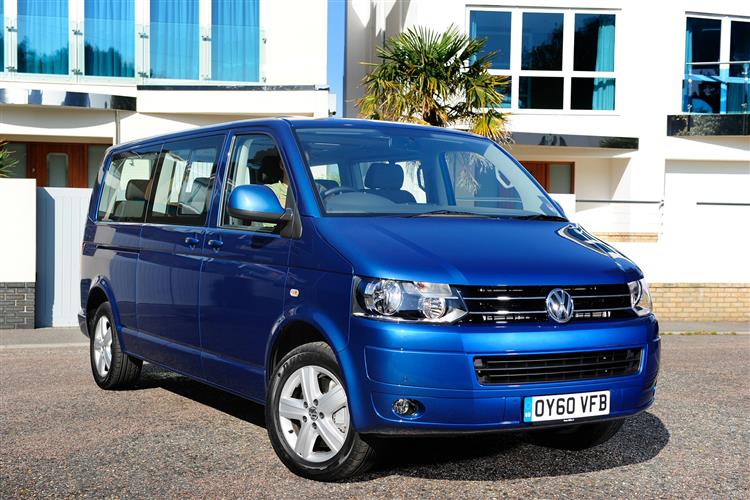