The third generation Mercedes SLK is an everyday-usable sports roadster that, like its arch-rival BMW's Z4, has a neat folding metal roof. Slick detailing, some incredible technology, low running costs and distinctive styling are all part of its appeal. Does this post-2011-era model make sense as a used buy? Let's find out.

The SLK was Mercedes' compact roadster model and sold between 1996 and 2015. Here, we're looking at the MK3 model version, but before we get to deeply into it, time for a re-cap. 'K' in Mercedes model language effectively stands for 'lite', essentially they say, a smaller, more compact but equally desirable version of the same thing. And sure enough, the SLK concept has always been based around delivering a more affordable, more accessible version of the brand's SL luxury convertible to the wider sportscar market. At launch in first generation form back 1996, this car did just that, complete with an innovation of its own, a 'Vario' metal folding top that was quickly copied across the industry. Classed as a sportscar, it didn't drive like one. Instead, people bought it because they liked the badge and the clever roof. Which was fine until other premium brands got around to offering much the same thing with a more engaging roadgoing experience. Forced to up its game, the second generation SLK in 2004 was a big dynamic step forward, a trend the German brand claimed had continued with this third generation version, launched in mid-2011. This car had quite a job on its hands, tasked with changing a whole buying demographic. SLKs up to his point had traditionally been bought mainly by undemanding, style-conscious older female buyers who wanted and could afford something nicer than metal folding roof cabrio versions of family hatchbacks like Peugeot's 308 or Renault's Megane. Keeping these customers while simultaneously appealing to the mostly male-orientated market that would usually opt for a sharper handling rival like an Audi TT Roadster, a BMW Z4 or a Porsche Boxster was never going to be easy. But Mercedes has never been a brand to shirk a challenge. With this car, they aimed to keep the fashionistas loyal with an opulent, more spacious cabin and the option of a 'Magic Sky Control' roof that enabled drivers to switch from light to dark at the touch of a button as they cruised along the Kings Road. Enthusiasts meanwhile would, t was hoped, appreciate classic looks borrowed from the iconic 190SL of the Fifties, powerful engines and a clever optional Dynamic Handling Package provided to get the best from them. This SLK range sold until it was replaced by the SLC line-up in early 2016.

What You Getword count: 649

Different, but somehow still the same is the aesthetic story with this third generation SLK. At launch, designer Michael Plessing rather candidly admitted that the previous version 'wasn't really a classic Mercedes'. Personally, we thought it rather neat, which if true was just as well for many of its long bonnet, short boot roadster proportions were retained by this MK3 model, despite the fact that this third generation version was over 30mm longer and wider, as well as being slightly taller. From the side, where chrome-finned ventilation grilles in the front wings are reminiscent of famous Mercedes-Benz roadsters of the Fifties, you might think this car to be little more than a facelift of its predecessor but from the front, the differences are obvious, clearly defined headlamps and an upright radiator grille creating a look that chimes with the car considered by many Merc enthusiasts as being the 'original' SLK - the legendary 190SL from the 1950s. Styling preferences must always be slightly compromised in metal folding roof convertibles by the need to have somewhere to store all those weighty panels, but the SLK has less of an issue here than is the case with most of its contemporaries. Not that there are that many direct rivals from this era. Collapsible tin-tops have fallen from fashion in recent years, but with this car, Mercedes never considered reverting to the kind of fabric roof favoured by rivals like Audi's TT Roadster or Porsche's Boxster. Instead, they sought to make the folding metal roof trendy again by taking the 'metal' bit from the equation and giving customers the option to order their cars with a dark-tinted panoramic glass top. Or even go a step further and specify that glass panel with, wait for it, 'Magic Sky Control'. Ridiculous name, brilliant concept. Here, the glass roof panel pulses with electro-chromatic technology from the Maybach luxury limousine which at the push of a button, changes its molecular alignment to make the cabin either light or dark. If we were being cynical, we might suggest that you could achieve the same effect by installing a simple blind - but that wouldn't be as fun would it? And after all, a car like this is all about how it makes you feel. Which is what we like most about the SLK. Yes, we're irritated that you can't operate the electrically folding Vario roof at speeds of over 2mph. But in every other way, this is a brilliantly thought-out cabrio. The roof opens or closes in just 20s and can be programmed to work from the keyfob so you don't need to disturb your cappuccino if you're sitting over the road from your car and the heavens open. More importantly for us, it has something that few other convertibles at any price can offer: decent roof-down cabin heating. Not only through the SLS-style 'jet turbine'-look air vents but also through the optional Airscarf neck-level heating system which sees warm air channelled up to the fascia vents and distributed liberally around your ears for feel-good freezing motoring. Behind the multi-function flat-bottomed sports steering wheel, it feels a suitably premium place to be, everything around you feeling as if it's been built to last and the centre console and other trim parts gleaming with brushed aluminium. More traditional optional touches include an analogue clock and original buyers got the alternative of a wood finish. If you've come to this car from an older generation SLK, you'll immediately notice the extra shoulder room which makes the cabin feel significantly more spacious. There are no rear seats of course and precious little boot room either with the roof down - though to be fair, 225-litres isn't bad for this class of car. Both this figure and the 335-litre capacity you get when the roof is up significantly better those returned by this car's closest folding metal-topped roadster rival, BMW's Z4. 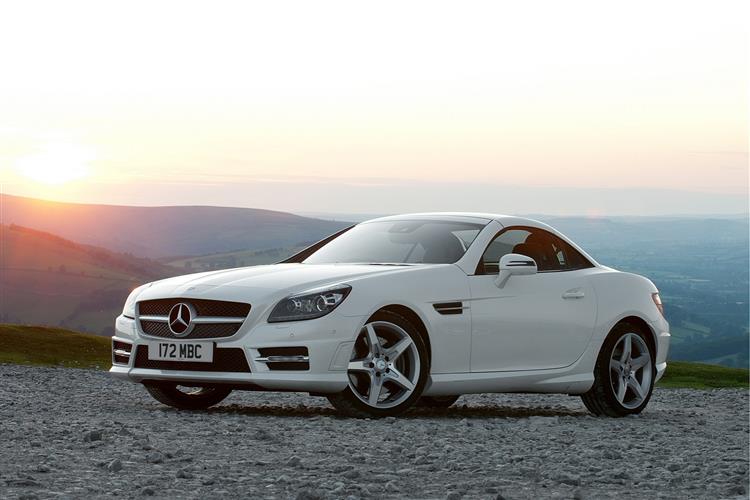