The Citroen DS4 was a desirable sporty five-door hatchback that proudly claimed not to conform to any established market segment. In reality, it's a grown-up Golf GTI-style car based on the more conventional Citroen C4 family hatch, with a coupe look and a slightly higher ride height from which potential buyers can command a rewarding driving experience. A different approach - and a very interesting one.

Talk of a Citroen DS and you should be talking of innovation. That famous badge is, after all, borrowed from that applied to arguably the most innovative car of all time. Flaminio Bertoni and Andre Lefebvre's 1955 original DS mixed style with clever technology in a design which didn't play by established class rules. It was a car that exemplified its brand, much as this one does, the DS4. All right, so this Citroen didn't revolutionise the market in the way that its predecessor did, but it proved to represent an important second chapter in a DS sub-brand created to emphasise the kind of ingenuity that this Galic marque should really be all about. The first instalment of modern day DS motoring was delivered in 2009 by the DS3, a style-conscious 3-door hot hatch aimed at MINI and MiTo buyers who would never have considered the sensible C3 supermini on which it was based. Equally sporty and fashion-friendly - and based on humble C4 family hatchback underpinnings - this DS4 competed amongst slightly larger cars for the attention of family folk who perhaps wished they weren't - or at the very least didn't want to be reminded of the fact. People who, before the launch of this car in 2011, had found themselves buying a whole range of different types of car: plush family hatchbacks, GTis, four-seat sports coupes - even SUV-like Crossovers. In targeting such customers Citroen thought, what could be better then, than to offer up a design incorporating elements from all these categories? A crossbreed if you will. Crossbreeding, as we all know, can be the gateway to the creation of powerful new genes. But it also brought us the labradoodle.. The DS4 sold with Citroen badges until 2015, when the design was taken up by the newly-formed stand-alone DS brand and facelifted. Does the original Citroen-badged version make sense as a used buy? Let's find out.

What You Getword count: 773

We've had four-door coupes. In launching this DS4 model in 2011, Citroen decided that it was about time that we had a five-door one. The stylists of rival models like SEAT's Leon and particularly Alfa Romeo's Giulietta were quick to claim that this concept was nothing new. Citroen begged to differ, pointing out that the coupe lines of this DS4 were more extreme and that, uniquely in this case, they were matched to the kind of high-ish Crossover-like stance that's so in vogue these days. At first glance, your eyes are drawn to the sculpted wheelarches, the chrome-finished waistline and the dark tinted windows. Move to the front and you'll find completing the look the prominent stacked boomerang-shaped LED daytime running light clusters that provide the family resemblance link to the brand's smaller DS3 model. It's all very different from Citroen's simply-styled C4 family hatchback upon which this design is based, a car which is 60mm shorter and 40mm taller and manufactured in the same French Mulhouse factory. So the same people screw the two products together - but apparently with a bit more love in the DS4's case to reflect the extra care and precision that the DS brand is supposed to require. We're not quite sure what that says about the way a C4 is built but there's no doubt that this car has the feel of a premium product, with lovely design touches like the way that the rear door handles are encased in the extended rear window frames. This is intended to add aesthetic credence to Citroen's insistence on this model being seen as a 'five-door coupe', a concept you have to buy into if you're to forgive some of the compromises it's forced upon those inside. More accurately, those at the rear. So let's start with the back seat package. Small-ish door openings and slightly intruding rear wheelarches mean that getting in isn't as easy as in a conventional Focus-sized family hatch. But then this isn't a conventional Focus-sized family hatch. It's something you'll discover taking a seat in the back, adjusting to slight restrictions in both head and legroom and noticing the shadow those huge rear pillars cast over the back section of the cabin. Better to think of this as the coupe Citroen is determined it should be. Viewed in that light, it's all pretty practical in the back and quite OK for two adults or three children, as long as the journey isn't too long. Indeed, if you're in that frame of mind, you might even be quite happy to forgive the fact that the windows don't open, which with the tinted glass can make things feel a little claustrophobic in the rear. That's because the sweeping rear haunches ensure that there's nowhere downwards for the glass to go. At least that saves 3kgs per door. In complete contrast, up-front, it could hardly be more spacious and comfortable. The first thing you'll probably notice after taking a seat is the panoramic windscreen, offering front occupants a 45-degree view upwards they can choose to avoid on really hot days by pulling down individually sliding sun blinds, each equipped with a courtesy mirror. If you don't use them, then you get a cabin that has a really airy feeling accentuated by the slightly raised driving position. Once comfortable in front of the curvy fascia ensconced in the figure-hugging seats, you face a three-instrument binnacle that fuses analogue and digital displays in a layout that looks nice but isn't always instantly easy to read. But overall, this feels a special place to be, especially if the model you've chosen enjoys some of the finer DS4 details - highlights being the aluminium-drilled pedals, the embossed door handles and the two-tone leather trim with its 'bracelet' stitching pattern, said to resemble the links in a watch strap. The air conditioning offers three different levels from soft to intense, the light colours on the instrument panel can be fine-tuned to your taste from cool white through to incandescent blue and you can even programme the functionality sounds of the car to suit your mood. 'Urban Rhythmic' anyone? As for practicality, well there are lots of storage spaces and, appropriately for a French car, door bins generous enough to accommodate a bottle of wine. When it comes to larger items, the boot is 21-litres smaller than this model's Citroen C4 stablemate, but at 359-litres (or 385-litres if you use the under-floor storage), it's still slightly larger than the trunk provided in Alfa Romeo's Giulietta - or even in Volkswagen's Golf. Push the seats forward and the volume rises to a useful 1021-litres. 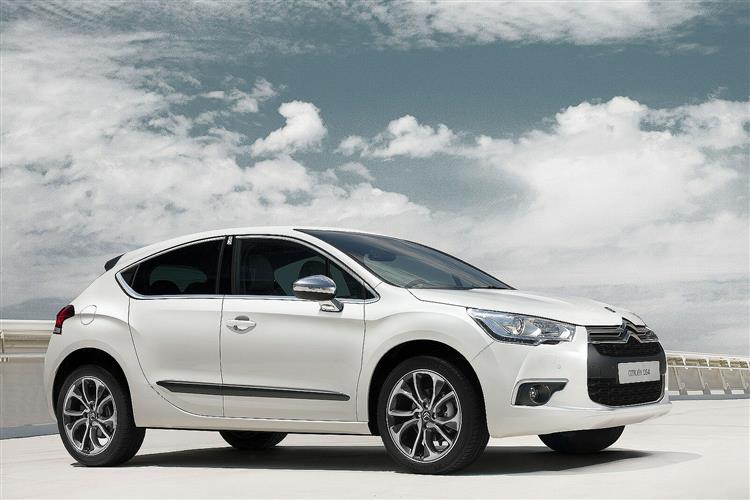