MORE OF AN X-FACTOR (some text hidden)

Subaru is a company discovering that the traditional rules of car building just aren't valid any longer. Customers are demanding more adventurous products that cost less to run and offer new levels of style, safety and versatility. Which is why the brand's XV Crossover model proved to be so important for the company. It was originally launched in 2012 but was priced to look more expensive than it should have been. A year later, with exchange rates looking a little more favourable, the importers were able to re-position this car, improving equipment levels and deleting the slow-selling 1.6-litre petrol unit from the range. It's this improved version of the XV that we're going to look at here, a car sold until 2015 when a mild facelift improved its proposition still further. Does it make sense as a used buy?

The Crossover. Arguably, it's the motor industry's fastest growing market segment and in Subaru's XV, that's exactly what we have here. By now, you're probably familiar with the concept behind this kind of car, but even if you're not, you're probably well acquainted with the end result. Whether packaged as Ford Kuga, a Peugeot 3008 or, most successfully, as a Nissan Qashqai, the idea's the same. A family hatchback with SUV attitude and none of the clunky connotations associated with Freelander-style small 4x4s. Virtually none of the off roading capability either - or the solid toughness. Some Crossovers don't even bother with a 4WD option and those that do limit it to ridiculously pricey derivatives. Crossovers, in other words, are these days more about fashion than substance. But what if you could get one with Qashqai-like style matched to Freelander-like off road capability? What if this class of car, in other words, could actually walk the walk as well as talk the talk? That'd be quite something. That'd be unique. And that's exactly what this XV claims to be designed to deliver. If any brand was going to be able to create a car able to do this, you'd put money on Subaru to do it. They were building models of this kind way before the concept became fashionable, with a history going all the way back to 1995 and the launch of the Legacy Outback, a chunky all-wheel drive estate then followed by more overtly SUV-like Forester and Tribeca designs. None of which really caught the imagination of British buyers. But this car did. The version we're going to look at here sold between 2013 and 2015.

The XV's basic shape is a fairly faithful representation of the crossover norm but it's got a purposeful, chunky stance and some very interesting details. The front end is very neatly finished with shapely headlamp pods, a gaping air intake below the number plate and a recognisable Subaru grille. Moving back, you get Audi allroad-style wheelarch extensions that look agreeably rugged and at the back end, a tidily finished rear bumper with dark cladding extending back from the rear wheel arch. You lose a lot of the contrast if you go for a dark paint shade, so choose your colour carefully. Inside, the cabin is a step up from the rather plasticky efforts that Subaru has managed in recent years - but it still doesn't quite have the quality feel you'd find in the best of this car's European rivals. Some of the ergonomics are a little haphazard too, such as the temperature controls at the bottom of the centre stack and the digital readout at the top. Or the way that the seat heater switches are hidden away behind the handbrake. There's some compensation to be found in the build quality though, which matches the rugged, built-to-last feeling that pervades across the rest of the car. There are some nice details too. Like the way the heater controls are large and chunky enough to be used by a gloved hand. And the way that the USB and aux-in points are nicely stashed away in the closable compartment between the seats. Accessibility to the back is helped by doors that open wider than those fitted to many competitor models. Once inside, Subaru talks of room for three adults, but the high centre transmission tunnel will make that difficult to achieve on all but the shortest journeys. It'll be fine for three children though. On the plus side, the XV's comparatively long wheelbase gives a decent amount of rear legroom, the space available helped by front seats that you can get your feet comfortably under. Out back, the 380-litre boot capacity is less than most rivals offer, but there is a small under-boot floor compartment and of course you can extend the capacity by pushing forward the rear bench - to 1270-litres, though the seats don't fold totally flat. 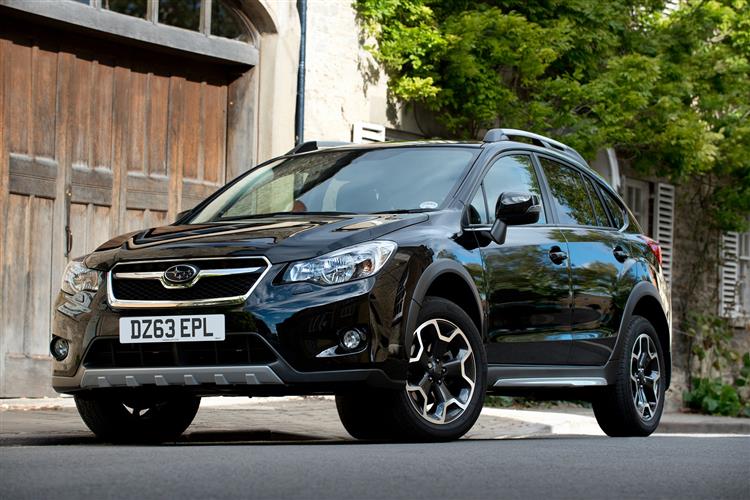