E FOR EFFICIENCY (some text hidden)

The Mercedes-Benz E-Class has a reputation for buttoned-down efficiency. It's one continued by this vastly improved eighth generation version which retains a sensible side but dials up the desirability, aiming to offer a smarter, more prestigious approach to Executive class motoring than its closest German rivals. It does so with efficient engines, astonishing technology and comfort that makes you question the need for a larger luxury saloon.

No car epitomises what Mercedes-Benz stands for better than this one - the E-Class. We've known it by that name since 1986 but the history of this model actually dates all the way back to 1953 and the introduction of the original 'W120' series design, widely regarded as the brand's first truly modern motor car. And this model has remained truly modern throughout the eight generations since, pioneering everything from safety passenger cell technology to turbodiesel engines, innovation that continues here in this much improved 'W212' series version, the most comprehensively revised Mercedes-Benz ever. And it needs to be. Much, after all, has happened in the executive saloon sector since this MK8 model E-Class was first introduced here back in 2009, with all-new versions of both its main competitors, the BMW 5 Series and the Audi A6, as well as stronger opposition from lower volume segment rivals like Jaguar's XF and the Lexus GS. No longer was it enough for the Stuttgart's most important car to be merely big, refined, efficient and classy. Extra technology was needed - and a bit of extra character too, both of which are apparently provided by the vastly improved eighth generation version introduced early in 2013, the car we're going to test here. You'll recognise it by its more curvaceous nose but beyond the smarter look lie the more important state-of-the-art virtues this E-Class will need if it's to continue to be its maker's most profitable model. As before, its market appeal will be vast, with private buyers the focus of pretty Coupe and Cabriolet versions and the far larger business sector targeted by the saloon and estate variants we're going to talk about here. One of these must be almost all things to all commercial people, as appealing to, say, a taxi operator in ordinary base diesel form as in higher spec it will be to a top executive. It must, in short, be a very thoroughly developed product indeed. Let's put it to the test.

What You Getword count: 549

Mercedes is usually careful not to meddle too fundamentally with the things that define its most popular products, especially when it comes to aesthetics. Here, it's different. E-Class customers who previously defined this car by its twin headlamp set-up and that prominent Three-Pointed Star atop the traditional upright lamella grille must now get used to quite a different look. The traditional bonnet mascot's gone, replaced by a larger brand badge in the centre of a more prominent front grille flanked by a redesigned pair of curvaceously flowing headlamps. These now operate within a single lens that incorporates flowing light elements intended to maintain the typical four-eyed look that has come to characterise this car. The swept-back bonnet has also been restyled so that its contours merge elegantly with the smartened front end, while at the side, the shape appears to have been stretched thanks to a sharper creaseline beginning on the rear doors and extending into the tail lights. These have also been smartened, with a two-tone look and LED technology that offers up a distinctive nightime visual signature. We're talking then, of a package of changes that go a bit further than you'd expect from a mid-term facelift, an approach continued on inside. Slip behind the wheel and smarter materials with meticulous detailing serve to raise the perceived quality and functionality of this car. There's a redesigned centre console too, with extra storage space making up for the fact that the door pockets are as small as ever. As before, you sit quite low and you'd be excused for some initial confusion with all the stalks, paddles and buttons that need to be mastered on the nappa-leather-trimmed multi-function steering wheel, along with the endless menus of the standard COMMAND infotainment system whose 7" colour screen dominates the top of the dash. But you quickly adjust, not only to these but also to familiar E-Class anomalies like the foot-operated parking brake and the steering column-mounted gearstick. And once you have, you're set to more readily appreciate ergonomic design that's just that bit more special this time around. Perhaps it's the lovely analogue clock positioned between a smarter set of dash-top vents. The tight, precise panel gaps. Or the Artico stitched leather trim on the dashboard and the beltline of the doors. Moving into the back, the large door aperture aids easy entry and once inside, headroom is good, though there's not quite as much rear legroom as the car's dimensions might suggest. It's quite enough for long distance comfort though, provided you're not stuck in the middle where you've to straddle a prominent propshaft tunnel. Out back, the 540-litre boot is slightly bigger than you'll find in a BMW 5 Series, an Audi A6 or a Jaguar XF and for not much extra, you can have it with this neat pull-down Easy Pack boot box. Unfortunately, the option to extend the cargo area with a useful 60:40 split-folding rear bench is an expensive extra. Still, if that's something you're likely to be doing on a regular basis, you'd be better off looking at the spacious estate version, which ups luggage capacity to a 695-litre total, extendable to -1950-litres by flattening the back seat. That's significantly more than rival BMW 5 Series Touring and Audi A6 Avant models can offer. 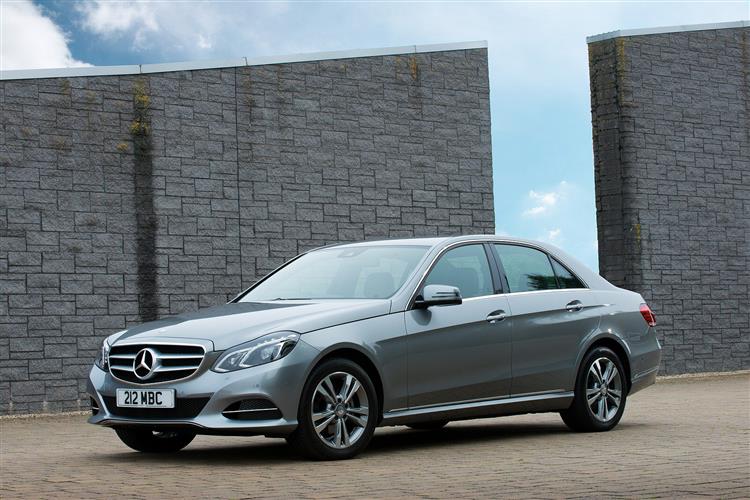