Peugeot's 2008 Crossover offers an arguably more sophisticated take on the kind of little urban SUV-style design popularised by cars like Nissan's Juke. Supermini-based, it offers all the advantages of that compact runabout you were thinking of, together with added space, style and poor weather driveability you probably never expected to be able to enjoy on a small car budget.

Fashion can take many forms, especially when it comes to cars. Here's one of them, the compact crossover, epitomised in this case by Peugeot's 2008, launched in early 2013 as the French brand's entrant into one of the market's fastest growing and trendiest segments. It's existence came about through the success of one standard-setting design. In 2010, Nissan's Juke showed that if you took a supermini and re-bodied it with wilfully outlandish, higher-set SUV-style looks, then strong sales would inevitably follow. Following that, we saw a wide variety of different approaches in this sector, with Renault's Clio-based Captur model at one end and cars like the MINI Countryman and the Ford EcoSport at the other. In between lay contenders like the Skoda Yeti, the Vauxhall Mokka and the Chevrolet Trax. This 2008 was one of the more affordable takes on this trend, there to enable a small, fashionable family to get a foothold in this growing market niche. Based heavily on Peugeot's 208 supermini but with extra space and flexibility, a higher-set driving position, more individual looks and the option of mild off road ability, this car seemed to offer plenty more for your money - without too much of a price premium. Here we're looking at the initial version, which was replaced in mid-2016 by a facelifted model.

What You Getword count: 681

This isn't one of those wilfully ostentatious small Crossover models. Back in 2013, Peugeot clearly felt that this youthful market was now ready for something a little more sophisticated than the Max Power imagery of a Nissan Juke or the concept car looks of a Renault Captur. So they brought us this, essentially a version of their 208 supermini subjected to a bit of body building which has left it 200mm longer, 96mm taller and 25mm wider. The front is dominated by this upright 'floating' grille, flanked by imposing headlamps supposedly styled to outline a cat's pupil. But arguably the defining element in the design is to be found in the side profile where this curious kink above the centre B-pillar rises up to meet the chromed roof rails. At the rear, LED tail lamps that light up with a so-called 'luminous claw' motif frame the 2008's subtle shoulder line. The result, as we've suggested, may not be the most overtly styled car in its class, but it's quietly handsome in a way that's old-school Peugeot. It's practical too. The boot - 20% bigger than a 208 and 30% bigger than that of a Nissan Juke - offers 360-litres, about the same as you'd get in a rival Renault Captur or Vauxhall Mokka but, we'd suggest, is a little more usable - for a couple of reasons. First, the usefully low 60cm loading lip, trimmed with a brushed stainless steel protector. Second, the way that the 60/40 split-folding seatback goes down completely flat to reveal 1,194-litres of space and is trimmed with five rails that make sliding objects forward that much easier. Six chromed hooks allows objects to be tied down and there's a 22-litre under-floor compartment to keep valuable items out of sight of prying eyes. And rear seat accommodation? Well it's best to remember that under the skin, 67% of this car is identical to the 208 supermini it's based upon - and that includes the wheelbase. So despite the fact that this 2008 Crossover is longer, wider and taller than its donor car, the cabin space it offers isn't ultimately that much different. Nor do you get the kind of sliding rear bench Renault offers on its Captur model to improve things. What it all means is that two adults - even a couple of six-footers - will be reasonably comfortable but three will be a bit of a squash. It's all a lot more spacious though, than a rival Nissan Juke and feels particularly light and airy with the optional top-spec panoramic glass roof fitted. Which brings us to the thing that may really sell you this car - the up-front cabin. There's nothing else in the class than can approach the quality feel you get here thanks innovative design - like the 'aircraft-style' handbrake - and a careful choice of materials finished with classy touches like the satin chrome highlights. Up-market trim levels feel especially nice, with beautiful roof lighting, a stitched, soft-touch dash and blue LED backlighting surrounding the head-up dials. You view them over the top of a tiny steering wheel, the adjustment of which requires a bit of fiddling around until you get it to a point where it doesn't obscure your view of the gauges, something not everyone may be able to manage completely to their satisfaction. For most though, the benefits will be well worth having: wrist-flick steering feel and dials much closer to your line of sight on the roadway ahead. The other innovation at the wheel is what looks like a tablet PC attached to the fascia. This multifunction colour touch screen is standard on all but the very cheapest entry-level models and as you ascend the range, more and more features are built into it. If we're honest, we'd have to say that the user interface isn't the most intuitive we've come across, particularly if you're trying to navigate through the various menus on the move, but like most of these things, after a few days acclimatisation, you'll be flicking through the various screens without a second thought. 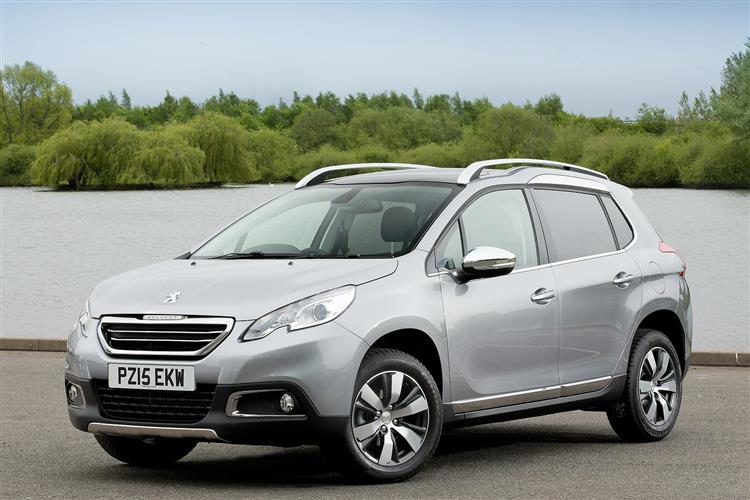