A FOR EFFORT? (some text hidden)

Mercedes-Benz is a company often portrayed as being deeply conservative, though in fact, no other manufacturer has such a record of innovation. Today, the brand is bold, forward-thinking and younger in feel, attributes very much in evidence in the third generation version of its smallest A-Class model, which was pitched more directly against sporty premium compact family hatches like Audi's A3 and BMW's 1 Series. It was the first truly desirable small Mercedes.

Not every auto maker can produce a compact premium family hatchback - but every one of them would like to. The limiting factor of course is brand equity: the 'badge-on-the-bonnet' factor that sugars the pill for executive down-sizers and provides the incentive for Ford, Vauxhall and Peugeot people to better themselves. Only a handful of manufacturers have it and even those that do often cast envious eyes towards the instant driveway credibility that comes with the Three-Pointed Star and a car like this one, the third generation Mercedes A-Class. You'd think then, that this market segment would be tailor-made for the Suttgart maker. And perhaps it would have been if we'd had a sporty, low-slung contender like this one from the start. But we didn't. What Mercedes originally offered us in the first and second generation A-Class models we saw from the turn of the century was a tall, boxy and rather frumpy thing that was rarely even considered in press and public comparisons between the two premium family hatches that should have been its closest rivals, Audi's A3 and BMW's 1 Series. Yes, the original A-Class concept with its high-set sandwich floor construction was clever. But clever doesn't cut it in a market dominated by cool sportiness. So Mercedes started again in creating the third generation version launched in the Autumn of 2012 and managed to bring buyers in the premium compact hatch segment exactly what they seemed to want. A car that no longer went its own way but instead had a smart, sporty and more conventional feel. It was a design created specifically to beat its two biggest rivals at their own game and in many senses, it did just that, selling successfully until a facelifted version was launched in the Autumn of 2015.

What You Getword count: 891

If you think of clever, forward-thinking British design as something belonging to your father's time, then check out one of these. Modern, extrovert, radical, this third generation A-Class is everything its predecessors weren't - and was penned by Englishman Mark Featherston, a graduate from Coventry University's School of Transport Design and the man who designed Mercedes' SLS AMG gullwing supercar. Of course, radicality is something that generations of A-Class buyers are already familiar with. First and second generation models after all, were pioneering in their way, thanks to an innovative sandwich floor construction designed to accommodate batteries or other equipment for models with alternative drivetrains that in the event, never made it beyond the prototype stage. More importantly, the layout meant that in a violent frontal impact, the engine and transmission could slide underneath the floor below the pedals rather than entering the passenger compartment. It all sounded great, but also dictated the need for a short, high, frumpy shape that most buyers in this segment simply didn't like. So instead, with this MK3 model, we've a design that's longer, wider and lower, with the same kind of bluff nose and high shoulder line that you'll find on a rival BMW 1 Series but here created as part of a much more cohesive look. With sharply defined edges and tautly-drawn convex and concave surfaces which seem to constantly change as the light catches them, it's quite extrovert in its finishing in a way seen in niche market sporting Mercedes models like the CLS and the SLS, but never in a mainstream design like this one. That means it'll divide opinion of course, but what you can't argue with is the fact that there's a certain self-confidence to this car. The pronounced front end has a prominent V-shape, with the Three-Pointed Star mounted in a two-louvre grille above three lower air intakes in the bottom section of the bumper. Along the flanks, where influences apparently came from sand dunes, winter landscapes and even Concorde, a rising beltline enhances the wedge-shaped profile, while another line rises from the mid-point of the front wheel arches to create powerful shoulder muscles at the rear, the intention being to give the car a coupe-like stance, set off by a roof spoiler that neatly hides all the aerials. And inside? Well, if anything, the cabin treatment is even bolder than that of the bodywork, this yet another interior inspired from the world of aviation, with your eye immediately drawn to the five circular air vents, styled to resemble jet engines and finished in 'cool touch' electroplated metal trim. Ahead of you through the three-spoke multi-function steering wheel lies an instrument cluster made up of two large round dials, each with a smaller dial set within. Perhaps the most interesting design touch though, is what looks like an iPad sitting on the upper part of the centre console but which is in fact an integrated infotainment system, able to sync seamlessly with most smart 'phones. What else? Well, a little unusually, the dash doesn't sweep round into the doors, a design quirk that's less noticeable if you've got a car specified with the lovely stitched leather upper dashboard covering that really lifts the cabin. Another optional touch we love is the optional illuminated door sill plates that welcome you as you step in. All-round visibility is better than the low-slung seating position and thick pillars might lead you to expect, though views out of the back are a little compromised by the small rear window. The materials used don't quite have the rich, deep hewn-from-granite feel you get in an Audi but it's a step up from a BMW 1 Series and, overall, probably the most interesting cabin in the class, a classy effort with plenty of showroom feelgood factor. As for space in the back, well the curve of the rear side windows and the amount that the rear wheelarches intrude into the door openings mean that getting in isn't quite as easy as it would be in, say, a Focus or a Golf. Once installed inside though, even a couple of six-footers should be reasonably comfortable, thanks to these scalloped cut-outs at the back of the front seats. We wouldn't though, put too much store in Mercedes' claim that this is a five seater, a statement which seems to be at odds with the way that the rear cabin has been styled very much to suggest accommodation for two. Three children will probably be fine though. And the boot? Well the heavily styled rear light clusters do necessitate a rather narrow opening, but once you get your stuff inside, you'll find nearly as much space as you'd get in an A3 or a 1 Series - 341-litres with the rear seats up or 1,157-litres with them folded. You don't get quite the same level of versatility that owners of original A-Class models will remember - the rear seats aren't removable for a start, and when folded, they don't go completely flat, one reason why total luggage capacity is 94-litres down on that available from the apparently smaller second generation A-class model. Still, on the plus side, items more than a metre wide can fit between the wheel housings and you do get some extra space beneath the boot floor to keep valuables away from prying eyes. 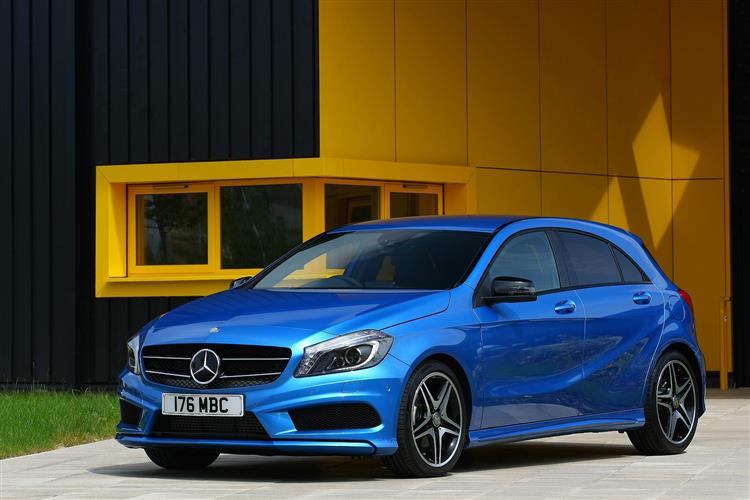