THE AVS AND THE AV-NOTS (some text hidden)

Anyone doubting Chevrolet's ability to build a class-competitive used supermini needs to try this one, the second generation Aveo, sold here between 2012 and 2015. Smartly styled and, in diesel form, smart to run, it's a budget brand small car you actually might feel rather good about owning.

Before 2012, Chevrolet was never able to deliver a truly class-competitive supermini. Though the brand's little Matiz and Spark citycars attracted a reasonable following in the years after the brand's re-launch in the UK in 2004, buyers looking for something a little larger and Fiesta-sized were only in this period offered a series of fairly lightly disguised variations on the old Daewoo Kalos, a design dating back to 2003. Which was fine for emerging Asian markets: not so good for more demanding Europeans. People who the company hoped in 2012 would take to this car, the second generation Aveo model. Back then, on paper, it certainly seemed as if the designers, engineers and marketing people had ticked all the right boxes. There was a more distinctive look than the previous Kalos model had offered, plus a more efficient range of engines that at last included some properly frugal diesel options. In addition, buyers benefitted from the usual emphasis on high spec and value pricing to enable the car to better compete against fellow budget brands like Skoda, Kia and Hyundai. All this was supposed to be bound up in a product that promised to save its owners money without constantly reminding them of the fact. It all sounded quite appealing, but UK sales were relatively slow, buyers preferring instead to find the small amount extra to get themselves into the kind of Vauxhall Astra that tended to sit on the other side of a Chevrolet dealer's UK showroom. The Aveo vanished from the UK market at the end of 2015 with the Chevrolet brand's demise on our shores.

What You Getword count: 555

At the launch of this car, Chevrolet said it was a bit fed up with small cars being cute and cuddly. The intention instead with this car was to create something bolder, more striking and with a dose of attitude. Hence a set of progressive, raked bodylines, pronounced wheelarches and, most notably, the apparently motorcycle-inspired design theme that crops up all around the bodywork. It's most obvious at the front where the familiar bow-tie-badged split-front grille is flanked by exposed, round headlamps, twin tubes with high gloss round bezels and chromed rings that do without the usual lens cover and certainly give the front of the car some character. It's a look carried forward to the tail lamps too, not quite as successfully, though the curved rear hatch glass and integrated spoiler look smart and neat. Lifting the tailgate reveals a 290-litre boot within spitting distance of that of a rival Fiesta in size and practically shaped, provided you can lift your luggage over the rather pronounced lip that sits proud above the rear bumper. There are tie-down hooks to secure loose loads, an under-floor compartment can conceal more valuable items and there's a neat slot on the seatbacks into which the parcelshelf can slot when not in use. Pushing forward the 60:40 split-folding rear seats reveals a class-competitive 653-litres, though unfortunately, the area provided isn't quite flat. To take a seat in the back, you first need to locate the rear door pull handles, cleverly concealed in the upper section of the door in a largely unsuccessful attempt to give this five-door-only design a coupe-like look. Once inside, you've the usual supermini standard - comfortable space with decent headroom for two adults or three children but three fully-grown passengers might find it a bit of a squash. Up-front though, there are no issues in getting comfortable, not only because of the spacious cockpit but also thanks to a smart three-spoke reach and rake-adjustable steering wheel and a height-adjustable driver's seat that gets a comfortable armrest if you're in a plusher model. And the centre console's Vauxhall Insignia-sourced big buttons and clear controls are easy to use. But all of that you'd expect from a modern era supermini. What may come as a bit of a shock to this car's traditionally older clientbase is the design of the instrument cluster in front of you with its faux drilled casing, again motorbike-inspired, incorporating a round speedometer and a digital LCD readout. At least it's memorable. Less controversial and more immediately pleasing is the 'dual-cockpit' design of the interior, apparently inspired by Chevrolet's iconic Corvette supercar, with a wrap-around design that flows neatly into the doors and smart ice-blue ambient backlighting. It's certainly a practical cabin, with an under-seat pull-out drawer, a small slot in the centre console that holds parking tickets or cards, three cupholders (two at the front and one for those in the rear) and large pockets on either side of the centre console offering easy-to-reach storage areas for mobile 'phones, CDs and other little odds and ends that would usually rattle about while you drive. Some of the electronic stuff might be better placed in the higher of the two gloveboxes, since there, you'll be able to charge things up and connect USB sticks and the like through to the car's audio system. 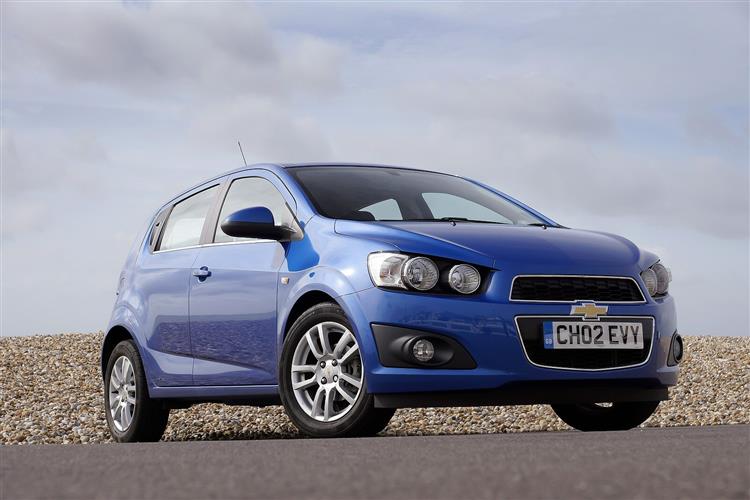