You're looking here at the first mainstream family car developed from scratch around both conventional combustion and Plug-in hybrid power. Few expected Mitsubishi to be first to market with such a thing but with this third generation Outlander crossover model, the brand stole a march on many of its rivals. It can seat seven, take you properly off road and even make its own kind of eco statement. You can't ask much more from family transport than that. How does it stack up in used guise?

Haven't family cars come a long way? Look at this one, Mitsubishi's third generation Outlander. It can carry seven and conquer the lower slopes of Ben Nevis while delivering the kind of running costs you'd expect from an ordinary family estate. It's a Crossover with a conscience - and a mission. At the launch of this model n 2013, Mitsubishi emphasised its technological superiority by previewing a top PHEV petrol/electric Plug-in Hybrid version, with headline fuel economy and CO2 figures to embarrass the cheapest, most frugal citycar. This variant was introduced in 2014. Did we ever believe we'd really see an SUV-styled four wheel drive family car green enough to gain its owners a place on the Friends of the Earth Christmas card list? Well, it's a reality with this Plug-in petrol/electric Outlander. This car was also available with a more conventional 2.2-litre diesel engine. Where the previous second generation Outlander model had shared its design with badge-engineered Peugeot and Citroen rivals, this MK3 model was all Mitsubishi's own, with sleeker looks, more frugal running costs and plenty of extra state-of-the art technology. It appealed to customers considering, say, a soft roading Honda CR-V or Toyota RAV4 but wanting something more spacious and versatile that was a little more forward-thinking than bigger 7-seat Kia or Hyundai Crossover models. This MK3 model was facelifted at the end of 2015. It's the pre-facelift versions we examine here.

What You Getword count: 776

Mitsubishi's design team had plenty of time to come up with this third generation Outlander's rather distinctive shape. At launch in 2013, this was the first all-new model the brand had produced in nearly three years. It's a softer, less overtly SUV-style look that marked a fresh aesthetic direction for the brand, with high flanks, a raised beltline, uncluttered surfaces, strong shouldering and soft-contoured bumpers. It's quite slippery too for something you might expect to be boxy and bluff, the 0.33Cd drag factor sleeker than that of a Nissan Micra. We're also impressed by the way the styling artfully disguises the size of this car - though the tape measure actually suggests it to be a little more compact than you might think. This vehicle's footprint is, after all, no bigger than that of a Ford Focus. Up-front, the slim aerodynamic grille is trimmed with unusual hockey stick-shaped chromed strips and flanked by sculpted wrap-around headlamps. Moving to the back, horizontal trim between the rear lamps is supposed to add visual width and give the car a more planted stance. A little disappointingly, it's a one-piece tailgate rather than the split-folding affair found on the previous generation MK2 model, perhaps because Mitsubishi wanted to follow the prevailing fashion of providing optional power operation. A pity that it opens slower than your father-in-law's wallet. Once raised, you'll find revealed a luggage space that's necessarily very small if all three seating rows are in use - just 128-litres. Fold the separate third row chairs into the floor though and you get a 950mm-long load space with a useful 591-litre total capacity that pretty much applies even if you opt for the PHEV Plug-in hybrid version. Less impressive is the extended capacity with both rear seating rows folded. Though the 1.69m floor length this creates is 335mm more than the previous generation model, the 1,022-litre total load capacity figure lags some way behind obvious rivals. Still, it'll probably be sufficient for most owners. And at the wheel? Well efforts have clearly been made to give the cabin a bit of a lift over the plasticky, utilitarian feel that characterised the old model. This was, after all, the first Outlander - and arguably the first Mitsubishi - to get soft-touch interior plastics. But they're not as evident as they would be in, say a Volkswagen Tiguan, nor does the build, fit and finish feel as bulletproof. Which is a pity because all the evidence in every customer satisfaction survey going says that it is and that an Outlander will offer a far better long term ownership proposition. It all comes down to subjective perceived quality. If this Japanese brand can just up that a few more notches in its products, then the German brands really would have something to worry about because in terms of technology, space and structural integrity, this car's otherwise right on the money. Everything's certainly easy to use, though some of the big, chunky buttons are a little hard to find and the sat nav and stereo can be fiddly to use. There's a lovely three-spoke leather-trimmed wheel that adjusts for both reach and rake, through which you glimpse a well designed instrument binnacle with two big dials and a nice old-school fuel bar graph. There's a selection of eco driving displays too, though some might be seen to be a touch gimmicky. Moving back into the second row, there's reasonable space for two adults - or three at a squash, though taller folk may feel the need to recline back the adjustable backrests. The main news here is the great flexibility you get thanks to the way the bench can slide backwards and forwards by as much as 250mm - that's a range three times greater than that of the old MK2 model. Which certainly helps make the third row seating more usable - where fitted of course. You can only have two rows in the PHEV hybrid model, which is a pity, this seemingly the only area of practicality that was compromised by the battery installation. Assuming you have chosen a model in which seating is possible in the luggage compartment, you access the rearmost section of the car via this sliding 'walk-in' function and head in to find that instead of the MK2 Outlander's uncomfortable fixed bench, there are here two separate properly-sprung seats with integral head restraints and reclining backrests. They're still only really meant for children or adults who you don't like very much but at least there's the feeling that this Mitsubishi is now a proper seven-seater, rather than a crossover with a couple of midget perches in the boot. 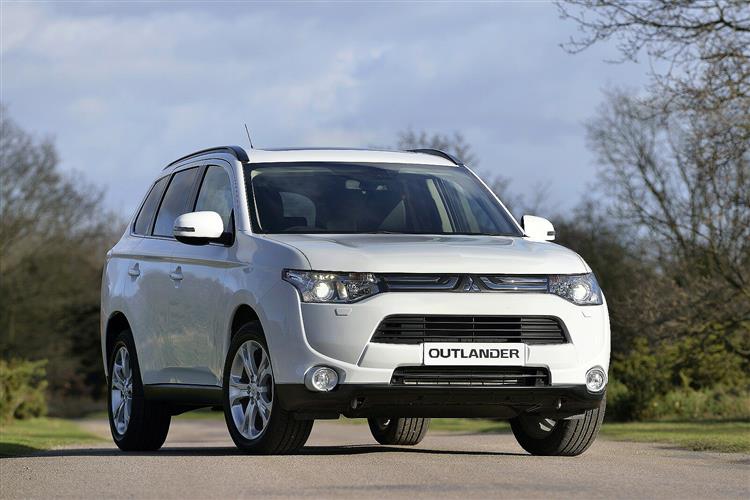