ALLROADS LEAD TO THE A4? (some text hidden)

If you're a buyer in search of a used compact executive estate and you like the idea of an all-wheel drive Audi A4 Avant with extra road presence and enhanced ability in slippery conditions, then the German's brand's A4 allroad model may be right up your street. The first version of this car to be offered was on sale between 2009 and 2015 and was targeted at those who appreciated the virtues of a plush compact SUV but couldn't bear the thought of being seen in one. It may not be the prestigiously-badged, sensibly-sized 4x4 you dreamed of but it could be the one you actually need.

Buying an SUV always smacks of using a sledgehammer to crack a nut. It's fair enough to want your family car to be able to tackle snowy roads, muddy carparks and icy February country back doubles but is it really necessary to buy something capable of crossing the Serengeti to do it? Of course, most modern 4x4s would get stuck fairly early on into your average desert but they still carry far more technology than is required to cope with such modest expectations. Which is why a car like this one, the Audi A4 Allroad sold between 2004 and 2009, would seem to make a lot more sense. Audi's allroad concept is pretty straightforward. Take one of their standard quattro all-wheel drive Avant estates, then give it a bit of extra ride height and some body cladding to protect the bodywork (or more likely, to remind the neighbours what you've bought). That and a few electronic tweaks are enough to make the car suitable for mild off road use. We're not talking about rock-strewn mountainsides or extreme wilderness river crossings here but the kind of unmade roads and muddy tracks that owners might encounter and which might damage an unmodified vehicle. Prior to the launch of this model in 2009, Audi had been perfecting this kind of concept for over ten years, initially with the large A6 allroad model that took on executive offroad estates like Volvo's XC70. Clever height-adjustable air suspension always made that A6 surprisingly able on the rough stuff but this slightly more compact A4 allroad model didn't need that kind of sophistication in the wider, slightly more affordable sector of the market where the German brand was pitching it. Here, it was sold as a plusher alternative to tough all-wheel drive estates like Subaru's Forester, Saab's 9-3X and Skoda's Octavia Scout. The car lasted until the launch of the fifth generation Audi A4 range in the Autumn of 2015.

So, if Audi's right and A4 allroad customers aren't buying this car to go off road, just why are they buying it? Image perhaps? The plastic cladding, redesigned grille and under-bumper section, side sills and tough-looking wheel arch extensions certainly lend it a purposeful air that's continued inside where shiny sill plates, special upholstery and various unique dashboard applications give it a slightly more rugged ambience. You'll certainly feel rugged if you drive it on a muddy farm track, then get out, since the lower parts of the doors collect mud from the 17-inch tyres, swiping on your legs with every entry and exit. Basically of course, this car shares the standard A4 Avant cabin design, which means decent amounts of space, classy design and levels of build quality that rival marques are still doing their utmost to match. Providing you're only transporting four adults, there's plenty of head and legroom at the front and at the back. Luggage-wise, the well-shaped 490-litre boot is a decent size and features a useful reversible floor, one side offering a wipe-clean surface for muddy boots and dogs. The rear seats fold down to increase luggage space to 1430-litres but it's a pity that they don't fold completely flat. 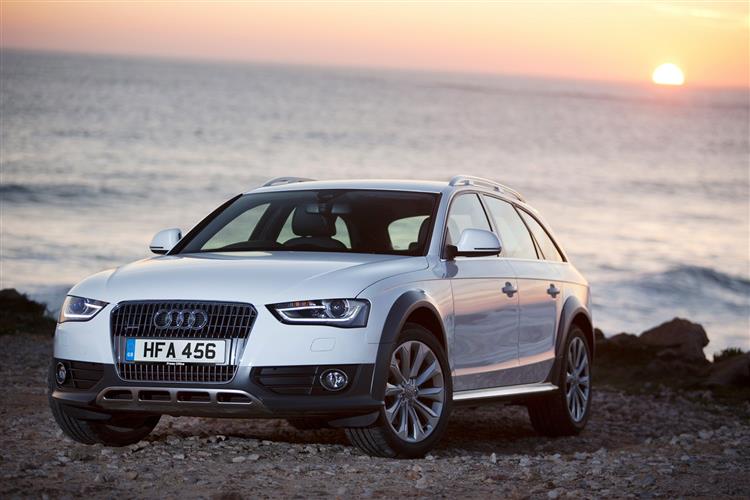