A TOUGHER TRUCK (some text hidden)

Nissan's Navara moved the whole pick-up segment forwards. Developed from car-like rather than commercial underpinnings, it was, from its original launch in 2005, one of the first models of its kind that you really could, with a few compromises, use as single-vehicle transport. Early examples though, exhibited a few mechanical glitches and in the later years of the 21st century's first decade, competitors improved their products substantially. Hence the need in 2010 for the revised version we're looking at here, offered with pokier, more efficient engines, a potent V6 diesel option, a smarter look and an extra dose of hi-tech. If you want a used Navara, it's the version worth stretching to.

Pick-up trucks used to be utilitarian things. Or at least they were until the lifestyle set picked up on them as a fashionable outdoor activity transport. Or the prosperously blue-collar self-employed began using them all-purpose only-cars. Both groups essentially wanted a load carrying car rather than a commercial vehicle - and so the modern pick-up was born. The market's initial stab at this concept simply dressed up its existing products with bullbars, two-tone paintjobs and fancy cabins. Models like Nissan's 2001 first generation Navara, a tinselled-up version of their standard pick-up, were the result. Not good enough. Something essentially built to carry packages was never going to particularly appeal to people. So the company's Japanese engineers worked at it the other way around, starting with a clean sheet of paper and creating a pick-up from the basis of a car, rather than the other way around. The Spanish-built result reached these shores in 2005 when a design first created to be a lifestyle family 4x4 called a Nissan Pathfinder was reborn as the pick-up we now know as the second generation Nissan Navara. It was a great success, for years Europe's favourite pick-up, but a design that by 2010 was facing a whole host of much tougher rivals from every brand in this market. Hence the need for the revised model we're looking at here, a vehicle offering more performance, improved emissions and economy and optional state-of-the-art hi-tech equipment. It sold until the launch of the Navara NP300 model in late 2015.

What You Getword count: 631

With styling based on that of Nissan's massive US-market Titan pick-up, the Navara is no shrinking violet in the styling stakes and the 2010 model year minor visual tweaks did little to change that. A revised front grille, a re-styled bumper and a sleeker bonnet accounted for a length increase of 80mm, taking the overall length of the Double Cab variant to nearly 5.3m. So you're really going to want the optional rear parking sensors. There was a revised bumper design at the rear too, with squared-off edges supposed to offer up a more stable, tougher appearance. That huge size means there's plenty of cabin space, even if you go for the halfway-house King Cab version with its backwards-opening doors and occasional rear seats. This is a bit of a compromise, so with good reason given that there's no two-door version, nearly all Navara buyers go for the Double Cab model. Its wide body and cabin length of over 1.5m means that there's plenty of room for five. And you can enjoy reasonable luxury thanks to things like individual climate controls for both front seat passengers. It's an interior that was smartened up in this post-2010 version with better quality switchgear, revised door trims, nicer seat fabric, revised instrument dials, various chrome highlights and the option of the Nissan Connect Premium Sat Nav/Infotainment system. The interior was more practical in this later version too, with an added storage box on the centre console and door pockets that can now happily hold an A3 map book as well as a one-litre drinks bottle. The rear door storage pockets meanwhile are big enough to hold a standard Nissan First Aid Kit. Other cubbies for clutter include twin gloveboxes in front of the passenger and specialist spaces for coins, cups and cards along with a neat sunglasses holder which folds down from a console in the roof. It also helps that the seats can be folded into various positions to further boost the capacity. On a mid-spec model, you can flip up the seat bases at the back for example to access a hidden storage compartment that would be useful to keep, say valuable tools away from prying eyes. You can also flat-fold the front passenger seat for longish items that won't fit in the pick-up section. How practical will this Navara prove to be in day-today use? Well the pokier engines of this post-2010 version mean it'll be able to cope with a slightly heftier payload than earlier versions could manage - anything from 1130kgs to 1250kgs, depending on the model you choose. But how bulky could your items be? Pull down the lockable tailgate with its big centrally-mounted handle and you'll find out. You can hold it in place horizontally if you need to carry extra-long loads that you don't want to lean against the ladder rack/cargo restraint frame mounted behind the cab. No chance of dropping it down completely though, because the large rear bumper with its incorporated step rather gets in the way. Once you do get stuff in, the loading deck is usefully long, either 1861mm in the King Cab model or 1511mm in the Double Cab variant. The width is 1560mm either way, narrowing to 1130mm between the wheelarches. And there's 457mm of loadspace height. We're not really sure why some original buyers wanted to compromise all of this space by fitting the optional streamlined hardtop X-Back pick-up cover; this limits you to just 1.8m3 of total space. A better option was the intelligently designed C-Channel load lashing system. This consists of five rails, one each side of the cargo floor, plus one on each of the three fixed sides of the load box. Self-locking cleats can be attached to these to provide fixed points for securing ropes. 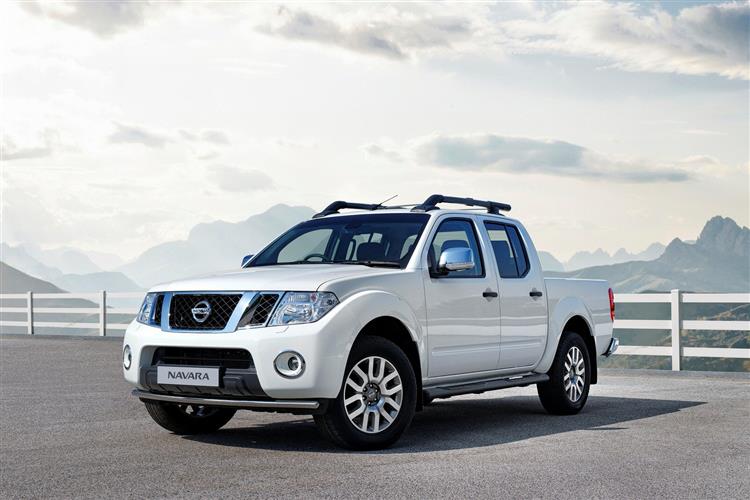