PICK-UP WHERE YOU LEFT OFF (some text hidden)

Mitsubishi's L200 pick-up has long been a favourite amongst British buyers and the smarter and more spacious version that sold between 2010 and 2015 matches its competitors in all key areas.

If you're buying a used pick-up in the UK, then it's highly likely that you'll be seriously considering one of these, Mitsubishi's L200. Its market leadership has much to do with the fact that this Japanese brand got its act together faster than other contenders in this sector, being the first back in the Nineties to recognise that pick-up ownership could be extended beyond farmers and jobbing builders into the SUV lifestyle segment. As a result, this model's predecessor was allowed to take almost half the British market in this sector before its rivals caught up. The modern generation version we're looking at here was first introduced in 2006 and had a much tougher job on its hands with the arrival at about the same time of improved versions of rivals like Toyota's Hilux, Nissan's Navara and Ford's Ranger. Curvier styling set the vehicle apart from competitors but it was mainly repeat business that kept Mitsubishi's market leadership in the face of rivals offering more power and larger load capacities. In order to keep pace, Mitsubishi introduced a revised model for the 2010 model year that offered a smarter look and bit more practicality. It sold until the arrival of the further revised 'Series 5' version in mid-2015 and is the L200 model we're going to look at here as a used market prospect. Is it number one for a reason?

What You Getword count: 472

Before this generation L200 arrived in 2006, you wouldn't have thought it possible to create curvy looks on something as boxy and utilitarian as a pick-up, but Mitsubishi's designers have somehow managed it. In early 2010, the range was lightly re-styled to create the vehicle we're looking at here, with a revised front grille and projector-style headlamps, a look featured across the range, whichever of the various bodystyles you choose. The single cab version is reserved very much for businesses that need a proper old school working pick-up with a traditional two-seat layout and an extensive 2,220mm load length, with the option of Tipper mechanicals or 'Dropside' quick-release side panels for easy loading. Customers of this kind who might occasionally need to transport more than one passenger can also consider the Club Cab version. It offers a 1,805mm load length, with additional capacity behind the cabin's front seats for secure storage or small passengers. Behind the multi-function steering wheel in this revised model, there's clearer instrumentation and a smarter centre console and armrest. For a really plush feel though, you'll need the four-door Double Cab body that almost all buyers tend to want, not least because it's the only bodystyle offered with the more powerful 175bhp engine. Competitors offer Double Cab models of course but the usual upright rear seating and lack of a centre rear 3-point seatbelt might make you think twice about transporting a family of five in them over a long journey. The L200 Double Cab, in contrast, has 3-point belts for all three rear seat passengers and rear seat backs angled at a more car-like 25-degrees. Plus best-in-class rear legroom of 810mm. All of which is great for passengers: not so good for load length in the cargo bay behind - which is why by 2010, Mitsubishi had extended the L200 Double Cab's previously rather modest load length by 180mm, producing a total load length of 1505mm than now can virtually match that of its arch-rival, Nissan's Navara. Access to the cargo bay is by means of a rear tailgate that can be locked horizontally or dropped down almost completely if you unhook the folding support arms on each side. As with most pick-ups, you've to lift your load quite high (850mm) to get it in to the loadbay, which might require a forklift if you're using all of the total 1050kg payload capacity. Once there however, plenty of tie-down hooks are provided to keep things from sliding about and there's 1085mm of width between the wheelarches, easily enough for a standard EU pallet. One little touch we really liked on L200 models of this era was the option of being able to lower the heated back window electrically, enabling items that are a bit too long for the cargo bed to be poked through into the cab. 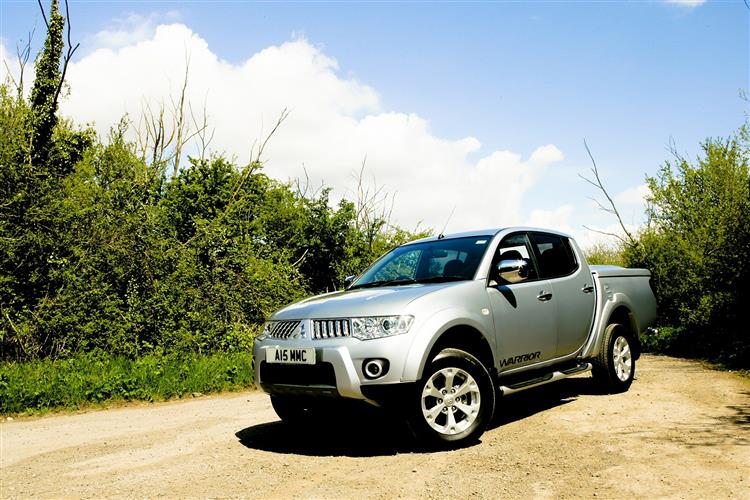