THE CHOSEN SUN (some text hidden)

Sometimes, simple is good. A recent survey found that most buyers, when presented with different samples of product packaging, gravitated towards the simplest and cleanest branding. Clearly this can only work when the brand is so well known that it doesn't need to explicitly communicate the benefits of its product on the packet, bottle, box or whatever but it's refreshing proof that less can be more. Volkswagen has clearly been thinking along similar lines with the design direction of its most recent wares and the facelifted 2011-onwards version of its Eos convertible model demonstrated this philosophy as clearly as any of the company's cars. Here's what to look for when buying a used example of one of these cleanly-styled folding metal drop-tops.

First introduced in 2006, the Eos sold well in the UK thanks to a slick five-piece folding hard top with smoked glass roof section: and a reliance on the British love for Volkswagen build quality. The 2011 facelifted design offered more of the same, with an even more sleek and pared-back look, plus extra equipment and greater efficiency. This improved Eos rolled into UK dealers in February 2011, with a choice of either 122 or 160PS 1.4-litre petrol engines, a 210PS 2.0-litre unit as seen in the Golf GTI and a 2.0-litre diesel good for 140PS. The trim levels on offer were SE, Sport and Exclusive. Volkswagen clearly thought it had done a pretty good job on the Eos, because it then did very little to the car until it reached the end of its life in 2015. It got a DAB stereo in 2014, but that was about it. The car that really sounded the death knell for the Eos was the Golf Cabriolet, launched at the end of 2011. The soft top Golf was cheaper and handled better than the Eos.

As for the roof itself, the mechanism is unchanged over the original version of this car, save for the option buyers of the facelifted version get of operating it remotely, useful if you're over the road from your parked Eos sipping a cappuccino and the heavens suddenly open. Most of the time though, you'll be dealing with the folding top via the controls located within the front centre armrest. The centre black switch operates the sunroof element of the roof, ideal for those times when you simply want sun without wind. But should the weather brighten sufficiently for you to retract the entire roof mechanism, then the surrounding chromed switch will take care of the complete process for you in an acrobatic fashion that still makes passers-by stand and stare. Mind you, they'd better not be standing too close to the boot when the whole thing starts. The back of the car initially falls rearwards and would clonk into the vehicle behind if you were tightly parked had not Volkswagen decreed that all Eos models should have rear parking sensors to disable the roof mechanism in such a situation. Assuming that you are in a position to use it - and to be fair, it doesn't need an enormous amount of space (the German designers reckon you can operate the top inside most domestic garages) - the folding roof mechanism is worked by an electro-hydraulic pump with no fewer than eight hydraulic cylinders and sandwiches itself into five separate pieces in just 25 seconds. Of course, once the convertible panels have folded themselves into the boot, they'll also have munched through a large part of the available baggage space on offer, roof-down luggage capacity falling to just 205-litres. That's a little less than you'd find in a family hatchback-based convertible like Renault's Megane Coupe-Cabriolet or Peugeot's 308CC - but that's because Volkswagen doesn't really want buyers comparing this Eos to those kinds of cars. That's why the designers have robbed a little of the boot space in pursuit of a rear seating area that can comfortably accommodate two adults as long as the journey isn't too long. To rival that, you'll need a much pricier executive sector cabriolet based on something like an Audi A5, a BMW 3 Series or a Saab 9-3. 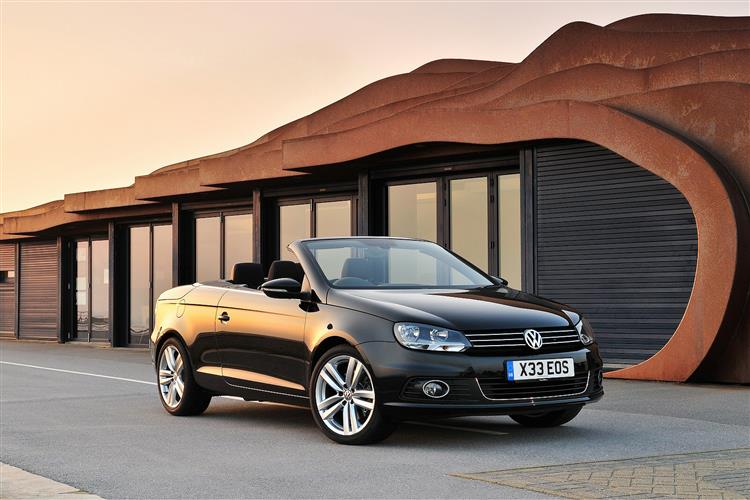