Think pick up and you'll probably reckon on a Toyota Hilux, or a Mitsubishi L200, possibly even a Nissan Navara, a Volkswagen Amarok or a Ford Ranger. If you're in the market for this sort of vehicle on he used market though, there's another name that would be wholly remiss to leave from your shortlist; the Isuzu D-Max. A more refined successor to the bulletproof Rodeo, the D-Max has carved itself a niche in this most hotly-contested sector. Throughout its production life, it was a vehicle that proved to be especially popular in its upper-spec doubecab guises. It was to capitalise on this demand that in 2014, the UK importers introduced the limited-run 'Blade' variant we're going to look at here. Will it make a good used option for lifestyle pick-up buyers? Read on.

Isuzu used the 'D-Max' name in other markets to designate the Rodeo model that represented it in the UK pick-up segment between 2002 and 2012. When that period ended and the brand was ready to launch an all-new design, the 'D-Max' tag was adopted and the vehicle was successfully introduced into the UK market. Early sales were strong enough to encourage the British importers to test the market with a very high-spec doublecab variant which they christened the 'Blade' and announced early in 2014. It got eighteen-inch alloys, a roller top cover or a full topper, side steps, tinted windows, heated leather seats, a DAB stereo and a touch screen nav system. This variant was subtly upgraded in the middle of 205, but it's the early version we look at here.

What You Getword count: 221

The D-Max Blade certainly looks the part, offering those who want a leisure-oriented pick up something that's has some genuine visual impact. Those eighteen-inch six-spoke alloy wheels help here, and they're shod with some meaty-looking 255/60-18 Pirelli Scorpion Zero tyres. The front grille is finished in a shadow grey tone to match the wheels, while the door handles and roof bars are painted black. Even the heavy-duty side steps haven't gone too big in chrome. Two paint finishes were offered. The Splash White looks clean but the Blade definitely looks meanest in mica Cosmic black. The interior of this double cab looks and feels sturdy, but it's far from basic. There's been some clear attempts at styling, with a circle of minor controls on the centre stack reminiscent of the Mazda RX-8 and a couple of ventilation 'ears' at the top of the fascia that aren't a million miles away from contemporary Ford design. So while it's not scoring top marks for originality, the D-Max fascia gets credit for ease of use, with wheel-mounted controls, big clear clocks, easy access to the most important switches and a good driving position. There's even a decent amount of rear seat legroom, which isn't always the case with double cabs. You also get a 3.5-tonne (braked) towing capacity and a payload capacity of 1,000kg. 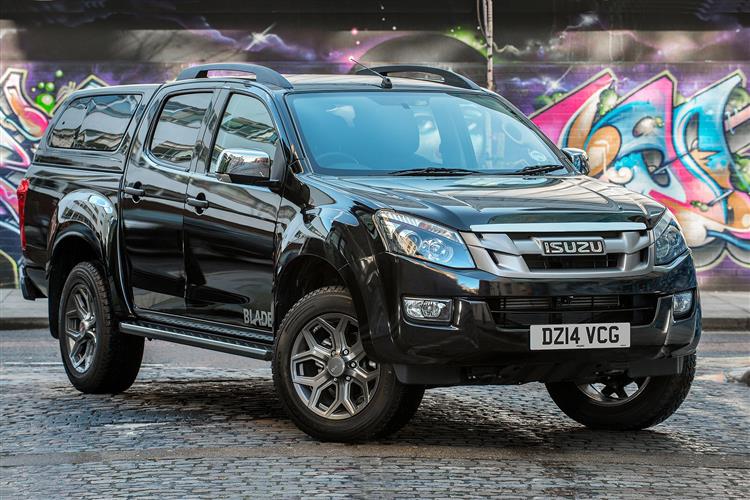