The Mercedes Vito is a spacious medium-sized van that knows its business, offering quality and distinctive rear wheel drive engineering to LCV buyers looking for a durable long-term solution to their transport needs. Here, we're looking at the second generation version - and specifically at the facelifted model that arrived in 2010, bringing with it a more efficient range of more powerful Euro V-compliant engines, a fresh face, a smarter cabin, revised chassis settings and increased payload capacity. As a result, Stuttgart's medium-sized panel van contender was better equipped than ever to take the fight to an increasingly impressive array of Volkswagen Transporter and Vauxhall Vivaro-sized rivals. How will it fare as a used buy? Let's find out.

One of the things you learn early on in business is that the cheapest options aren't always the best ones. And that the way you deliver your goods says plenty about them. Both things explain the appeal of the Mercedes-Benz of medium range vans, this model, the Vito, which slots in just below the larger Sprinter model in the German brand's LCV range. It was first launched in 1996, but the version you're most likely to see is the second generation version that dates from 2003. This also formed the basis for Mercedes' Viano luxury MPV. In 2010, this vehicle was substantially updated into the form we're looking at here, with changes that made it smarter, more practical, better to drive and crucially, less costly to run. There were restyled front and rear lights, restyled front bumpers, and more significantly, more efficient diesel engines adapted from the Sprinter range. As well as the standard diesel and petrol engines, the Vito was also offered in E-CELL electric guise, the first factory-made battery-electric van to be introduced into the LCV market. The model updates and design innovation were needed in the face of tough rivals as diverse as the Vauxhall Vivaro / Renault Trafic design, the Peugeot Expert / Fiat Scudo / Citroen Dispatch collaboration, the Volkswagen Transporter and of course the ubiquitous Ford Transit. All these alternatives were also made in people carrying form - as was this Vito. We've already mentioned that this basic design sired the Viano MPV but the Stuttgart brand also offered customers a Vito people carrier called the Traveliner - essentially a stripped-out Viano. There was also a Dualiner model - a panel van with second row seating. The brand went further too, also developing a purpose-designed taxi version which debuted in March 2012 and sold strongly.

What You Getword count: 457

The face of this improved second generation Vito has a chunkier, more robust look that takes its cues from the contemporary Mercedes passenger car line up. The simpler, two slat grille, for instance, is flanked by restyled headlights that feature a larger reflectors to increase light output, plus have integrated daytime running lights and fog lamps. If a lot of night driving is on the agenda, try and find a version fitted with the optional Bi-xenon headlamps. These featured a cornering function and came with LED daytime running lights and a washer system - both welcome on a murky winter's day. This facelifted model's redesigned bumper came with a hard-wearing grained finish but if you want a smarter-looking Vito, find one in which the bumpers have been optioned up to body colour. More importantly with this van, Mercedes pulled off the neat trick of shrinking the size of the door mirrors (so drivers didn't have to fold them so often going through narrow spaces) yet somehow at the same time, widening the mirrors' field of vision. The Vito's wide door opening and well placed step mean that getting in is a simple enough manoeuvre and once seated aloft, you'll find a cab with three-abreast seating that's close to Mercedes-Benz passenger car standards of finish thanks to high quality fabrics (or optional artificial leather) and an anthracite-based colour scheme for the interior. It helps that the smart steering wheel isn't set at such a bus-like angle as you'll find in some competitors, with further car-like cues found in the way that most of the controls are located on a neatly presented centre console with the neatly shaped gearstick protruding from the dash below. The thoughtful, uncomplicated layout looks great, feels great and is a pleasure to use. Particularly so in this facelifted MK2 model in fact, since here, wider functioning push buttons replaced the previous rocker switches on the upper section of the centre console. All very smart, but when it comes to the smaller everyday bits and pieces that'll tend to clutter up your cab - map books, McDonalds wrappers and thermos flasks - we have to say that this cabin isn't exactly overflowing with stowage capacity. No passenger seats folding to reveal work tables, no clipboard holders popping up into your line of sight - not even cupholders convenient to the driver's reach. This is one area where the Vito's rivals get the better of it. Still, you do get a large storage compartment on the centre top of the dash which will accommodate most of your day-to-day paperwork. And, of course, it all feels extremely solid, durable and well screwed together. Squeaks and rattles? Even on higher-mileage models, we'd be surprised if you find many. 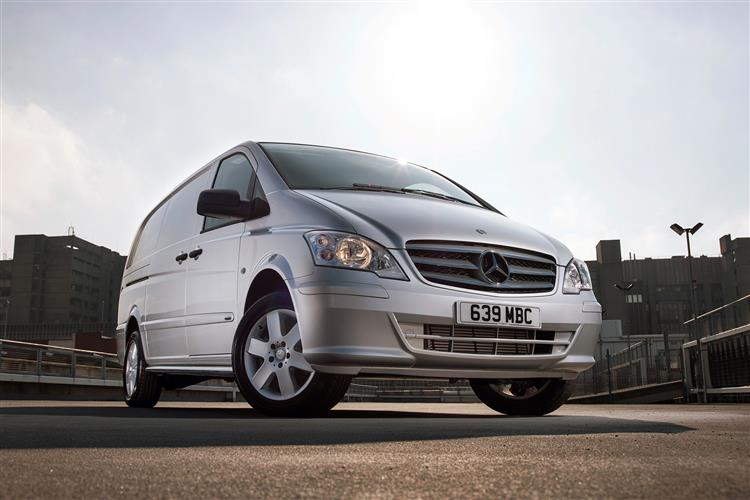