SETTLING INTO A CRUZE (some text hidden)

The Cruze was launched at a time when Chevrolet was struggling to rid itself of previous associations with the Daewoo budget brand. This Focus-sized model was initially launched in 2008 as a saloon, but estate and hatchback variants subsequently followed. All used well-proven parts from its cousin (and competitor), the Vauxhall Astra. Following Chevrolet's decision to leave the UK market, now could be a very good time to look at an affordably-priced used example.

The background story to his Cruze model certainly sounds promising. This, after all, was the first Chevrolet to be tested and tuned in Europe for European tastes, prior to launch having covered over 1.2 million km of durability testing. The design was based on the hi-tech GM platform developed for the sixth generation Vauxhall Astra. And was styled by the man who helped create the cheeky little Italian fashion icon that we know as the Fiat 500. As a result, it's everything you don't expect from a Korean-built car: visually striking, dynamically adept and possessed of a quality feel. The model was launched in saloon guise in 2009 but Chevrolet quickly discovered that British buyers didn't think much of compact saloons. Hence the subsequent introduction of estate and five-door hatchback bodystyles. Buyers got a choice of 1.4, 1.6 and 1.8-litre petrol engines, plus 1.7 and 2.0-litre diesels. Sales continued slowly until Chevrolet's decision to leave the UK market at the end of 2015 brought a halt to things.

Before the launch of this car, lots of Chevrolet's UK offerings had been rather forgettable from a design perspective. The Cruze changed that. It's a handsome compact saloon with an athletic stance and sharp, sculpted lines. The headlights curl around the corners and smear back to a point along the bonnet line, while the roof drops away towards the rear, meeting with the stubby boot if you're looking at the saloon version. The car is around 4.6-metres long and about 1.8-metres wide, putting it in the same size bracket as booted versions of the Mazda3 and the likes of Volkswagen's Jetta. Interior quality is a sticky issue for any budget car, as materials quality and eye-catching design are usually amongst the first things to be sacrificed to achieve an eye-catching price. The Cruze defies expectations on this score however, because it's actually quite slick when you clamber inside. Some of the switchgear (the steering wheel, stalks and the headlamps switch) will be familiar to owners of the Vauxhall Insignia (which is good news) and the dashboard design is smart - the stereo controls being a particular high point. Unlike other models in the brand's line-up, there are no hard, scratchy plastics to be found. Chevrolet also built in a wide range of adjustment for the driver's seat and steering wheel which should help most people get comfy. In the rear, headroom might be a bit limited for the very tall but overall, there's a lot more space than you would expect from this class of car - plenty of room for four adults to travel comfortably, though the narrowness of the cabin and the chunky transmission tunnel means that five would be a squeeze. Storage space around the interior is good too: there are adjustable cup-holders between the front seats and bottle holders on the doors. As for luggage space, well this saloon model offers a 450-litre boot: better than you'd get on a rival car like, say, a Mazda3 4-door and enough to swallow, for example, two sets of golf clubs lying sideways, with enough space for two compact golf trolleys in front of them. If you need more space, the rear seat back split-folds down 60:40. 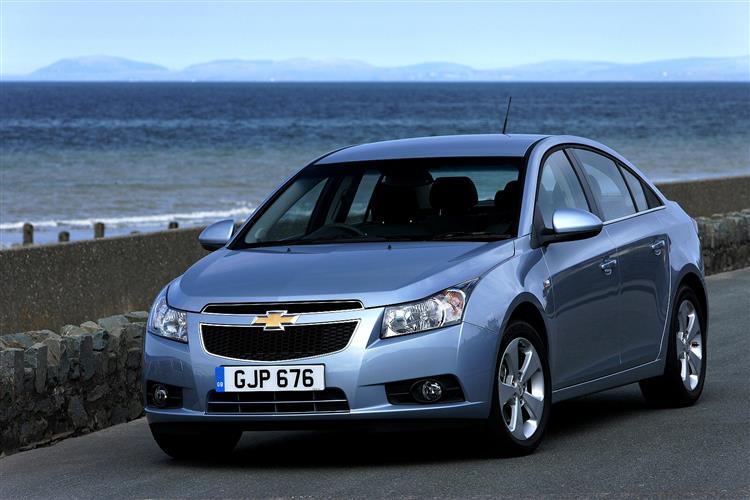