Land Rover's original MK1 model Freelander was a great case study in perseverance. The first cars were well styled but never that well built or even that great to drive. Fortunately the company acted quickly and developed the Freelander nameplate, giving it constant updates and infusions of cash. The second generation Freelander 2 was a whole lot better but it had a tough time keeping on top of a rapidly developing market. With a whole lot of new and very good market entrants, the baby Land Rover really had to look sharp. It was first launched way back in 2006 and six years later, remained on sale with a replacement still three years away. Land Rover needed to give this car a last lease of life - and did so. Does buying one of these 'last-of-the-line' 2012-2015 Freelander2 models on the used market makes sense? Or is this one best left alone?

This second generation Freelander was launched in 2006 to take on a host of mainly Japanese rivals. It did, establishing itself near the top of the compact SUV sector, unchallenged off road and a force to be reckoned with on-tarmac too, especially after an efficient stop-start system was introduced in 2009. Even so, by 2010, cheaper versions of this car were losing sales to pretend offroaders from the Qashqai 'crossover' class, while top models were being threatened by ever plusher and pricier compact SUVs from BMW, Volvo and Audi. Land Rover responded with a styling update, a 2WD option and a pokier 190PS SD flagship version of the familiar 2.0-litre diesel engine, which by now was the only unit on offer. It wasn't quite enough. The Freelander still lacked the showroom polish of some of its German prestige rivals: that 'Range Rover for the real world feel' that the brochures promised. So Solihull tried again and in early 2013, the more premium-feeling versions we're going to look at here were launched, with minor styling tweaks, some key hi-tech options and much smarter cabins. In truth, it was a bit of sticking plaster development, aimed to staunch the loss of sales until the car's replacement arrived in 2015. That car would no longer bear the Freelander badge, instead being dubbed the Discovery Sport.

What You Getword count: 616

Not too many changes were made to the looks of this post-2012 Freelander. But then, not too many were needed, for the car had already received a fairly far-reaching facelift early in 2011 that had given it a sleeker front end with revised grille and headlamps, plus bigger door mirrors. Despite that, the designers still managed to make further tweaks to this 'last-of-the-line' version, re-styling the headlamps yet again and equipping them with the latest in Xenon LED technology. There was also a fresh signature graphic for the front running lights, while the grille and foglight bezels got a bright finish. There were also paint detailing changes to the front grille surround, plus insert bars and a fender vent to harmonise the different elements. Smarter alloy wheel designs and a range of eye-catching paint colours rounded off the improvements. It's inside though, that the updates made to this car were most apparent. Previous Freelander 2 models had been a little 'Fisher Price' inside. The big, chunky rubberised knobs and dials of earlier models were very durable and easy to use but that didn't give the cabin the kind of up-market sheen potential buyers got in BMW or Audi SUV rivals, the cars Land Rover wanted to target. Hence the improvements made here in the creation of the kind of interior that, to be frank, this car should always have had. There was a brand new centre console that was much more in keeping with the 'mini-Range Rover' theme that Solihull was so keen to create. It was dominated by the same kind of 7-inch colour touchscreen that had been used in the brand's larger models for the operation of audio, 'phone and navigation systems that could also work with so-called 'Say What You See' voice activation. As an infotainment set-up, it wasn't the most immediately intuitive on the market, but it was a big improvement over what had gone before. It also functioned as the display screen for the optional rear view camera, another premium addition on top models, with dynamic lines representing the boundaries of the vehicle and the driver's predicted path when reversing. The system also incorporated 'Hitch Assist', a graphic superimposed on the camera showing the position of the tow ball. At the base of the centre console below the gearstick, early Freelander2 model owners used to find a rotary control for the clever Terrain Response system, but with this late version, this dial was replaced by the kind of much smarter row of switches that Land Rover was using in its larger Discovery or a Range Rover Sport models. Below these, Freelander regulars might notice that with this later version. there's a lot more storage space - notably a cupholder and a shuttered compartment between the seats, housing another cupholder plus USB and Aux-in points - a perfect secure place to store and charge up your 'phone and other electronic devices. Room for this was freed up because the previous conventional handbrake had been replaced by a space-saving electronic one. There were other changes too for this last-of-the-line version - a keyless push-button start system for example: no keys any more. And enhancements were also evident through the four-spoke leather-trimmed steering wheel. Though the basics of the so-called 'Command Driving Position' remained unaltered, with great visibility out of all four corners of the vehicle aided by narrow front A-pillars, the dials in the crisp, restyled instrument cluster were far more the kind of thing potential buyers now expected to see in a premium small SUV. The main gauges were separated by a 5-inch screen showing primary vehicle-related information such as temperature and fuel levels, gear positions and the chosen Terrain Response setting. 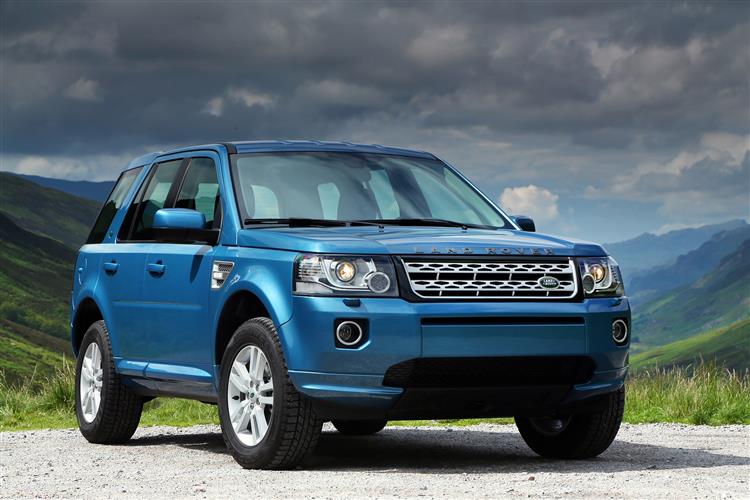