Although a litre might seem quite a lot when you spill that much Coke in your lap at the cinema, when it comes to the cubic capacity of a car's engine, it's pretty small beer. Received wisdom stated that you could run a tiny citycar with one-litre of swept capacity in your cylinders but anything much bigger than that and it would have less pulling power than John Prescott in an Ibiza nightclub. Fiat's 899cc TwinAir engine was the first to hint that there was more to a sub-litre petrol engine than met the eye, but it was Ford who really picked up the ball and ran with it, with its 1.0-litre EcoBoost powerplant. It's been fitted to a wide range of Ford models and now one in every five petrol-powered Fords sold across Europe has the 1.0-litre engine installed under its bonnet. Here we take a look at how this engine shapes up when fitted to the Focus, sold between 2012 and 2014.

This third generation Focus, was launched back in March of 2011 but it wasn't until 2012 that Ford started offering the 1.0-litre EcoBoost engine, It was sold in two power outputs, 100 and 125PS, and was offered with a wide selection of trim levels. At the end of 2013, Ford announced Ford has announced an ultra-efficient version of the Focus 1.0-litre EcoBoost that was the first petrol-powered family car in Europe to offer 99 g/km CO2 emissions. Due to a specially calibrated version of the 100PS engine, the Focus 1.0-litre EcoBoost returned 67.5mpg, aided by ultra-low rolling resistance tyres, unique aerodynamics under the car and revised gearing to help deliver the company's most fuel-efficient ever petrol-powered family car. The fourth generation Focus was announced in summer 2014, debuting in early 2015.

All Focus models get a front end that looks a good deal more aggressive than its rather low-key predecessor, with gaping triangular front air intakes that look as if they should grace an RS model. Closer inspection reveals them to be mere plastic blanking plates but between them is what Ford dubs its dynamic shutter grille which can close at speed to improve aerodynamics. The rear lights are an intricate design that integrate with the fuel filler cap on the right side of the car. These also contrast with the less extrovert rear window treatment. The estate version is extremely well proportioned, with a mini-Mondeo silhouette. The interior is a massive step forward in terms of materials quality and fit and finish from its already solid predecessor. Some commentators have claimed that the Focus has targeted the Volkswagen Golf, but the interior is a far more extrovert design than you'll find in any Wolfsburg vehicle. The centre console looks busy but it's fairly easy to figure everything out quickly and the Sony stereo is a very classy touch. The estate is well worth hunting down. The load bay measures 476 litres to the parcel shelf and if you drop the rear seats you get up to 1502 litres of available space. Unlike in the hatchback version, there's no full-size spare wheel option available, Ford offering only a slim space saver spare for estate buyers. 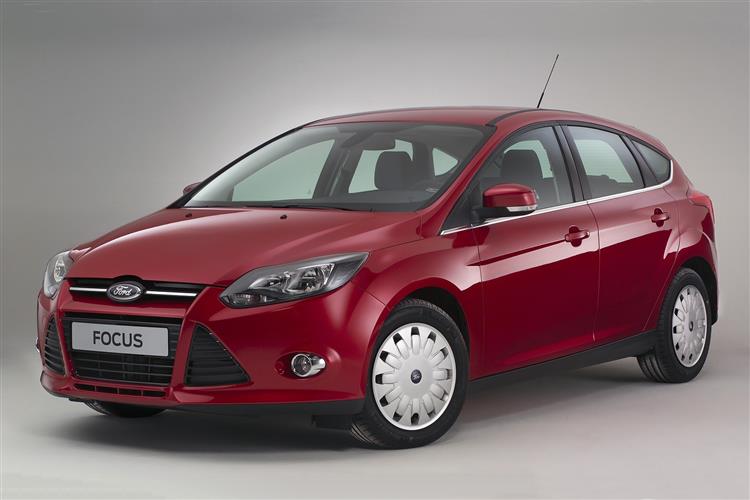