There's something wholly depressing about realising that marketers have your number. We like to think of ourselves as free spirits, people who are unlikely to be easily pigeonholed when it comes to products, but sometimes a car comes along where you realise that the designers were explicitly targeting people like you. They know where you shop. They understand how you like to spend your spare time. They'll have a pretty good fix on what you do for a living and what other brands you'll be attracted to. They're not always 100 per cent successful though. Volkswagen's Passat is a car that needs little in the way of introduction. From lowly beginnings in 1973, the car has evolved at a seemingly glacial pace, never really getting too many ideas above its station, until it arrived at the point where it resides today. In 2010 Volkswagen introduced the 'B7' seventh generation version of the Passat and that was followed in fairly short order by the car we look at here, the all-wheel drive Alltrack version. Here's what to look out for when buying used.

The B7 Passat was, in many respects, something of a knee-jerk reaction from Volkswagen. The European automotive market had been plunged into turmoil by the credit crunch of 2008 and it was cars like the Passat that were really feeling the squeeze. The sixth generation car only appeared in 2005, but sales were crashing, so Volkswagen took remedial action, facelifting a reformatting the car with an added focus on efficiency. It worked and sales soon started to recover. In March 2012, Volkswagen introduced a version of this seventh generation design that marked the turning point. The nation had emerged from the worst of the recession and buyers were starting to look forward to spending a little more of their discretionary income. The rugged Passat Alltrack estate offered a welcome relief from a world of eco stop and start and low rolling resistance tyres. Yes, the Alltrack was powered by a pair of efficient diesel engines, but this was a vehicle that was full of feelgood factor. It lasted in the Volkswagen line-up until 2012 and it never really took off. Perhaps buyers in this corner of the market were prepared to hold out for an Audi, perhaps it was just under-marketed. It was replaced at the end of 2014 by the new Passat range, the B8 MK8 generation.

The Alltrack is based on the familiar Passat Estate but includes a number of modifications, not least of which is that 4MOTION four-wheel drive system. The raised ride height lifts ground clearance from 135 to 165mm, which offers better clearance off road. The body enhancements also provide a modicum of protection from scrapes when covering rough terrain. These include stainless steel-look front and rear underbody protection panels and flared side sills. Other features include matt chrome roof rails, window surrounds, plus a smarter grille and exterior mirror casings. At 4,771mm, the Passat Alltrack is exactly the same length as the Passat Estate and despite flared wheel arch protection, the vehicle's width also remains the same at 1,820mm. The raised ride height also improves the car's breakover angle - the acuteness of a hill crest it can negotiate without grounding out - from 9.5 to 12.8 degrees. Ruggedly styled front and rear bumpers increase the approach angle from 13.5 to 16 degrees and the departure angle from 11.9 to 13.6 degrees, giving a welcome measure of ability to the marketing spin. With a great diesel engine and clever all-wheel drive underpinnings, the Passat Alltrack seems to offer a lot of car for your money. It's well equipped too, the single trim level including Alcantara upholstery, 2Zone electronic climate control, a touchscreen satellite navigation system, DAB radio, MDI iPod connectivity, Bluetooth telephone preparation, cruise control, front and rear parking sensors, a tyre pressure monitoring system and 18-inch Canyon alloy wheels. It doesn't stop there. A Driver Alert System that monitors the driver's responses to raise awareness of fatigue is also standard, as is ESP (Electronic Stabilisation Programme). What To Look For (used_look) 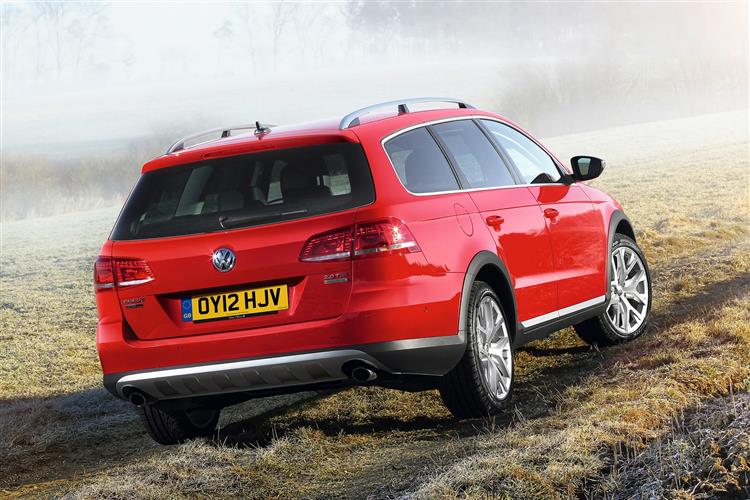