The Volvo V70 needs little in the way of introduction. It's the classic big Volvo estate and it's almost joined the ranks of vehicles for which no explanation is ever needed to justify your buying decision. If you need a big Volvo estate, just ask yourself what else are you going to buy. For sure, there are definitely occasions when choosing an Audi or a Mercedes load-lugger just isn't going to cut it. Here's what to look for when choosing one of the updated third-generation V70 models built between 2010 and 2013.

Volvo of course has a long and illustrious heritage in producing spacious estate cars, one which stretches all the way back to 1953 and the Duett PV445 wagon. That was replaced with the classic Amazon model in 1962 which in turn gave way to the 145 series in 1967, but the big Volvo estate that many remember is the big-bumpered 245/265 series of 1974, the car that upwardly mobile Margo and Jerry Ledbetter drove in the BBC sitcom 'The Good Life'. Every middle class Surbiton couple had to have one. So did every antiques dealer. In 1985, we got the ugly US-inspired 740/760 models, restyled in 1990 and sold as the 940/960 series. Only with the introduction of front wheel drive in the 850 estate of 1993 however, did things really take a step forward, a car re-launched as the V70 in 1996. The first proper purpose-designed V70 followed in 2000, replaced in 2007 by the third generation version. That MK3 model was heavily updated in 2010 with a package of changes that carried the V70 through to the post-2014 period where Volvo was able to start plumbing in some of its own engines rather than using Ford-derived units. It's the 2010 to 2013 period V70 models we're going to look at here.

Whichever V70 variant you choose - D3 or D5 diesel, T4, T5 or T6 petrol - you should find this car to be reasonably equipped. Alloy wheels, roof rails, four electric windows, an 8-speaker MP3-compatible CD stereo, dual-zone climate control, cruise control and rain-sensing wipers are standard across the range. When buying new, many parents specified the option twin child booster seats that fold out from the rear seat cushions. Another feature the brand is especially proud of is its 'Sensus' infotainment system. Here, a 5 or 7-inch colour screen in the upper centre part of the dash controls everything from sat nav to central locking, reversing camera to digital TV and telephone functions - plus much more. Where fitted, it also looks after the display of all this car's safety functions - and as you might expect from a Volvo, there are many. First the basics: you get Volvo's WHIPS whiplash protection system, the usual quota of airbags, isofix rear childseat mountings and the normal electronic assistance for traction, braking and stability control. Then there's Volvo's City Safety system that uses a laser built into the windscreen to monitor vehicles or objects ahead of you. What many buyers will really want to know about this car is its luggage-lugging potential. It's not the biggest station wagon in its class in this respect - you can pay less for a Skoda Superb Estate or more for a Mercedes E-Class Estate and either way get more loadspace - but what's important is that there's quite as much room as any normal family, equestrian rider or antique dealer will ever need. This optionally powered tailgate takes the upper part of the tail lamps with it as it rises to make the opening even more generous, revealing a 575-litre boot, 60-litres bigger than in the previous generation model. That doesn't mean much, so let us put that in practical terms: there's room enough here for a washing machine with all its packaging or, according to Volvo, five large suitcases plus an extra medium one and two rucksacks. And there's an extra concealed tray beneath the boot floor that locks when the tailgate shuts. If that really isn't enough, then the space on offer expands to 1600-litres if you fold the rear seats flat and stack your cargo to the roof lining. 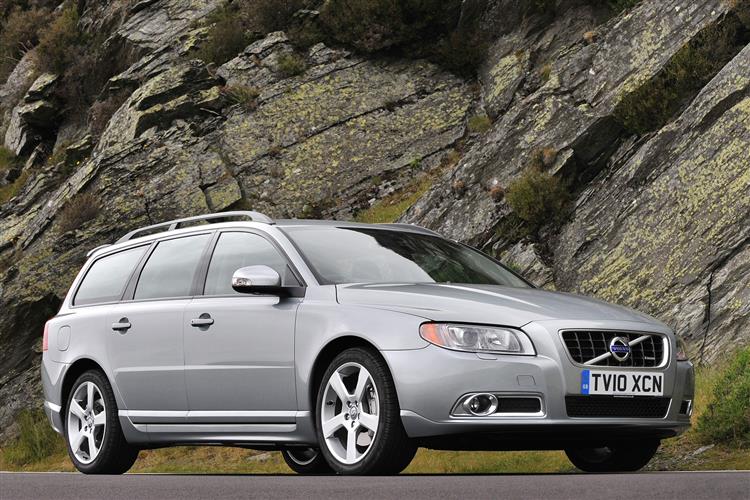