There's a saying that with engines, there's no substitute for cubes and when size counts for everything, the same goes for vans. Sometimes bigger is just better, which is where Peugeot's Boxer has capitalised. This big 'un is also available with both Citroen and Fiat badges but either way, it's had to take on tough and very impressive rivals: the Ford Transit, the VW Crafter/Mercedes Sprinter package and the more recent Renault Master/Vauxhall Movano design. It's not yet a household name in the way that some of these panel vans are, but does that make picking up a used example even more of a smart move?

The Peugeot Boxer has more of a track record than many realise. Its predecessor certainly made the numbers in Europe, with over half a million examples rolling out of the Val di Sangro factory in Italy between 1994 and 2006. This one then, launched here in 2007, has some big tyre tracks to fill. To succeed, its 'Boxer' name needed to be appropriate. In tough day-to-day business use, you need to be strong enough to take the knocks with the stamina to go the distance and a tonne of heart. Mind you, muscle and size will only get you so far in the big van segment. To become a real contender in the heavyweight division, a huge LCV needs craft, a touch of style and the ability to always make the weight. This one was launched alongside its Fiat Ducato and Citroen relay siblings in 2006 and although some minor trim changes were made during its eight-year life, the Boxer's biggest development came in August 2010 when the three year warranty on new models was extended from 60,000 to 100,000 miles. A heavily facelifted model replaced this one in 2014.

The cabin says a lot about the way that interior panel van design has progressed in recent years. Build quality isn't quite as solid as some pricier rivals but it all feels built to last, with plenty of thought given to day-to-day usability. There's the dash-mounted gearlever for example, that offers more space for a centre third passenger and enables the driver to more easily slide across the front and exit on the passenger side. Then you've the multitude of storage options. These include a glovebox, a lockable lidded bin in the middle of the fascia spacious enough to swallow a laptop, two shelves on the passenger side of the dashboard (one above the other), plus further shelving both beneath and to the right of the steering wheel. You can even stash stuff on a shelf above your head and in a tray beneath the passenger seat, plus of course there are deep two-tiered bins in both doors big enough to hold a 1-litre flask or a big bottle of water. Just as useful is the way the middle seat folds down to reveal a little desk with a clip and two cup holders. Not everything fits nicely into shelves or trays of course, so there's a neat dash-top clipboard that flips up to hold delivery notes or maps - though rather annoyingly, it won't pop up into your eyeline if you've a passenger airbag fitted. As you'd expect, there's a wide range of body sizes available - four lengths, three wheelbases and three roof heights if you're counting - and these allow a range of load volumes that extend from 8 m3 up to a truly sizable 17 m3. The Boxer can manage some seriously hefty cargos as well, with gross vehicle weights extending from 3.0 to 3.3 and up to 3.5-tonnes. Gross payload varies between 1100 and 1575kgs, which isn't quite as high as is offered by some rivals. Still, none can improve upon the wide range of bodystyles on offer which include window van models (minibuses to you and I), single or double cab options and combi minibuses as well as the usual factory-built conversions that create chassis cab, crewcab, tipper, dropside and Luton derivatives. 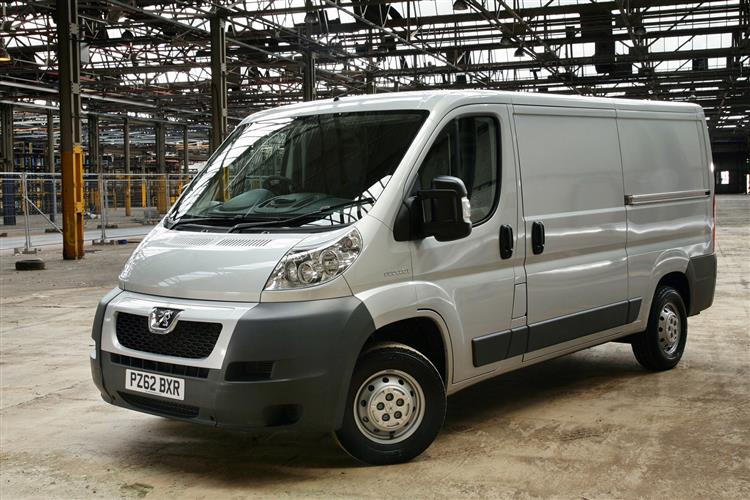