PLUS POINTERS (some text hidden)

Volkswagen is a company well known for exploiting all manner of market niches but it found itself looking on from the sidelines as the market for small MPVs boomed. Developing a new platform would have been costly so its answer was to modify the existing Golf chassis to form the slightly more spacious Golf Plus. As a new proposition back in 2004, it met with a tepid reaction but the revised first generation version that sold between 2009 and 2013 is a slightly better bet, especially as a used buy. Read on to find out why.

Volkswagen first introduced the Golf Plus way back in 2004, billing it as the perfect solution for those wanting a Golf with a bit more space, but who didn't want to upgrade to the Touran MPV. The market appeared rather puzzled by the proposition. The car ran on the same wheelbase as the regular Golf hatch, so didn't offer any more rear legroom. Yes, there was more headroom in the back, but unless you were regularly carrying six-footers there, the standard car seemed to be just fine. Sales reflected this rather fuzzy market positioning and the Golf Plus never really gained the traction of other five-seat MPVs like the Ford C-MAX. Volkswagen tried again in 2009, with the launch of a revised Golf Plus. This featured the cleaner front end of the Golf MK6, but with much the same underpinnings as before. It was offered with a choice of four engines: two petrol and two diesel. These comprised the 1.4-litre 80 PS and 1.4-litre TSI 122 PS, as well as 2.0-litre common rail TDI units with 110 and 140 PS. Both manual and DSG auto gearboxes were also available. This version of the Plus spawned an economy BlueMotion special later in 2009 and the 1.6 TDI diesel was also introduced. The market though, remained lukewarm to this car and the announcement of the seventh-generation Golf in 2012 further dented Golf Plus sales, leading to its quiet withdrawal from sale at the end of 2013. Its replacement, the Golf SV, was announced in spring 2014.

What You Getword count: 397

When this first generation Golf Plus was facelifted in 2009, its differences in comparison with a standard MK6 Golf hatchback became clearer. The neatly integrated roof rails are the most obvious point of differentiation and at the rear, there's a colour coded bumper and attractive red light clusters that utilise LED technology. But all this is detail stuff. The main difference between the two cars is that the Golf Plus sits 113mm higher, offering 20mm more interior headroom that enables you to sit much higher than in a standard Golf. Considering statistics which show that we're close behind the Dutch as the second tallest nation on earth, that ought to be quite useful for UK families. That higher roofline makes life a bit easier when you're trying to strap in children too. The more shapely upright seating means that there's more generous legroom front and rear, even before passengers start playing with sliding rear seats, with each section able to slide backwards or forwards by up to 160mm to prioritise either luggage space or rear legroom. You can't remove them MPV-style but they do recline to waft the kids off to sleep on long journeys, and of course, they 60/40 split-fold in the usual way, creating a virtually level 1450-litre loadspace, enhanced by a clever double-height boot floor. The middle seat can be folded to form a picnic table if you don't want to use the fold-out trays provided in the front seat backs. And there's plenty of cabin storage too, with over 43 separate receptacles dotted around the interior. Volkswagen had to redesign every one of the Golf's body panels in order to accommodate this car's extra height and as a result, the Plus' waistline is higher and the base of the windscreen further forwards. Just like an MPV in fact. Or is it? After all, despite the changes, this car is virtually no longer and actually not quite as wide as a standard Golf. Which means that the slight 45-litre increase in standard luggage space (to 395 litres) that comes as a result of the Plus' modifications is mainly to be found nestling against the ceiling. My colleagues point out that this is in the position which is least often used. I would counter that it might be very useful when it comes to bulky objects. You pays your money... What To Look For (used_look) 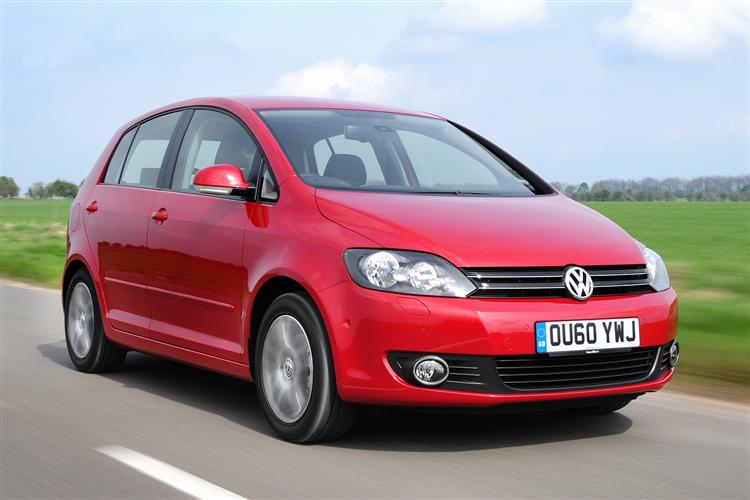