V FOR VICTORY (some text hidden)

Vauxhall fundamentally changed the way we bought panel vans in the UK. When the Vivaro was first launched in 2001, the van market was a carve up. If you wanted inexpensive you bought a Transit. If you wanted to spend more, you went for a Volkswagen or a Mercedes. These days, things are very different and the Vivaro has been a key player in delivering customers a real alternative and in forcing its rivals to up their respective games. Here's what to look for when shopping for a used example.

The Vivaro owes its existence to another van, the Renault Trafic. That van was first introduced in 1981 and had a nineteen year run at the market, but when Renault needed to replace it, rather than take on the costs of developing a new van platform all by itself, it cast around for partners willing to share the costs and got two for the price of one; Nissan and Vauxhall. The Renault Trafic, the Nissan Primastar and the Vauxhall Vivaro were all launched together in 2001, the majority of these vans built in Luton with some screwed together in Barcelona. There was a small facelift in 2006 where the indicators were moved from the front bumpers into the headlamp housings. The 750,000th 'Vivaro-type' van ran down Luton's line in 2010 and it was during this year that the van had a refresh, with a better quality fascia, more standard equipment, the introduction of the Sportive trim and an extension of the service intervals from 18,000 to 20,000 miles. These versions of the Vivaro continued to be sold until its replacement with a proper second generation model in 2014.

What You Getword count: 478

Slotting in above the Combo model and just below the well respected Movano panel van, the Vivaro targets buyers wanting a maximum payload of up to 1.2 tonnes. There are standard and high roof versions, long or short wheelbases, low and high-floor dropside models, Double Cabs and a stylish 'Sportive' model. Those in search of a minibus can choose short or long wheelbase Combi variants or a full 12-seat version. Air conditioning's standard and an impressive range of infotainment systems are on offer, including colour sat nav. Vivaro buyers also get standard ABS and optional ESP stability control. A wide range of Vivaro variants are on offer, up to 2.9 tonnes in gross vehicle weight. Payloads are 1161kg for the 2.0-litre models and 1173kgs for the 2.5 CDTi. Plus there are maximum trailer weights of 2000kg (braked) and 750kg (unbraked). There are two wheelbase options (3098mm and 3498mm) and two roof heights giving a maximum load volume of over 8m3. The short-wheelbase low roof panel van has a length of 4.78m, a width of 1.90m and a height of 1.96m. Inside the short wheelbase version, the load area is 2.41m long and 1.32m high. To save you doing the sums, that means a loading capacity of around five cubic metres. Opt for the long wheelbase model and that rises to nearly six cubic metres, thanks to a vehicle length of 5.18m and a load area length of 2.81m. Enough, in other words, for three Euro-pallets. Go the whole hog and get the long wheelbase, high roof model and there's a load volume of 8.36m3. To protect the cab area, there's a full-height steel mesh grille, with a more sensible full bulkhead available with or without glass as an option. To help access all the Vivaro's space, a one metre-wide sliding door is fitted as standard on the passenger side. A step inside the side door aids access, but if you're over 4ft 6in tall you'd better mind your head. A second sliding door is available as an optional extra, as is a hinged rear door opening to an angle of 270 degrees on the long wheelbase version. The normal rear door arrangement is this one, where the left rear door opens first, with stays at 90 degrees which are easily released for 180 degrees. Alternatively, a one-piece, top-hinged glazed tailgate is also available. Combined cycle fuel consumption is at around 40mpg for both 2.0-litre models. If you go for the 2.5 CDTi, it'll inevitably drop - but not too much - to around 37mpg. CO2 emissions are 214g/km for the 2.0-litre models and 232g/km for the 2.5. Operators will also be interested in the Vivaro's 12-year anti-perforation warranty, low insurance costs and servicing requirements that are only every 20,000 miles or two years. There was also a three year / 100,000 mile warranty included with every Vivaro sold. 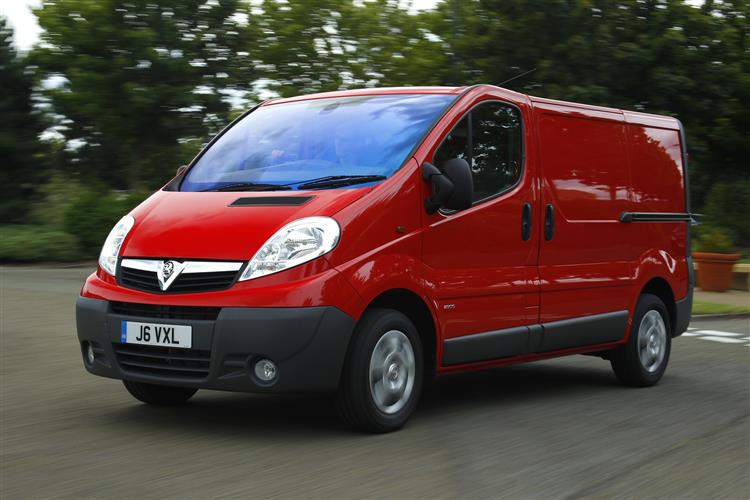