The Volkswagen Passat is a model that needs little in the way of introduction. From lowly beginnings in 1973, the car has evolved at a seemingly glacial pace, never really getting too many ideas above its station, until it arrived at the point where it resides today. That point could probably best be categorised as a full-sized saloon or estate car that offers strong build virtues and sits somewhere between the more blue-collar contenders from Ford, Vauxhall and the like, but not quite on a par with the true premium badges of Audi, BMW and Mercedes. Sub-premium doesn't seem a particularly appealing title but if anything answers that call, it's the Passat. The model we look at here is the 'B7' version, which arrived in 2010.

The seventh generation Volkswagen Passat was, in many respects, something of a knee-jerk reaction from Volkswagen. The European automotive market had been plunged into turmoil by the credit crunch of 2008 and it was cars like the Passat that were really feeling the squeeze. The sixth generation car was still fairly fresh, having debuted in 2005, but sales were haemorrhaging. Volkswagen needed to do something and fast and that response was the car we look at here, the Passat B7. In many regards, it can probably be regarded as an extensive facelift and rejig rather than a model that was new from the ground up. Under the bonnet, efficiency and affordability were the watchwords, with the old 300PS R36 sports saloon variant being retired and the range instead built around a familiar set of engines, 1.4, 1.8 or 2.0-litre petrols or 1.6 or 2.0-litre TDI diesels. The star of the petrol engine line up was a downsized 1.4-litre TSI engine developing 122PS, selling alongside a 1.8-litre TSI unit with 160PS and a 2.0-litre TSI 210PS powerplant. Diesel models would account for the lion's share of sales and here customers got a 1.6-litre TDI unit producing 105PS and a 2.0-litre TDI engine available in two power outputs - 140PS and 170PS. Each of the engine ranges could be specified with a choice of manual or DSG twin-clutch sequential gearboxes. In June 2011, Volkswagen brought economy into even sharper focus with the introduction of improved BlueMotion Technology versions with low rolling resistance tyres, suspension lowered by 15 mm at the front and 7.5 mm at the rear, plus a revised radiator grille and underbody panel to minimise drag. The saloon was also fitted with a compact rear spoiler. March 2012 saw the introduction of the rugged Passat Alltrack estate, an all-wheel drive drivetrain drawing power from either a 2.0-litre TDI 140PS diesel with a six-speed manual gearbox or a 2.0-litre TDI 170PS unit with the six-speed DSG transmission. By 2012, the 170PS 2.0 TDI unit had been uprated to 177PS and in June of that year, all Passats were fitted with DAB digital radios as standard, before in the October, new 'Highline' models replaced the original SE trim level, gaining standard sat nav in the process. Sporty 'R-Line' Passat variants debuted in May 2013, offering a sportier look and feel though adding nothing new under the bonnet. At the start of 2014, Volkswagen also introduced a couple of luxury trim levels - 'Executive' and the awfully-named 'Executive Style' - while at the same time pensioning off the Highline, Sport and R-Line trims.

The Passat has long been an understated-looking thing, but this seventh generation model pares back the styling still further to a point where it looks coolly minimalist. For this design, the clutter was ruthlessly excised from the boxy silhouette, with the few aesthetic flourishes remaining - LED daytime running lights and a sliver of chrome on the rear bumper - being tastefully incorporated. The surprising result was that at launch, this Passat was initially seen as something of a style leader in its segment. In developing this B7 version, Volkswagen applied many of the lessons they'd learned in creating their luxury Phaeton saloon. Things like sound deadening materials built into the dash and doors and special acoustic film embedded in the front windows cocoon the cabin. Other quality touches included plusher door trims and seats, high-end fascia materials and subtle ambience lighting for a distinctly up-market feel. But despite the handsome styling and the 'too cool for school' interior, Volkswagen were keen to reassure buyers that this Passat hadn't gone all style-conscious and superficial. It was, after all, still very practical, the saloon version offering 565-litres of boot space, a figure that could be almost doubled to 1,001-litres once the rear seats were folded down. For true space though, buyers needed to look at the estate, which offered a gargantuan 1,731-litres of capacity with the rear seats dropped. What To Look For (used_look) 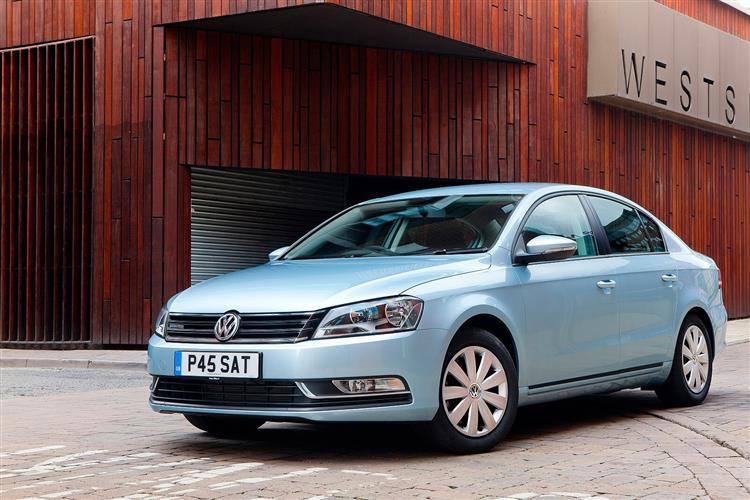