There are really only two types of genuine car enthusiasts. Those that have owned an Alfa Romeo and those that have owned many. Of course, there are some people who get a bit frightened at the prospect of a used Italian car, but fear not. The days when Alfa build quality was something that of a vague concept have long since gone. As a person whose first car was an Alfa Giulietta in the Eighties, I can state this quite unequivocally. Granted, it wouldn't be hard to better that car's reliability record, but its latter day namesake is a car I wouldn't hesitate in relying upon. Here's what to look for when choosing a used example.

When Alfa Romeo resurrected the Giulietta badge in 2010, it was in many ways a present to itself. The company celebrated its centenary in that year and wanted a model with a bit of charisma to act as a marker to progress. Those of you with long memories, or an itchy Google finger, probably know about the Giulietta launched in the 1950s. That was rather lovely. Those of you who recall your clutch slave cylinder falling off on the M27 will remember the somewhat frail, sports saloon from the Eighties. Okay, maybe that's just me. Whichever model you recall, the rebooted post-millennial Giulietta was absolutely nothing like anything that went before. It's a five-door hatchback and is targeted at the niche models in what car makers call the C-sector. This is the area of the market populated by VW Golfs, Ford Focuses and Renault Meganes, but the Giulietta wasn't aiming at mass appeal. Its importers set a target of 6,000 cars per year, compared with the 120,000 Focus models that churn out of dealerships. What Alfa wanted was the customer who was looking for something a little bit different. If you liked the style statement of an Audi A3 but didn't want to spend that sort of money, the Giulietta was a very interesting alternative. It didn't take long for Alfa to start improving the breed too. At launch, you chose between 1.4-litre petrol engines of 120 or 170bhp, plus a hot 235bhp 1.75-litre Cloverleaf. Diesel power came courtesy of a 105bhp 1.6 or a 170bhp 2.0-litre. Now you don't need to have the marketing savvy of Steve Jobs to realise that there was a huge hole in the diesel engine range and that was promptly plugged in February 2011 with the introduction of a 140bhp 2.0-litre diesel. October 2011 saw the introduction of the TCT twin-clutch transmission. Available with either the 1.4 TB MultiAir 170 bhp petrol or the 2.0 JTDM-2 170 bhp diesel engine, the TCT offered Start&Stop to help save fuel in urban traffic. The three-year warranty was upgraded to a five-year deal in April 2012 while in August of that year the Sportiva trim was added to the line up. A real rarity arrived in May 2013 when Alfa Romeo sold six Giulietta 1.4 TB MultiAir 170 bhp FF6 Limited Editions, commissioned to celebrate Alfa Romeo's involvement in the high speed, Fast and Furious film franchise. There was also a Collezione special edition launched at the same time. The Giulietta was updated with a facelifted car at the start of 2014. What You Pay (used_pay)

The Giulietta takes the styling cues of the MiTo and transfers them, rather successfully it has to be said, to a bigger car. It is very colour sensitive, though so think long and hard when choosing your vehicle. The overall silhouette of the car is nothing radical but the detailing is beautiful. I don't think I've ever seen a pair of rear doors so artfully disguised, the blade-thin shutlines disappearing into the rear wheelarch line and the door handles hidden in the window frame. The rear three-quarter view is maybe the prettiest, with the Brera-style tail and the rising waistline of the car giving it a muscular, purposeful stance. You'll need some decent alloy wheels on it to do it justice though. It gets even better inside. The fascia features the classic Alfa cowled dials and, dependent on how much money you've spent, some lovely leather trims. The pedal set looks great and the sweep of the dashboard with its high quality instruments inset into it also looks the part. Some of the materials are still not quite up there with a Golf but the Alfa counters with a bolder design that makes the experience look very special indeed. There are a number of telling detail touches too. The bonnet release catch is switched to the right for right-hand drive cars, and the bonnet raises on hydraulic struts to display a very neatly finished engine bay. There's a massive range of adjustment for the steering wheel, which is just as well as the driving position feel quite high set. There's tonnes of headroom up front but, as is often the case with hatchbacks of this size, the back is a little tighter on legroom. You won't need to pack light, though, because round the back, there's a decent 350-litre hatch. Build quality seems very impressive with excellent refinement and a solid record for the engines. Alfa Romeo was confident enough to offer 18,000 mile service intervals. What To Look For (used_look) 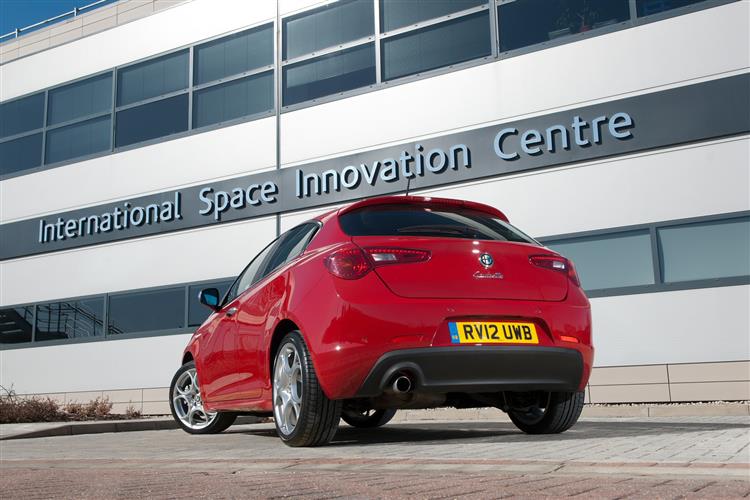