The MiTo has been Alfa Romeo's most convincing and successful small car since the legendary Alfasud. Designed to tackle boutique rivals such as the MINI and the Audi A1, the MiTo sold well straight off the bat, despite being part of an Alfa product portfolio that was slimmed down to just two model lines. If you're shopping for this car in the secondhand market, it's best to ignore the early 2009 models and go for a version produced from 2010 onwards, that being the point from which the range benefitted from some significant engine upgrades. Here's what to look for when choosing a used example.

It took a long time for us to see a product that properly competed with BMW's MINI. That car proved that European drivers were prepared to pay quite a premium for something three-door and compact, provided it was stylish, sporty and had the right brand cachet. Step forward Alfa Romeo's MiTo. It was launched in the UK early in 2009 but substantially improved less than a year later with the introduction of hi-tech Multijet II diesel and revolutionary 1.4-litre MultiAir petrol units. It's these 2010-onwards models we look at here, cars that lasted until a further revised range was introduced in late 2013. That MiTo name is a clever play on words, combining as it does the first two letters of Milan (where Alfa Romeo was conceived) and Turin - or in Italian 'Torino' - (where the cars are made). It's also the Italian for 'myth', or legend, a nod to the ambitious future the brand has in mind. Yes, this car is a lot cheaper than the larger Alfa Romeos you may have been used to, but it's also still pretty profitable given that the money to develop its underpinnings and engines was already spent a few years before this car's original launch on its close cousin, Fiat's Punto. Fortunately for potential buyers, the two cars have a very different feel thanks to the MiTo-specific steering, seating, suspension and brakes. Its engines are tuned differently too and of course, there are these unique looks. Other developments since the 2010 upgrades? Alfa introduced a Turismo Sport special edition in 2010 and the TCT twin clutch transmission in early 2011. The range underwent quite a significant reshuffle in 2011, streamlined from 17 versions to nine, with both Turismo and Lusso trim levels being replaced with the Sprint. Entry level versions became known as Progression, while Distinctive and Quadrifoglio Verde versions replaced Veloce and Cloverleaf trim levels. The three-year warranty was upgraded to a five-year deal in April 2012 and the 900cc TwinAir engine debuted in July 2012. The Mito Sportiva model appeared a month later, based on the Distinctive trim but with £1,500 worth of option upgrades for a price hike of £750. A MiTo Live special edition appeared in 2013 and towards the end of the year, a facelifted 2014 model year car was announced. What You Pay

What You Getword count: 249

Most cars have some kind of styling brand identity but with an Alfa, the whole shape has a unique look that could belong to no other marque, from the serpent-eating-baby badge on the shield-shaped front grille to the rounded jewel-like LED tail lights. The sleek look with its slippery 0.29 Cd drag co-efficient is derived from 450bhp Alfa's 8C Competizione supercar and is one you'll either love or hate. Unfortunately, this is a three-door-only shape, but at least there's decent space in the back for a couple of adults on shorter journeys, even if it is a little awkward for them to get in to start with. There's a lot more room back here than the pathetic berths offered by a MINI though and the 270-litre luggage bay is nearly twice that car's size, even if its opening is a little narrow with a high-ish loading lip. As usual, you can extend the space on offer by pushing forward the rear seat - though the usual split-folding arrangement you'd expect was, rather meanly, offered at extra cost on original base-trimmed models. If you're going to pay premium money for something sized somewhere between a supermini and a family hatchback, then you want it to feel pretty special inside as well as out - and the MiTo doesn't disappoint. The main dials are hooded in true Alfa-style and the carbonfibre-look dashboard covering is part of a variety of racy trim materials employed to impressively up-market effect. What To Look For 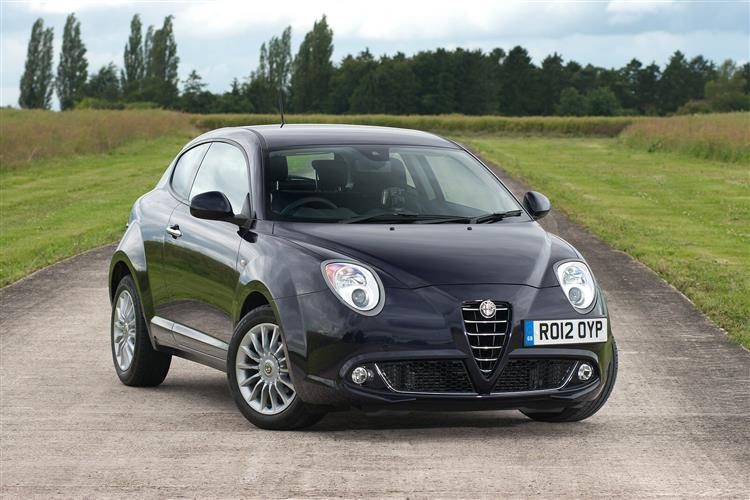