As a company, Land Rover might be better known around the world for its Defenders and Range Rover models, but there's no more accurate barometer to the health and strength of a company than its entry-level cars and for some years now, Land Rover's baby has been the Freelander 2. That it has become the benchmark against which all others are judged is testament to the success it has enjoyed. It's a model that's been continually improved as well, and the version we take a look at here is the 2011 model year car which was unveiled at the tail end of 2010 and lasted right through to its replacement by a version that was further facelifted and brought to market in August 2012.

The Land Rover Freelander 2 first went on sale in the UK in 2006, but such has been the pace, not only of development of the vehicle but the economic background in which it's been sold, that the Solihull brand had to work constantly to improve and tune its offering. Having survived the worst years of the credit crunch in 2008 and 2009, Land Rover was actually in reasonable shape during the period of sale of the car we look at here. In 2010, the Freelander 2 led an increase in company sales, with new registrations up nearly 40 per cent on the previous year - primarily thanks to the small but significant upgrades made to the version we're going to look at here, produced between 2010 and 2012.

What You Getword count: 172

At the front where the door mirrors are 10% bigger, there's a sleeker bumper assembly incorporating restyled front fog lamp bezels and revised Halogen projector headlamps flanking a smarter front grille that's darkly painted on TD4 models but more brightly finished on plusher SD4 variants. At the back, there are revised rear tail lamps either side of a bright full width trimmed strip. Rear seat accommodation is miles better than was offered by the first generation Freelander, but it's still only average by the standards of the current compact SUV sector and three burly adults would certainly be a squash across the back seat on anything other than shorter journeys. Still, that's also true of most rivals. There is decent luggage room - between 755 and 1670-litres, depending on whether you're using the rear seats which fold down neatly. It's a pity the rear window glass doesn't open so you could chuck in small bags without lifting the tailgate but there's a long flat load bay, plus there's a retractable luggage blind. 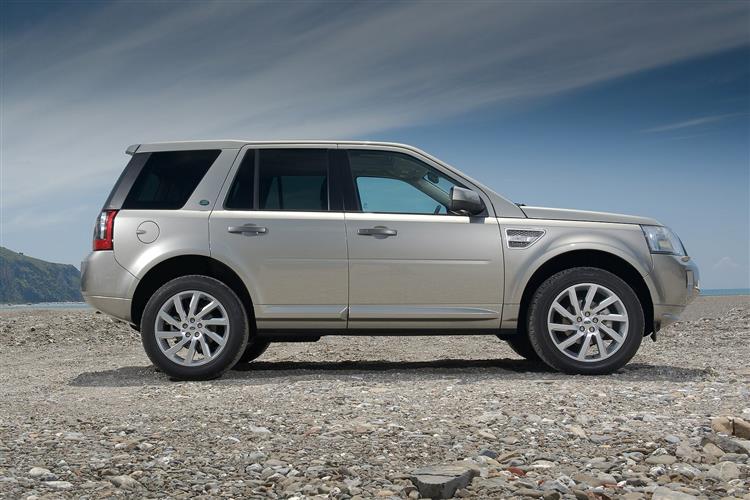