AFTER AN EIGHT? (some text hidden)

Manufacturers take great pride in telling the public how sporty their cars are. It goes down well because, although things like safety and comfort come higher in the priorities of many buyers, they aren't really very exciting. Peugeot's 308 was yet another family hatchback that emerged amid talk of finely-honed driving dynamics and lively performance. It even appeared to have the striking looks to back it all up. In reality though, this was a car with strengths that lay elsewhere and on the used market, that's not necessarily a bad thing.

Go back in time to the days of the Peugeot 205 and 306. At that stage, the French manufacturer had a great reputation for producing sporty hatchbacks but since then, it has edged in a more conservative direction. The 307 replaced the 306, bringing big improvements in quality and sophistication but also upping the weight of the car to an extent where the engines and the chassis had a lot to contend with. Anyone expecting the 308 to veer back towards Peugeot's hot hatchback glory days was to be disappointed. The car arrived in August 2007 with tangible improvements over its 307 predecessor. The driving experience was improved but it still wasn't particularly sporty and the highlights were the refinement, safety levels and the well-appointed interior. The dramatic exterior was something of a love it or hate it affair. A straightforward trim level range of Urban, S, SE, Sport and GT provided a wide range of choice. There were three and five-door bodystyles and the engine range had a good spread of petrols and diesels. Peugeot's strong HDi oil-burners were largely carried over from the 307 but on the petrol side, a new generation of engines developed in conjunction with BMW took pride of place. The SW estate version arrived in 2008 and by 2009 there was a 308 CC convertible with Peugeot's favoured folding hard-top roof. In 2010, Peugeot introduced the 200bhp 1.6-litre THP engine in range-topping GT trip, creating a fast version that wasn't quite focused enough to justify the term hot hatch.

What You Getword count: 389

The 308 inherited the taller than average roofline that the 307 used to good effect in creating a roomy and airy interior but by shaving 12mm from its height while growing in terms of both length (by 74mm) and width (by 85mm), it achieved a far more dynamic stance than its predecessor. The long front overhang of the 308 adds to this impression, creating a wedge-shaped profile that brings a further sporty element to the car's shape. The actual detailing is a little less cut and dried. The huge central air-intake that dominates the front end wasn't universally popular but Peugeot had adopted it across the model range so it was always going to make an appearance on the 308. The rear of the 308 has more of a bulbous look to it, helping to maximise luggage space that runs to 430 litres and can be extended to 1,398 litres by folding the rear seats. If you need more room, the SW estate version has up to 2,149 litres of space. Passenger space isn't particularly generous though, with legroom in particularly short supply. The interior design takes a sober but classy approach. It feels notably more upmarket than inside of the 307 and even more spacious. The higher specification models in the range are embellished with liberal use of chrome and all derivatives benefit from expensive looking plastics with the lighter colour options proving particularly eye-catching. The middle section of the dash slopes down into the centre console bringing its controls closer to the driver and creating a snug cockpit effect, but you sit a long way back from the base of the steeply raked windscreen with a huge expanse of dashboard to look out across. This, combined with the 308's long front overhang, can present problems when manoeuvring but the A-pillars, a constant impediment to the driver's view in the 307, are thinner for improved visibility. Equipment on all variants runs to power steering, remote control central locking with deadlocks, electric front windows, a steering column adjustable for reach and rake, a CD player, front seat height adjustment, a trip computer and electrically operated door mirrors. There was a wide choice of different transmission options, including a six-speed manual gearbox, a six-speed EGC semi-automatic unit and a full six-speed automatic fitted to the flagship 2.0 HDi 136 model. 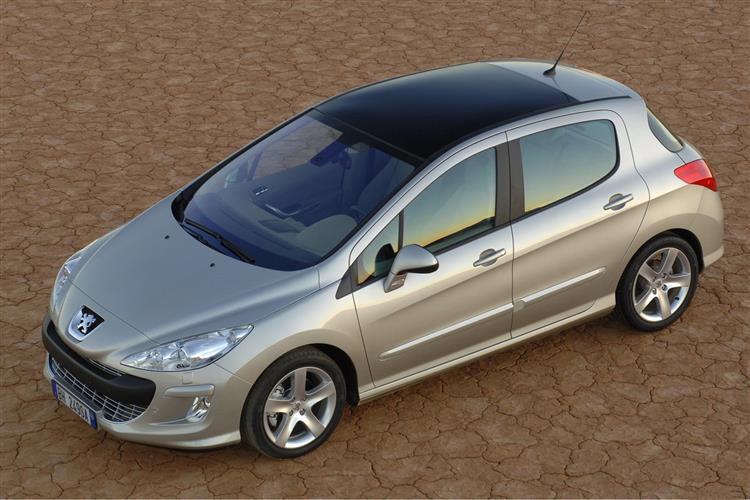