Sometimes you just need a little more. You pay that bit extra to upgrade to Club Class, you upsize your takeaway order, you value the utility of a spare bedroom, even if you never invite guest s to stay. More isn't always better, but every now and again, it's reassuring to have a little extra in hand. That's Citroen's take anyway and in the slinky shape of its Grand C4 Picasso, it offered its compact MPV in a form that didn't mean you had to pack light. Here's how to track down a used example.

The Grand C4 Picasso arrived on these shores in early 2007. Its path was eased by the enthusiastic reception enjoyed by the standard length car a year earlier and it soon became one of the best-selling seven-seat MPVs. Buyers chose between 1.8 and 2.0-litre petrol engines and 1.6 or 2.0-litre diesels. A subtle but important set of updates arrived for the 2010 model year. The interiors got cleverer. The value proposition improved as customers received more standard equipment. There were small styling tweaks to the exterior. Perhaps the most significant was the ditching of the old 1.8-litre diesel engines in favour of vastly more efficient 1.6-litre e-HDI powerplants. This car ran all the way through to the 2013 model year when it was replaced by an all-new Grand C4 Picasso, the streamlined shape giving way to more cubist exterior architecture.

What You Getword count: 309

Most people we've spoken to reckon the Grand C4 Picasso remains one of the best looking MPVs on sale and the styling tweaks on the post-2010 models didn't change that view. These changes were relatively minor, comprising LED daytime running lights, a revised front bumper, redesigned tail lamp clusters and more prominent double chevron badges on the front grille and tailgate. There are seven seats in all Grand models and, unusually in this class of vehicle, there's space for a couple of soft bags in the boot with all the seats in place and stowage can be augmented by useful cubbies. Even if you're tall, getting into the rearmost row of seats isn't too taxing, thanks to the clever way the outside seats in the middle row fold up like cinema seating and slide forward with the tug of a handle for easier access. You wouldn't want to stay cooped up in the back for long though. It's far better to leave these berths for the kids or fold them under the floor to take advantage of 672-litre capacity that's then created. Fold all of the seats down, a feat which can be performed in an impressive 20 seconds, and there's a massive 1,951-litres to play with. There's no handbrake in the C4 Picasso, at least not in the traditional sense, and the gearlever is either dash-mounted - or completely absent on the EGS-equipped automatic models which use a column-mounted stalk and paddle shifters to operate the transmission. This creates a wide space between the front seat and a feeling of openness around the whole front of cabin area. Storage bins pop-up at every turn in this vehicle, including a particularly neat air-conditioned one beneath the dash to keep drinks cool. And although some of the plastics seem less than robust in places, the build quality is generally impressive. 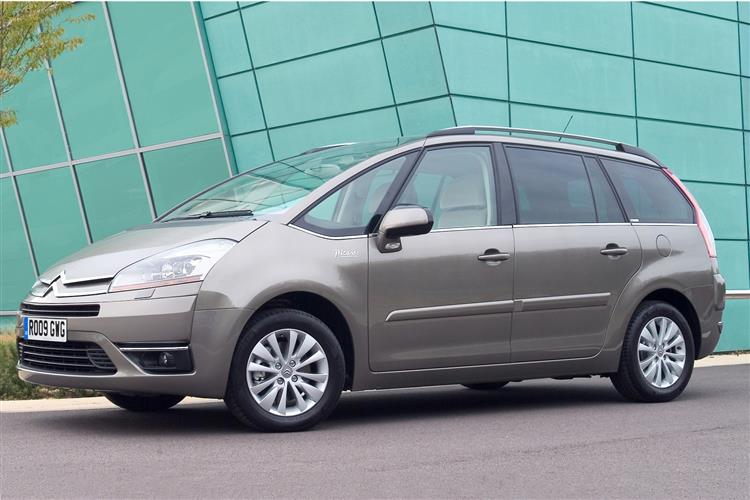