OUT OF TIME (some text hidden)

The Subaru Impreza WRX STi used to be a legend. In its glory days it was the Colin McRae or Richard Burns car, painted bright blue with gold wheels, fitted with an exhaust like a howitzer and beloved by a whole generation of youth who could never imagine anything cooler. But, like many cult items, it had its day. It morphed into something a bit lower key and that car is the one we're taking a look at here. The WRX STi may have toned down the aesthetics but beneath more sober suit was a car that was just as capable as ever. Here's what to look for when buying used.

There are two simple mistakes car manufacturers are often tempted into. The first is a big mainstream brand trying to play the niche role. The second is the opposite and is one that Subaru blundered into with its third generation Impreza. Although it must have seemed irresistible to go chasing the big numbers, tilting at the likes of the Ford Focus and the Volkswagen Golf with its hatchback Impreza, the policy fell flat on its face. Subaru always was a niche, engineering-led business and it couldn't match the development budgets ploughed into the big mainstream heavyweights. It showed. The decision backfired on the sporty WRX STi model too, introduced at the start of 2008. The traditional Impreza buyers didn't warm to this new model, many defecting to rival Mitsubishi's Evo X, whilst other realised that more fuel-efficient front-wheel drive hatches offered just as much fun and pace. Sales were glacial, not helped by the strength of the yen, which started to push WRX STi prices upwards. Subaru's abandonment of rallying also cut another strand of buyer involvement. Most examples you'll find will be five-door hatches but for the 2011 model year, a saloon version was added to the range to try and tempt those who still remembered original STi models: it made no difference to sales. So the car was a flop then? In a commercial sense, yes. Subaru now defines itself as an SUV manufacturer, drawing a curtain on the dismal sales of the last generation Impreza. As buyer behaviours changed and customers looked elsewhere for their jollies, the WRX STi looked a bit of a relic. Type UK four and five door models, as well as 330S and the eye-wateringly expensive Cosworth SC 400 models came and went without denting the rise in sales of the front-wheel drive superhatch. What none of this does is explain just how brilliant these Imprezas are to drive on British roads in typical British conditions. It's just a shame they weren't so well attuned to British insurers and British fuel prices.

What You Getword count: 225

The rather anonymous looks of the standard Impreza hatch have been transformed with the addition of heavily blistered wheel arches, giving the STi a properly macho look. This allows the wheels to be pushed out another 45mm at the front and 40mm at the back, giving the car a pugnacious, foursquare stance. A mesh front grille and a deep bumper design with air vents throwing air at the intercooler also up the ante. Side skirts give the effect of visually lowering the car, while a high-mounted spoiler and quad exhaust pipes will leave those who have just been overtaken in little doubt as to what's just blown by. Colour choices include the iconic WR Blue, while traditionalists will not want to miss out on the optional gold alloys. There has always been a practical side to the Impreza and this STi is no exception with 95mm extra in the wheelbase compared to the old car. This brings a useful increase in interior space that will go down well with family buyers, as will the more compact rear suspension design which facilitates a 170-litre increase in boot space to 538-litres. At least the interior is a big step forward. The tough plastics and staid design of the old car have finally been axed in favour of the superior quality materials and modern layout in this model. 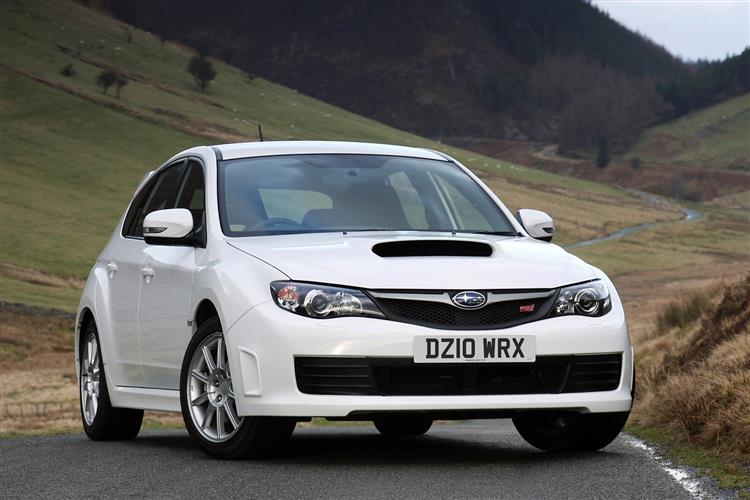