We've become used to the Citroen C4 Picasso being one of the slinkiest of MPVs, with strong design values and a decent array of engines. Yet it took some time for this model to cement its reputation with the British public; a clientele who were more accustomed to paying very little for the somewhat rough and ready Xsara Picasso. Educating this group of buyers into the ways of new Citroen took a little time but by the time the facelifted C4 Picasso arrived in 2010, the message was hitting home and sales have been encouraging. Here's how to bag one of the 'Gen 1.5' C4 Picassos.

It's easy to forget quite what a departure the C4 Picasso was when it first arrived in 2006. Here was a car vastly more sophisticated than its predecessor, the Xsara Picasso, which commanded a higher price and which Citroen didn't fully commit to, selling it alongside the bargain basement Xsara Picasso for quite some time. A subtle but important set of updates arrived for the 2010 model year. The interiors got cleverer. The value proposition improved as customers received more standard equipment. There were small styling tweaks to the exterior. Perhaps the most significant was the ditching of the old 1.8-litre diesel engines in favour of vastly more efficient 1.6-litre e-HDI powerplants. This car, in both standard and long-wheelbase Grand Picasso versions, ran all the way through to the 2013 model year when it was replaced by an all-new C4 Picasso.

This remains a good looking car, with a completely different body shape from its 7-seater Grand C4 Picasso stablemate from the A-pillar backwards. As for the changes visited upon this improved version, well, you'll need to be something of a spotter to identify them. On plusher models, LED daytime running lights sit around a revised front bumper, there are redesigned tail lamp clusters and more prominent double chevron badges on the front grille and tailgate. Otherwise, things are much as before, this remaining as versatile a vehicle as most small families will really need. Inside there are plenty of storage bins and cupholders: even storage space under the floor at the rear. Particular thought though, has gone into making the luggage bay as versatile as it can be. The boot features 500-litres of space, not much less than you get in the 7-seat version of this car. To give you a better idea of what that means, that's 40% more room than you'd get in the kind of Ford Focus-class family hatchback that would cost you a similar amount and occupy approximately the same footprint in the road. To help make the best use of it, Citroen's designers came up with the 'Modubox'. It's an internal storage device designed to take care of all those little items that would otherwise roll around the boot floor. On top models there's even air suspension with a button to lower the ride height for easier loading. But if all of this room isn't enough, then you've simply to push forward the rear seats. A quick tug on the release strap folds them flat into the floor. They're individually mounted so that you can choose between space allocation for people or packages. And with all three flat, 1,734-litres opens up. 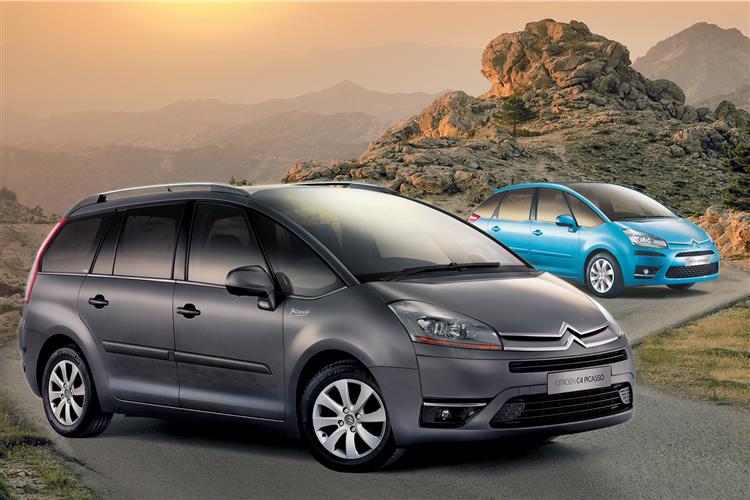