The Subaru Forester may have made its name as an estate car that could do a little bit of off-roading, but in third generation form, it morphed into something quite different. It joined the mainstream and chased the SUV pound, with a particularly polished approach in the mildly facelifted MK3 form we look at here. Mainstream is relative though. It was still a Subaru and that meant characteristic 'boxer' engines, a focus on engineering over glitzy marketing and driving characteristics that majored on fun. They make great used buys as well, with ultra-rugged four-wheel drive mechanicals and owners who tend to use the vehicles but not abuse them. While this third generation model has yet to build the cult status that its predecessors enjoyed, that does mean that the canny used buyer might well be able to sniff out a real bargain.

There aren't too many brands that can boast the sort of fanatic customer devotion and loyalty that Subaru can but even that resource is finite. Subaru's problems with the rising strength of the yen meant that many of its cars grew increasingly expensive and the third generation Forester was a model saddled with just this problem. Originally launched in 2008, the Forester was eased subtly away from the smaller marketplace for 4WD estates and closer towards the much larger one for compact SUVs and Qashqai-like Crossover models. Early Subaru models were sold here alongside farm machinery and beneath the plush polish you get in today's Forester, a bit of that same rugged appeal still remains, creating in this car a much tougher, more solid-feeling product than you'll find in soft-roading competitors. The range was very mildly facelifted in late 2010 with some attention paid to improving interior quality as well, and it's these late Mk 3 models we examine here. Other changes introduced for the 2011 model year brought greater pulling power, lower emissions and greater refinement to the diesel variant that most customers chose. This model was offered for sale right through to Spring 2013 when a Mk 4 Forester appeared.

What You Getword count: 293

In third generation guise, this Forester finally evolved from rugged estate to become taller and wider and therefore something better resembling the kind of RAV4 or Freelander-style small SUV that sells in big numbers these days. This change didn't seem to make much difference to the way people perceived this car when the MK3 version was first introduced in 2008 and the mild mid-term facelift tweaks visited upon this improved version didn't make a huge difference either. Hardly surprising really since on the outside, they amounted to little more than a smarter chrome finish on the front grille and more compact wing mirrors. Inside this revised MK3 Forester, a revised instrument binnacle and a re-designed steering wheel try to lift things a bit but the overall effect here is still anything but sophisticated, with the emphasis on hard-wearing durability rather than slush-moulded style. Probably, that's as it should be, for it all feels in keeping with this Subaru's rugged remit and certainly seems to have been built to last. And anyway, there are compensations. The seats are brilliantly comfortable and visibility around and about from the huge glasshouse is exceptional. In the back, there's far more legroom than you'll find on comparable small SUVs, though as usual in this class of car, three adults will feel rather squashed, though they can at least recline the backrest for greater comfort on longer journeys. The boot meanwhile, offers 450-litres of space, extendable to 1,610-litres should you decide to flatten the 60/40 split-folding rear bench. Plus the front passenger seat can also be flattened if that proves not to be enough. This car is also better suited than most of its rivals to the carriage of heavier loads thanks to the standard fitment of self-levelling suspension. 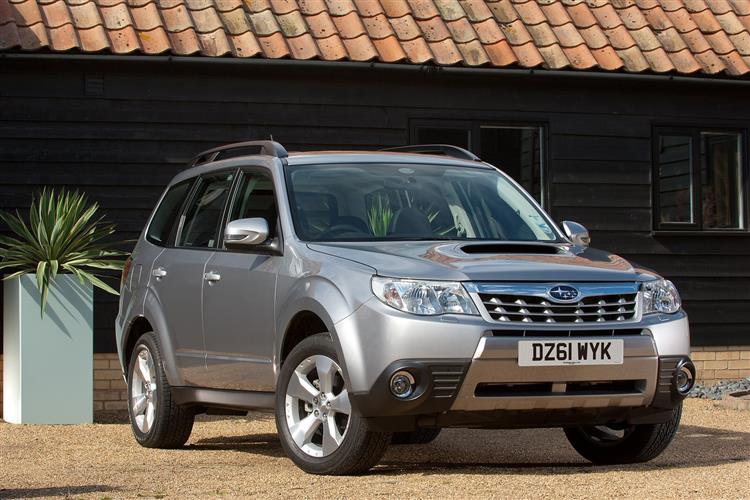