The Mazda CX-7 is a perfect case study of the perils of introducing a car to one market that's clearly been designed for another. When it was first sold in this country, it was only offered with a thirsty 2.3-litre petrol engine and sales suffered as a result. What might have worked really well in California didn't look quite so appealing in a filling station in Croydon. Mazda belatedly introduced a diesel engine for the car and its fortunes picked up a little but by that time the CX-7 was approaching the end of its life. All of which is a bit of a shame, as the CX-7 is a genuinely likeable vehicle and represents a bit of a used bargain, in diesel guise at least.

Mazda, like Ford, had an unfortunate habit of foisting SUV vehicles onto the British market as if we were some sort of afterthought. That only really changed with the introduction of the quite lovely CX-5 in 2012 but prior to that we had cars like the Tribute that never really caught on and this, the Mazda CX-7, which had the promise of being a very good product, but one that never really seemed wholly suited to British market conditions. The clue that this car wouldn't worry the best sellers list came back in 2007 when it became apparent that the only engine option open to British customers was a 258PS turbocharged 2.3-litre petrol engine. This just as the country was nosediving into recession and buyers were downsizing to smaller cars and diesel models en masse. Mazda was left with a bit of a turkey on its books, CX-7 sales being almost negligibly tiny, not helped by constant reliability issues with the petrol engine. Mazda dwelt on this a while and then came back with a revised CX-7, announced in late 2009 for the 2010 model year. Equipment levels were boosted, practicality was improved and the petrol engine was replaced by a much cleverer 173PS 2.2-litre turbodiesel. Sales picked up somewhat, but by then the CX-7 wasn't really new news. The model was quietly discontinued in 2012.

The CX-7 will net a few sales purely on the basis of the way it looks. Probably the most striking aspect of the car is the steeply-raked windscreen. Most SUVs have a rather bluff frontal aspect but the CX-7 has the sort of screen angle that wouldn't look out of place on a Lamborghini. The overall effect is to give the Mazda a very sleek, purposeful look and to instantly rid you of any possible notion that the thing can be taken off-road. Which is just as well, as the ground clearance is minimal. There is a lurking suspicion that the CX-7 is, in fact, built of other Mazda bits. The petrol engine we know is borrowed from the Mazda6 MPS. The front wings look purloined from the RX8 and when you drop inside, the steering wheel looks as if it's been nicked from the MX-5 production line while the workers were looking the other way. The interior is nicely finished although some of the interior materials are a bit Elizabeth Duke at Argos. Space in the rear is adequate but the rear seats aren't endowed with any sliding or reclining features. At least they do fold forward to form a flat load floor. The rather cheap-feeling interior treatment is forgiveable in the light of the asking price. If you want this sort of power but a better finish to the cabin, you'd need to fork out for a 3.0-litre BMW X3, so it's churlish to grumble. Besides, the UK specification CX-7 comes absolutely dripping in standard equipment. Heated leather seats, 18-inch alloy wheels, stability control, traction control, xenon headlights, climate control and a Bose Premium audio system with six-CD auto changer, MP3 capability and no fewer than nine speakers are all on the team sheet. Options include parking sensors, an iPod adaptor, scuff plates and metallic paint. Go for a later diesel car and you'll get leather seats, climate control air-conditioning, cruise control, electric front and rear windows, electric driver's and front passenger's heated seats, a bespoke BOSE premium surround sound audio system with 6-CD autochanger and nine speakers, plus integrated satellite navigation and Bluetooth. 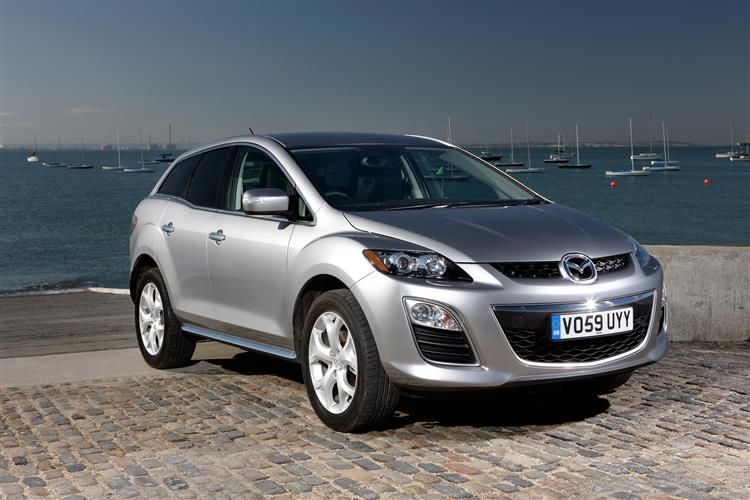