After two generations that hinted at the potential locked into it, the Range Rover really came good in its third generation. In fact it didn't just come good, it became a car in a class of one. We've now got the fourth generation Range Rover which has moved significantly upmarket, so for used car buyers one of the late facelifted third-generation cars makes a fantastic buy, just new enough to still feel reassuring yet with enough on its clock to look temptingly affordable. Here's what to look for when shopping used.

The Range Rover single-handedly laid the foundations for the modern luxury 4x4 sector back in 1970 and has stood astride it like a colossus ever since. Rivals have tried to topple the icon but while some have experienced success in certain areas, none have truly eclipsed this car's unique blend of capability and class. This is the third generation version, launched in 2002, a model that moved the game on further still by establishing a new super luxury sector for SUV ownership. But times are changing and Land Rover's flagship must change with them. Forty years on from its original launch, probably its biggest threat comes less from rival models and more from social acceptance and environmental pressures. And accordingly, just as this car can adapt to meet almost any kind of challenge, from cross-continental cruising to trans-Siberian deserts, it's also evolved to offer a greener, more efficient demeanour. Or at least it has in the diesel form that almost all customers choose. Boring out the old 3.6-litre TDV8 to 4.4-litres in 2011 and upping its power to a potent 308bhp might sound like a strange approach to eco-friendliness, but the figures suggest substantial improvements in both economy and emissions. Which should mean you can enjoy this car's unrivalled go-anywhere luxury with a clear conscience. February 2012 saw the old TDV8 Vogue and Vogue SE trims replaced by the TDV8 Westminster run-out trim designation, while TDV8 Autobiography and 5.0 Supercharged Autobiography models were also introduced. The Ultimate Autobiography limited edition Range Rover was launched in February 2011, featuring two stand alone electric rear seats to enhance space and comfort for the rear passengers, making the Ultimate Edition an excellent chauffeur vehicle. The addition of a rear console extension, including a machined aluminium laptop table and drinks chiller and two Apple iPads as standard (the first car to do so), took the Range Rover rear seat experience to new levels of luxury. The model could be ordered in 2 unique colours, had unique 20-inch wheels, body coloured door handles and smoked grilles and gills. 500 cars were produced.

The more a Range Rover changes, the more it stays the same. So while this improved model features small enhancements to the grilles and side vents of diesel models, it's still as instantly recognisable and classy as ever. Taking pride of place at the front end is a deep grille with crisp metal louvres in front of a heavy duty aluminium mesh. The 5-seater cabin looks as classy and cosseting as ever with its clean, elegant controls and even higher quality materials that see leather extended to cover the full dash and roof lining. The big seats are the ideal place to sit out big journeys and there's a host of technological gadgetry built in. At the back, you enter through rather narrow door openings to find that though this generation model certainly offers more head and legroom than previous ones, it's still not as spacious back here as you'd expect from the kind of luxury saloon that would cost much the same. Still, Sheikhs could specify laminated privacy glass and reclining rear seats, plus a button that electrically pushes the front passenger chair forward to increase rear legroom, should it not be in use. No complaints about the boot size though, big enough surely to accommodate the 7-seat option that Land Rover still refuses to offer on this car. You get between 994 and 2099-litres of space, depending on the position of the seats. Plus there's that lovely split tailgate so you can watch field sports in comfort. At the wheel, the instruments are in the usual place but they aren't real instruments in the manner that we're used to. This Range Rover replaces the traditional speedo and rev-counter clocks with digital facsimiles projected on a 12" wide TFT screen. In normal mode, you'd have to look twice to verify that anything was amiss as the display looks conventional but off road, the rev counter moves aside in favour of a graphical drivetrain that shows which wheels are being driven, which diffs are locked and much more. In fact, the virtual screen can be customised to show anything from the outside temperature to navigation information, telephone system settings or wheel articulation. Controls on the steering wheel like those of a games console controller can be used to adjust the various functions without recourse to the main 8-inch touch screen display at the centre of the dash. For this screen, Land Rover's engineers have developed clever Dual View technology, enabling it to simultaneously display a different image to driver and passenger. So at the wheel, you can, say, view the navigation display while your passenger watches a video. Neat. 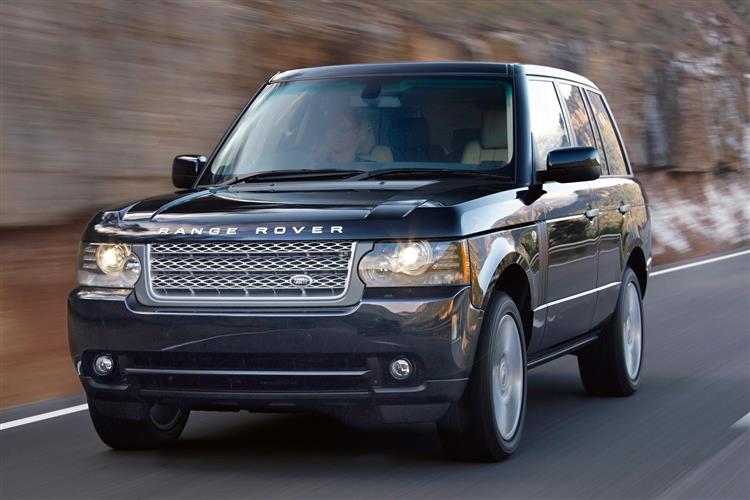