GTI TO THE POWER OF 6 (some text hidden)

There are some buyers who, when looking for a hot hatchback, will only consider a Golf GTI. After all, this is the car that launched a whole genre. The GTI's badge became synonymous with this class of car, much in the same way that vacuum cleaners are widely referred to as Hoovers, inline skating is Rollerblading and artificial turf is usually called Astroturf. These genericised trademarks aren't always welcomed from a purely legal perspective but they remain about as big a tribute as there can be to the products which had the biggest impact in their fields. So if you're looking for a GTI, you choose the GTI right? Here's what to look for when buying the excellent sixth generation Golf GTI, built from 2009 through to 2012.

Where's the justice in the world? The Volkswagen Golf GTI Mk 6 was one of the great Golf GTIs, yet it was only built for three years. The FSO Polonez on the other hand, which most would agree is a hateful piece of tat, soldiered on for 24 years. Which leads us on to a point most of you will realise. Even if you have zeroed in on the Golf GTI as the hot hatch you want, there are good Golf GTIs and there are, well, maybe not bad ones but distinctly less good iterations. Let's examine the evidence. The Mk1 established the brand and was taut, fun and just generally brilliant but most have been crashed, rusted to pieces, modified beyond recognition or squirrelled away in dehumidified garages. The Mk2 GTI grew a little bigger and spawned the lovely 16v model. Then it all went a little pear-shaped with the flabby Mk3 GTI. The MK4 resurrected things in the styling department at least and although it wasn't the liveliest drive, we started to see some decent power. Cue the Mk5 which featured fully independent rear suspension and was a hoot to punt along a country lane. It was a real return to form but it wasn't without its issues. In focusing on its driving dynamics, Volkswagen temporarily took their eye off the ball when it came to some of the materials quality and many of its key rivals offered interiors that were the equal or better. The Mk6 Golf GTI is, in many regards, the sweet spot. Available in both three and five door forms and with manual or DSG sequential gearboxes, it retained the Mk5's spirit but upped the quality and improved efficiency. The 2.0-litre engine that powered the GTI was little changed from its predecessor's, the engine getting an additional 10bhp, taking it to 207bhp. Plus, the styling was made a little more polished and the interior felt a good deal plusher. In May 2011, the Edition 35 model was announced, with a 232bhp power output and a few extra pieces of equipment such as '35' badging, unique alloy wheels, a reprofiled side sill design, and a more aggressive front bumper. What You Pay (used_pay)

The Golf GTI revels in its status as the founding father of the hot hatchback genre and it isn't about to lower itself by indulging in the lurid colour schemes and tea-tray spoilers favoured by its lower brow rivals. Therefore, its looks are comparatively low key and classy, much like a standard model but with a soupcon of extra aggression bubbling under the surface. Twin exhausts set into the subtle rear splitter, a lower front bumper with large central air-intake and a neat roof-mounted spoiler at the rear are about the size of it. The alloy wheels are 17" in size but the optional 18" items fill the bulging arches more effectively. Inside, the tone of the standard Golf's class-leading cabin is raised by an abundance of chrome detailing. The steering wheel is a pleasure to behold and to wrap your mitts around with its contoured rim, red stitching and three spokes picked out in chrome. The sports seats give good support with their pronounced side bolsters but they're better cushioned than the more extreme chair designs in many of the Golf's rivals. There's a feeling of genuine class in the cabin that no other performance hatch save for Audi's prohibitively expensive S3 can match. With a 350-litre boot and respectable amounts of space in the back despite the fat-backed sports seats, the GTI can even do practical family transport with some aplomb. Buyers have two gearboxes and two bodystyles at their disposal when specifying their Golf GTI. Both three-door and five-door versions are available, with the former sporting slightly more dynamic looks and the latter offering more by way of practicality. The standard transmission is a six-speed manual but Volkswagen's acclaimed DSG twin-clutch gearbox was also available to new model buyers for a £1,200 premium, complete with wheel-mounted paddle shifters. The GTI specification includes dual-zone climate control ESP stability control, ABS brakes and seven airbags, including a driver's knee airbag. What To Look For (used_look) 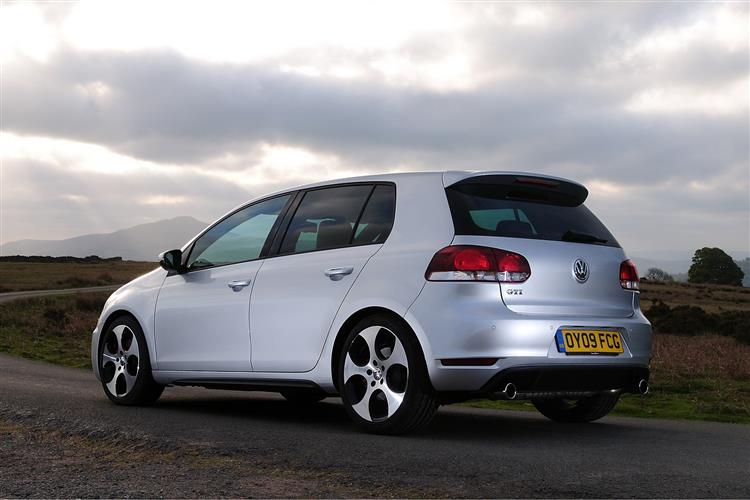