Think Volkswagen Golf and you're probably thinking sober, buttoned-down respectability. Even the GTI hatchback is a most grown-up kind of sporting hatch, presentable in every office or golf club car park the length and breadth of the land. It's smart, sophisticated and in every way inoffensive, which isn't a bad thing but sometimes it would be nice if the car had a bit more snarl, a bit more attitude and a bit more excitement. Providing just that was the concept behind the Volkswagen Golf R. Here's what to look out for when shopping used.

We've had uber Golfs before of course and they've worn the R32 badge. Originally a six-cylinder 3.2-litre car that made a fantastic noise but which didn't handle all that brilliantly, the Mk 5 R32 morphed into a car that was a lot more competent, if a little less exciting. Volkswagen's aim with the R was to mix the thrill of the first R32 with the composure and polish of the later Mk5 model. Introduced at the 2009 Frankfurt Motor Show, it arrived in British dealerships in mid-December of that year and was an instant success. Sold alongside its mechanically similar Scirocco R sibling, the Golf R lasted until the end of 2012, when the Mk 7 Golf appeared and duly pensioned it off. Along the way the Golf R picked up a few gongs, most notably the Top Gear Hot Hatch of the Year award in 2011. It was also updated in October 2011, getting leather upholstery fitted as standard.

What You Getword count: 295

Volkswagen isn't known for its flamboyant styling but to underline the potency of the Golf R, it edged the car in a more dramatic direction. The quickest Golf MK6 features a deeper front bumper with enlarged air intakes, along with a revised rear bumper that incorporates centrally-mounted exhaust pipes and a gloss black diffuser. The main front grill and the wing mirrors are also finished in black, while all R models get xenon headlamps, specially designed rear light clusters and LED running lights. Along the sides, sill extensions further lower a car which already sits 25mm closer to the ground than a GTI thanks to its revised suspension. There are also 18" alloy wheels as standard, with the option of upgrading to a set of 19" items and peeping out between the spokes are the callipers and enlarged discs of an upgraded braking system. The R badge that crops up on the grille is mirrored inside on a set of aluminium kick plates but the cabin is dominated by the grey Alcantara and black cloth sports seats on early cars and leather on post October '11 models. There's more gloss black detailing and revised instruments feature needles that illuminate in blue. In general, the classy feel of the Golf's interior continues to shine through. If the Golf R formula sounds familiar, that's because the same mix of engine and transmission was originally made available on the Audi S3. As with that car, there's a choice of either three or five-door bodystyles. In addition to the upgraded braking system, the Golf R features its own ESP stability control settings which allow the safety net to be disabled in two stages, allowing the driver greater freedom to approach the limits of grip. What To Look For (used_look) 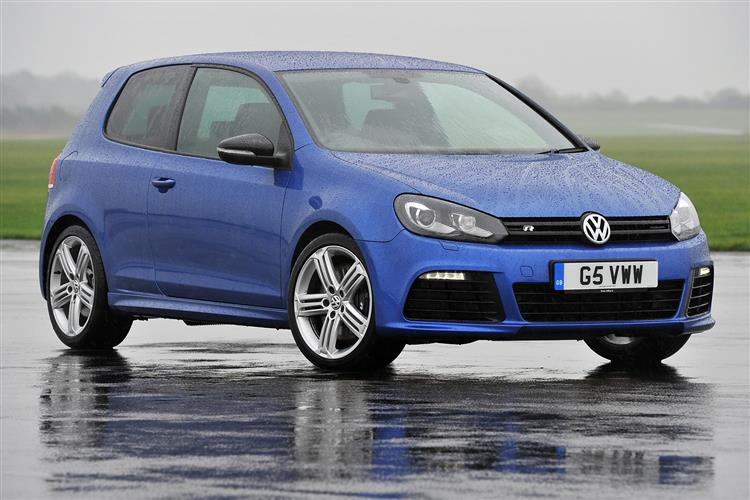