The Mercedes SL has long stood for refined elegance and continent-crushing ability and although the 2008 iteration of this car was viewed by most as a facelift of an existing favourite, it more than justified Mercedes' rightful pride. Okay, so the weighing scales indicated that the SL delivered on sportiness but not the lightness bit of its 'Sport Leicht' designation but at least the car offered big power, decent dynamics and better fit and finish. Here's what to look for when buying used.

One thing the Mercedes SL isn't short of is backstory, with the Sport Leicht badge first appearing as far back as 1954. Since then, the sportiness and lightness may have diminished with each revision but the SL has morphed into a beautifully engineered two seat GT car which attempts to fuse the luxury of an S class saloon with the appeal of open-top driving. The R230 series generation car we're looking at here went on sale in the UK in early 2002 and sold with some success before it was updated by a facelifted version that was launched in 2008. And it's that particular car we're going to focus on. With this improved fifth generation SL, the peanut-light front styling disappeared, replaced with a more angular front end featuring single rather than twin headlamps. At the same time, the efficiency of some of the engines was improved. The old SL 55 AMG rocket ship was replaced by the high-revving SL 63 AMG and an amazing limited run 670bhp fixed roof SL 65 AMG Black Series made a brief appearance at the end of 2008. The SL 300 made its debut as the entry level point in late 2009, supplementing the popular SL 350. Car buyers in the privileged position of having a few grand to spend on a used car for two occupants plus a little bit of luggage have long had the world's most exotic and talented vehicles laid-out before them. The SL's job has always been to convince these big spenders that the optimum destination for their massed wealth is this smooth operator. This model was very good at doing exactly that, breathing new life into a very successful design.

The 2008-onwards SL model we're looking at here replaced the peanut-style headlamps of the old model with massive single pod bi-xenon units that look surprisingly good. The Intelligent Light System provides five different lighting modes which activate automatically. Motorway mode, for instance, is activated in two stages when speeds exceed 90km/h, increasing the driver's range of vision by 60 per cent. When the active light function is activated, the headlamps pivot with the steering. There are also cornering lights that illuminate the verge below 70km/h. Twin powerdomes on the bonnet and gill-style air outlets on the front wings also give the SL a more aggressive attitude. The interior was given the once over as well as part of the 2008 facelift, with a completely restyled instrument cluster that saw the speedometer and the rev counter finished in a classic chronometer design. A three-spoke steering wheel and more supportive seats also debuted. Otherwise the recipe is classic SL. With the hood down, there's minimal buffeting if you keep the windows and the wind blocker between the seats extended. The roof itself vies with the engines to be the highlight of the whole SL package. You get a 310-litre luggage capacity in the SL that only drops to 206-litres with the top down. There's even a button that raises the whole roof cassette when it's in the boot so you can get easier access to your bags. Build quality as a whole is notably tighter that it was when this R230 generation model was first launched in 2002. Equipment levels are generous even at the base of the range, with all SL derivatives benefiting from the Mercedes Cockpit Management and Navigation Display (COMAND) system with its CD/DVD player and satellite navigation. Leather upholstery is standard, as are Xenon headlamps, rain sensing wipers, ESP and ASR skid control. Buyers can also take advantage of a huge array of personalisation options to upgrade their model according to their individual taste. COMAND got a bit of a revamp too as part of the 2008 facelift, with a slot for SD memory cards built in, a Bluetooth receiver for hands free mobiles and an updated version of Mercedes' LINGUATRONIC voice control. A Music Register stores around 1,000 MP3 tracks and a saved database enables automatic recognition of the tracks and their artists. For the first time, in this facelifted fifth generation model, it was also possible to connect an iPod, USB stick or other external audio device to the COMAND System thanks to an optional media interface housed in the centre console. Customers also got the option of the AIRSCARF neck level heating system that by 2008 had proven very popular with SLK buyers. This incorporates heating and a hot air blower in the head restraint of the seat to provide a constant stream of warm air, ideal for enjoying top-down motoring on those clear winter mornings. 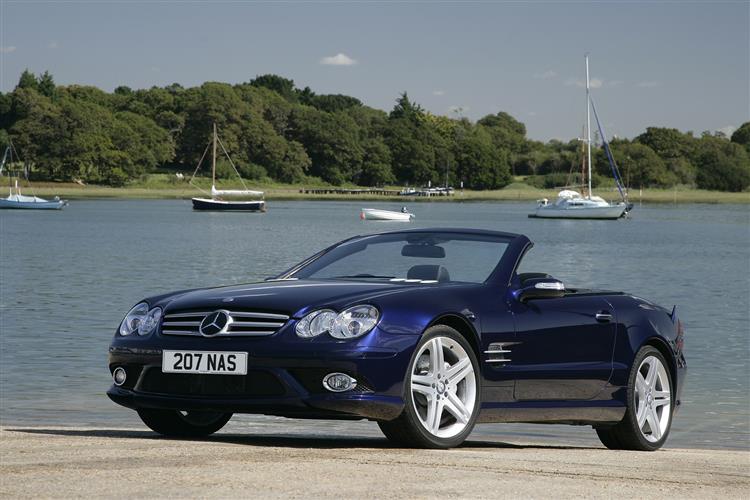