"What is that?" was my response to seeing my first Peugeot RCZ. It was a prototype doing some testing in the Alps and I'd just chanced upon it by sheer fluke. It looked like something from a different planet with its crazy curves and jet-fighter glasshouse. It was only when I trawled my memory that I associated it with the Peugeot 308 RCZ concept car that had appeared at the 2007 Frankfurt Show. It was exactly the sort of car that Peugeot needed to lift them out of a period when their styling direction had gone badly astray. The RCZ was a marker laid down and a very successful one at that. Here's how to select a decent used example.

It wasn't until the 2009 Frankfurt Show that the production RCZ was unveiled to the public. It caused a sensation. Or rather it would have if show-goers could be convinced that, yes, this wild looking car was going into production. The thing is, we're always beguiled by crazy cars at the big shows which, if they ever do make production, look nothing like the vehicle on the show stands. The RCZ was different. When it arrived in UK dealerships in summer 2010, it looked every inch the show star. Nothing had been significantly watered down or cut through budgetary constraints. The range consisted of two versions of the 1.6 THP diesel engine and a 2.0-litre HDI diesel. By the same time the following year, Peugeot had sold over 30,000 RCZ models which was beyond its most optimistic projection. Those who dismissed the car as an "Aldi TT" were being forced to eat their words. Sales continued strongly throughout 2012, through to the unveiling of the facelift car that replaced the original in quarter one of 2013.

The RCZ might well be prettier than anything else you can get for the price. This is one of those rare things: a motor show concept car brought almost unchanged to production reality. It's a shape simply dripping with beautiful detail, most notably with the deliciously voluptuous rear window where two perfect curves of glass merge seamlessly with the twin humps of the roof, this car's so-called 'double-bubble' styling signature. It looks sensational, offering a handcrafted feel with enough wow factor to make a pricier Audi TT seem very ordinary indeed. Move inside through the large doors and the Ingolstadt car's class-leading cabin makes up some ground but this is an interior Peugeot can still be rightly proud of. The driving position's low-set and sporting but on base models, the lovely prominent circular clock and assorted metallic accents aren't quite enough to completely divert your attention from some of the hard plastics - on the glovebox lid for instance - that are a legacy of a 308-derived dash. Still, once you've added the leather seats included on higher spec models and wisely fitted the extra-cost integral leather pack that extends hide to the upper part of the dashboard, it all feels properly premium. Build quality's great too: this car once rolled down an Austrian production line alongside £150,000 Aston Martin Rapides - and it shows. And practicality? Rather improbably on a car of this kind, this is something of a virtue, despite the fact that unlike its immediate rivals, this Gallic coupe has a boot rather than a rear hatch. Which on this evidence, is perhaps a better way to go for before you start folding seats, this RCZ's 384-litre luggage capacity is significantly greater, not only than a TT but even the larger VW Scirocco. Fold its rear seats and the figure rises to 760-litres. You might be tempted to keep them folded too as, unlike the VW, this isn't a place you could reasonably seat two adults - not unless you had something against them anyway. 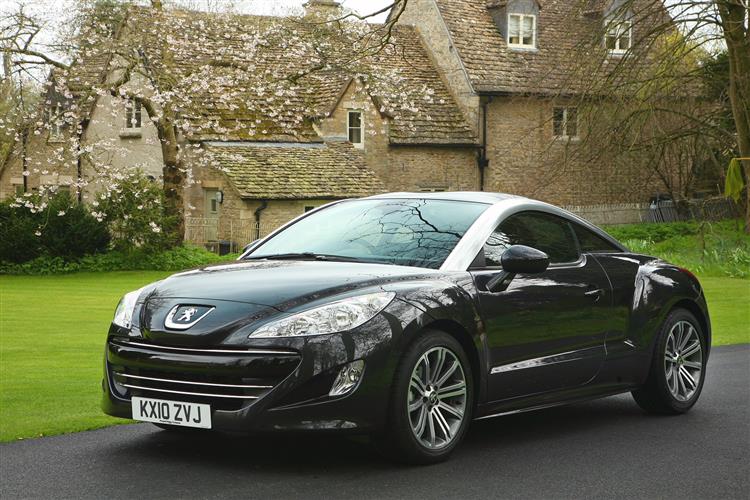