FLEX IN EFFECT (some text hidden)

It's always cool when a car manufacturer hits its stride and launches onto a successive run of interesting and competitive cars. These fortunes wax and wane with time, but Vauxhall is one manufacturer that's consistently turning out some good stuff right now and that run of form includes the launch in 2010 of the second generation Meriva. The first Meriva was clever, but was massively overshadowed by the Zafira. This time round the Meriva grew up. Here's what to look for when buying used.

It's a testament to the impact the original Meriva had that it pretty much defined the supermini MPV market. Yes, we'd had cars like the Daihatsu Grand Move and its like before but nothing that really made an impact on the mass market. The Meriva changed all that in 2003, offering a car built on a supermini platform - in this case the Corsa - but offering a little more practicality, catering better to the needs of family buyers. That means more space and adaptability than a supermini but the same compact dimensions, low running costs and upfront affordability. The Meriva didn't do at all badly, but was rather put in the shade by the sales success of its bigger brother, the hugely popular Zafira. In 2010 Vauxhall launched an all-new Meriva and it was no longer the cutesy, somewhat built-down-to-a-price thing that the old car was. The new model, dubbed the 'Meriva B' by Vauxhall insiders, debuted at the 2010 Geneva Motor Show and received a favourable reaction, going on sale here in the Spring of 2010. It's the first car in its class to offer rear-hinged rear doors, which its makers call the Flex Door system. The range consisted of SE, SE and Exclusiv models at launch but was subsequently augmented by Expression and Excite models in 2011 and the Tech Line trims in 2012,

What You Getword count: 432

To get a roomy, user-friendly interior, supermini-MPV buyers were once forced to put up with exterior styling so dull it could induce sleep at 100 paces. Things have improved of late though and today's Meriva is a far more appealing thing to look at. The designers of this car were given extra room to express themselves with a 240mm increase over the original model that takes the total length close to 4,300mm and the wheelbase to 2,705mm. The sculpted shape follows many of the design themes seen on the Astra hatch, with a cutaway section in the flanks and a distinctive front-end sporting huge headlamps that smear back along the edges of the bonnet. The real innovation with the Meriva comes in its novel door arrangement. From the outside, nothing unusual appears to be going on except that the handles for the front and rear doors are suspiciously close together. Tug the front door handle and it opens as normal but the rear door is hinged on its rear edge and opens in the opposite direction in the manner of a Rolls-Royce Phantom or a Mazda RX-8. The advantage of this design comes when entering and exiting the vehicle as the doors open to an angle of almost 90 degrees and you can step straight out unhindered. It also helps parents when they're strapping the kids in or fitting child car seats because there's no door in the way to manoeuvre around. The interior itself is based around the FlexSpace seating system which allows the rear seats to fold down and slide individually. Splitting the cabin on the plusher models is the FlexRail, a pair of metal runners between the front seats that various modular storage bins and arm-rests can be clipped to and slid along. The Meriva is designed to give all occupants a great view out with its large glass area and upright seating. A kink in the car's belt line makes the rear windows deeper to help kids see out and a panoramic glass roof is available as an option. All models come with a CD stereo with USB and AUX connections, heated door mirrors, electric windows and an electronic parking brake. The Exclusiv has been a popular choice with its air-conditioning, cruise control, curtain airbags and the FlexRail storage system. Pricing reflects the Meriva's increase in size and sophistication compared to its predecessor. Some supermini-MPVs like the Renault Modus and the Citroen C3 Picasso can be quite a bit cheaper but Vauxhall sees the Meriva's innovative design helping it cross over into the market for five-seat compact MPVs. 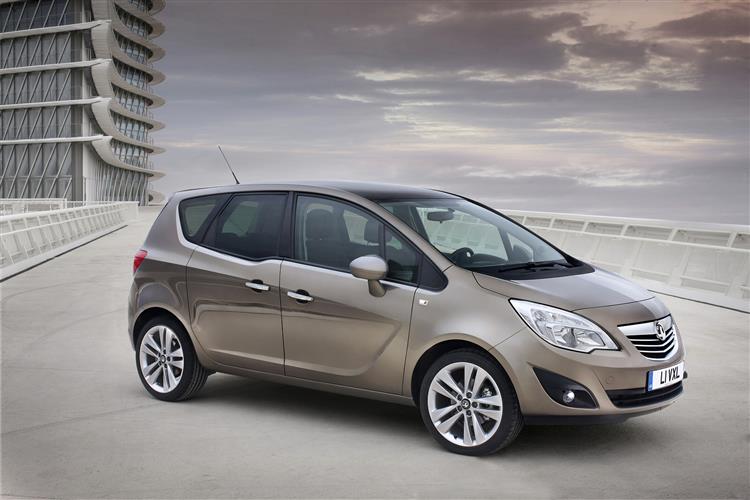