Improvements to the third generation Renault Clio in 2009 aimed to keep it at the forefront of the British supermini sector, with sportier styling complementing a sensible mix of practical small car virtues. At its heart though, it remains very simply safe, spacious and affordable. Will that be enough to tempt supermini buyers looking for an affordable alternative in the used car market? Let's find out.

First shown at the 2009 Geneva Show, the revised Clio was an instant hit. A Renaultsport 200 model followed hot on the heels of the standard car, with a World Series limited edition arriving in UK dealers in July 2009. This was followed by the I-Music model at the end of the year with the Clio Gordini 200 debuting in summer 2010. Renault wasn't done there, with a Silverstone GP model appearing in 2011 and a Raider version at the tail end of 2011. An all-new Clio 4 model was unveiled in summer 2012.

The Clio Mk III was always a large car in the supermini class but this improved version is even bigger - and there's a reason for that. The original version of this model had a sensible but forgettable look that by 2009, didn't cut it amongst more daringly-styled rivals. Hence another 41mm of length went into making it appear lower, leaner and more streamlined. Take the front end, markedly more aggressive with the sharp lines of the air-intake and the headlights combined with the thin, smirking grille. It's a look that debuted on the Megane family hatch and it gave the Clio a far more purposeful appearance, even in its non-sporting forms. The interior was also upgraded with some relocating of the minor controls to increase user-friendliness. Despite this, cheaper models can still feel a little cheap, so try and stretch to at least a mid-range trim level, from which point Renault fits a lovely soft-touch dashboard that makes a big difference. At this point in the Clio hierarchy, you also get a much better driving position, thanks to the driver's seat height adjustment and steering wheel reach adjustment denied to owners of cheaper versions Apart from this, the only slight reservation is that visibility when parking can be a little restricted by the rather thick rear B and C-pillars. As for cabin space, though none of this revised model's extra length is on offer to passengers, this still remains one of the more spacious cabins in the class and the 288-litre boot is a good size, slightly smaller than, say a Fiesta's with all seats in place, but larger than the rival Ford Fiesta if you fold them forward to reveal a 1038-litre load bay. Most Clio customers choose between three and five-door hatchback body styles, with the hot hatch Clio Renaultsport models based on the 3-door variant. For the slightly more versatile Sport Tourer estate body shape, new car buyers were looking at a premium of around £850 over the equivalent five-door hatchback model. And, back when buying new, there was a £1,600 premium to go from an entry-level 1.2-litre petrol to a base dCi 86 diesel model. It's much less of a jump to graduate from that petrol 1.2 to the much more satisfying 1.2 TCe Turbo 100 petrol variant, a better solution for low mileage owners. The 106bhp 1.5 dCi diesel and 110bhp 1.6 VVT petrol models at the top of the range will be minority choices. 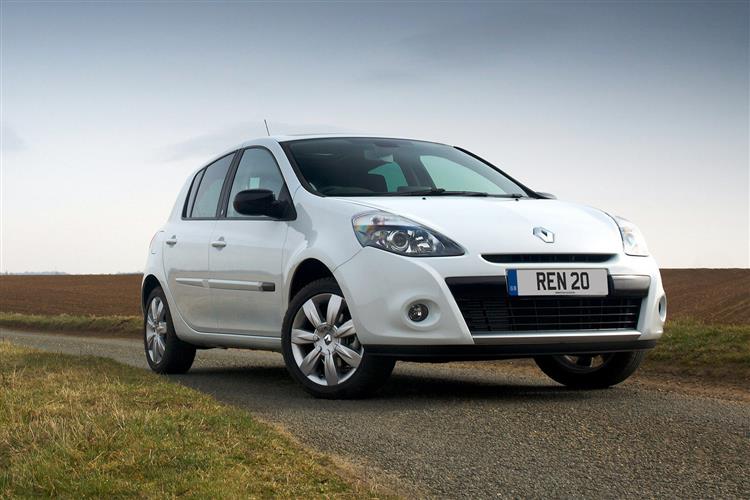