What we're looking at here is a little bit of meat in the Citroen C1 sandwich. The C1 has remained basically the same vehicle since it was launched in 2007. It runs on the same chassis and uses much the same engine. What has changed are the tweaks to its styling, the amount of standard equipment you get and the price. To this end, we can divide the C1 timeline into three neat chunks. It starts with the original model, built between 2006 and 2009 and ends with the post-2012 fully facelifted car. The version though, that you're most likely to find on the used car market is the one we're going to look at here, the one found in the middle of this model's life cycle and built between 2009 and 2012. This model represented the first time the C1 had been facelifted and was available, like its predecessor, with two body styles - three and five door - a 1.0-litre petrol or a 1.4 diesel engine and a pair of trim levels, VT and VTR. The diesel was unique to the Citroen version of this design, Peugeot's 107 and Toyota's Aygo ignoring it, but C1 diesel derivatives didn't stay in Citroen showrooms long, lack of demand putting paid to HDi motoring for C1 buyers late in 2009. Instead, the French brand decided to offer customers a plusher VTR+ trim level, which arrived in 2010 just before the introduction of a VTR+ EGS model, with a self-shifting robotised manual gearbox to help take the strain out of city driving.

There's no point in economical motoring that leaves you needing another, bigger car all the time when you've larger numbers of people or packages to carry. Which is why, unlike a number of its rival tiny runabouts, the C1 offers a choice of either three or five-door body styles. That doesn't make it any kind of large supermini - indeed, the tale of the tape shows a short 3.4 metre overall length, which is almost 23cm less than a modern MINI. No, this French tot achieves its carriage capacity through ruthlessly efficient wheel-at-each-corner design, something for which this car has been famed ever since we first saw it in 2006. Though the look was changed a little from 2009 onwards - most notably with the chrome-ringed grille offered on plusher versions - it's still stylish, simple and effortless, form and function in perfect harmony wherever you look. The wide wraparound bumper, the rounded bonnet and bulbous headlamp clusters combine to create the feeling of fun that's characterised all great citycars, from the original Minis and Fiat 500s of the Fifties and Sixties to the smart fortwo of the Nineties. To these legendary runabouts, this design is a worthy successor. The rear end is very nicely finished with big crystal and anthracite rear light clusters and a deep under-bumper assembly. The wheelarches are surprisingly beefy and the rear set are sculpted a little further forward in the three-door body style. The five-door car sees its rear doors meet the rear light clusters in a very neat piece of packaging. At the back, the glass tailgate looks good and though it doesn't open down to bumper level like a conventional rear hatch, it does reveal 139-litres of space which you can extend to 751-litres by flattening the rear seats. And at the wheel? Well, Citroen have been regaining their reputation for bold and exciting interiors of late and the C1 continues that trend. Headroom inside the car isn't at all bad, even for someone well over six feet tall, and the big glass area up front gives an airy feel to the cabin. City cars used to be nasty things to have to spend more than short journeys in but these days, that's changing, at least in this case. In this car's brighter interior, there's decent elbow room, the steering wheel adjusts for rake (up and down) and there's enough fore/aft adjustment in the front seats for all but the most portly people. It's a bit tighter in the rear of course - there's only so much that can be done within the restrictions of a 2.34 metre wheelbase after all - but it'll be fine for two large adults on short to medium-length journeys and quite comfortable for two children. For little ones, you'll find it helps that the window line is low: being able to see out more easily is really useful when it comes to reducing travel sickness. 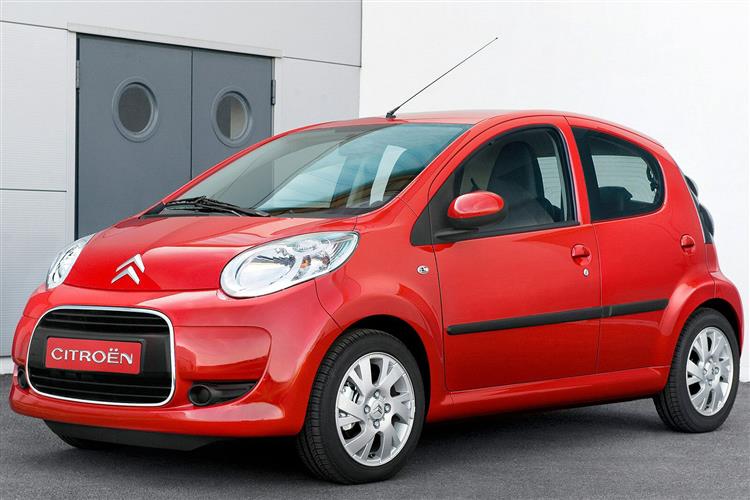