The Nissan Murano is one of those cars that was never quite right first time for the British market but which, after a bit of fettling, belatedly came good. Unfortunately, by the time Nissan had got the offering right, the damage had been done. The Murano was never a big seller. In fact, it remains a very rare sight on our roads. This means that if you're in the market for a used Murano, you could well pick up a bargain. You'll need to be patient though. Here's what to look for.

Nissan dropped one heck of a clanger when it first introduced the Murano back in 2005. Okay, so it was probably expecting the big crossover to occupy a modest niche, but perhaps even Nissan were surprised at how very modest the sales were. The problem lay with the engine. There's not a lot wrong with the 3.5-litre V6 VQ35DE engine per se. It even won Ward's 10 Best Engines list from 2002 through to 2007 and powers a 350Z really very well. It's just that there was no appetite for a relatively thirsty petrol engine in a big crossover vehicle. Somewhat amazingly, it took Nissan fully four years to rectify this glaring shortcoming. In the interim, a 'new' Murano model appeared in autumn 2008. This was a true second generation model, riding on a different chassis to the original car and featuring a far better quality interior. The 2.5-litre diesel engine finally materialised in 2009 and the Murano persisted until 2011 when it was quietly deleted.

This Murano's styling will be a key reason why buyers either reach for their credit cards or run a mile. Nissan's designers took the opportunity to combine the need for cooling airflow to the diesel engine and radiators with a styling makeover for the front-end. A revised grille and bumper design reinforced the striking looks. As a result, with a big set of wheels filling its bulbous wheelarches, the Murano is quite a striking sight. Buyers will just have to judge whether or not it's one they want to see outside their houses every morning. The interior goes after an upmarket feel and is broadly successful. There are a lot of buttons as if to underline the quantity of equipment that has been crammed inside but the finishes and the luminescent instruments stop just the right side of over the top given the Murano's extrovert nature. An enormous dual panel glass sun roof is available in the standard model, but if the original keeper wasn't bothered about that, there was also the option of a roof-mounted DVD player system. There's also a powered tailgate which opens and shuts in 7 and 9 seconds respectively, plus a kerb camera mounted within the passenger door mirror. At speeds up to 12 mph it displays images of the ground beside the car on the 7 inch colour sat nav screen, showing the proximity of walls, kerbs and otherwise obscured obstacles. If those don't impress, try the rear electric seat system. The rear seats split 60/40 and are lowered simply by pulling a lever in the luggage area, but raising them is even easier; press a button on the dashboard or in the cargo area and the seats automatically move into position in just 8 seconds. 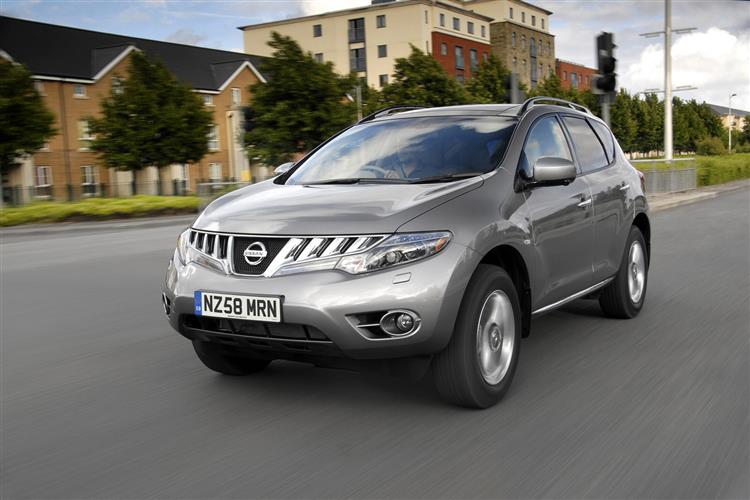