STRAIGHT TO THE A (some text hidden)

The latest Mercedes-Benz A Class has become something very sporty and desirable but it wasn't always like that. There is a whole generation of customers who still remembers the A-Class as the car that failed the 'elk test', while others bemoan the fact that it dragged the brand downmarket into a sector it had no experience nor talent for exploiting. The latter point certainly has some validity to it and it's due to this perceived failure to dominate that Mercedes has subtly shifted this car back upmarket into a bracket in which it feels a little more comfortable. The model we look at here was Mercedes' last throw of the dice for the 'W169' model as it was called internally. This car had been on sale since early 2005 in the UK but we're specifically looking at the post 2008 car which received a raft of improvements. As with any car that's moving towards the end of its life cycle, this version of the A-Class had much of its faults ironed out and more equipment built in, making it a decent used buy.

The facelift that was visited upon the A-Class in 2008 was relatively modest. Exterior revisions were reasonably subtle, with new lights and bumpers at the front and rear, a redesigned radiator grille and a choice of revised alloy wheel designs. Minor details such as side rubbing strips were changed depending on the trim level. Inside there were updated fabrics and fascia inserts to correspond to revised trim levels. The range was heavily rationalised, with the focus being devoted to the smaller, more economical engines. Out went vehicles like the A200 Turbo and in came just two petrol options - the A150 with its 1.5-litre 95bhp unit and the A170 with its 1.7-litre lump producing 116bhp. The diesel engines were more vocal than the refined petrol units but had extra strength at low revs for launching the A-Class about town. The A160 CDI was an 82bhp 2.0-litre unit while the A180 CDI had that same capacity and 109bhp. Mercedes introduced a package of eco-friendly BlueEfficiency tweaks across the range to try and rival BMWs EfficientDynamics package. This led to improved fuel consumption figures and lower emissions on all models. The A170 was shelved in 2009 with Mercedes increasingly focused on the diesel-engined models. The three-door cars were also quietly disappeared. The car was pensioned off with the arrival of the third generation A-Class, which made its debut at the 2012 Geneva Motor Show, arriving in dealers the following summer.

What You Getword count: 284

Rather belatedly, Mercedes realised that the A-Class made a nigh-on perfect platform to showcase its environmental credentials and this improved post-2008 model incorporates a number of fuel-saving tweaks and emissions-reducing technology that not only saves money but will make its owner feel a little less guilty. Under emergency braking from a speed exceeding 30mph, the brake lights flash rapidly to warn following traffic, enabling drivers to respond quicker and prevent a collision. Also introduced was Hill Start Assist, which prevents the A-Class from rolling backwards when the driver moves from the brake pedal to the accelerator when moving off on an uphill gradient. The car is more comfortable as a result of the facelift initiative's new interior materials, with improved adjustment and support in the seats. All models got new infotainment systems with Bluetooth connectivity and the A-Class remained an inspired piece of packaging. We can think of no other car that measures less than four metres which offers as much space inside as the A-Class - and this, remember, is a vehicle that predated the whole compact MPV boom. The rear seats don't slide but they do flip forwards to reveal a long flat floor and the Easy Vario Plus system allows the cushion of the rear seat to be secreted under the boot floor. Not only is there adequate space for four adults, but the A-Class manages this trick and still offers 435-litres of boot space. That's more than is offered by a much bigger family hatch like a Ford Focus. The interior design of the A-Class is also much more in line with bigger Mercedes models. Those who remember the low-rent plastics of the original car will appreciate the improved feel. 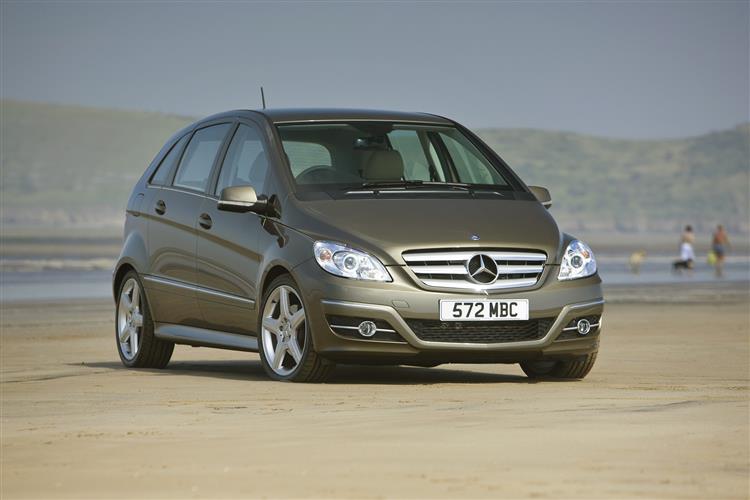