ALL GOOD THINGS.. (some text hidden)

By and large, when we talk about cars, we're overwhelmingly concerned with what's new, what's being launched and what developments are on the way. We tend to devote less attention to goodbyes, to cars which slip quietly out of production with not so much as a by your leave. Every once in a while, however, we lose one of the icons and exactly that happened in January 2012 when Renault withdrew the Espace from sale in the UK. It came as a shock to many, but the sales figures didn't lie and the Espace had, much as it hurts to admit it, become too expensive to be wholly relevant, especially to a new generation of increasingly cash-strapped families. The product itself retained its unique charm and although the pricing when the car was new was eye-watering, second time around there's a lot to be said for the last of this esteemed line.

Perhaps it was exactly because the Renault Espace had come to represent the default large MPV in most people's eyes that its summary deletion from Renault's price lists seemed such a shocker. There aren't too many vehicles that act as quite such a benchmark in their sector as the Espace. This model was the fourth generation car, originally launched back in 2002, but re-jigged in 2010. The Espace had been treated to a few rounds of cosmetic surgery, with refreshes coming in 2005 and 2007, so Renault had certainly wrung some value from this platform. By 2010, the Espace still looked great. Expensive, but great. It was clear from respective sales figures that the lion's share of large MPV sales were going to budget models like the Kia Sedona, the SEAT Alhambra and the entry level versions of Chrysler's Grand Voyager. The market for a true TGV-style experience seemed to have dried up, although the sales Renault did make were overwhelmingly biased to the longer wheelbase Grand Espace than its shorter sibling. The 2010 changes attempted to improve the Espace's value proposition whilst at the same time paring the range right back to one engine in two power outputs, a transmission choice and one trim level across the two wheelbases.

Whereas the MKIII model was built around a radical spaceframe chassis with composite parts, the MKIV Espace instead opts for a more conventional steel monocoque platform shared with the Laguna. Only the wings and tailgate are now made of plastic composites, the doors and bonnet being fabricated in aluminium with a steel roof. The interior is as spacious as ever with plenty of space for seven. Need more room? In return for increasing the size of your cheque to your Renault dealer by about £1,000 for a 'Grand Espace' model, you get substantially more luggage space. Over 165 litres more to be exact when all the seats are in place, making a total of 456 litres which could make the difference between having to use a roof box or trailer and not having to bother. Should you be able to get rid of all the seats, bar those at the front, the total carrying capacity rises to removal van standards, up by 190-litres to 3050-litres. The Dynamique TomTom offers a decent standard of safety and comfort, getting seven seats and a modular interior layout. Standard equipment included sport-style upholstery featuring extra side support and Teflon protection, an integrated Carminat TomTom Live satnav as well as a piano black interior trim. The Espace's versatility continued as before, with ten aluminium tracks in the floor which enabled the interior and boot space to be adapted in line with the number of passengers and luggage being carried. On the outside, the headlights incorporated LED daytime running lights and the range of seven body colours included a striking Pearl Blue. The wheel choice comprised 17-inch Eptius and Novadis rims. 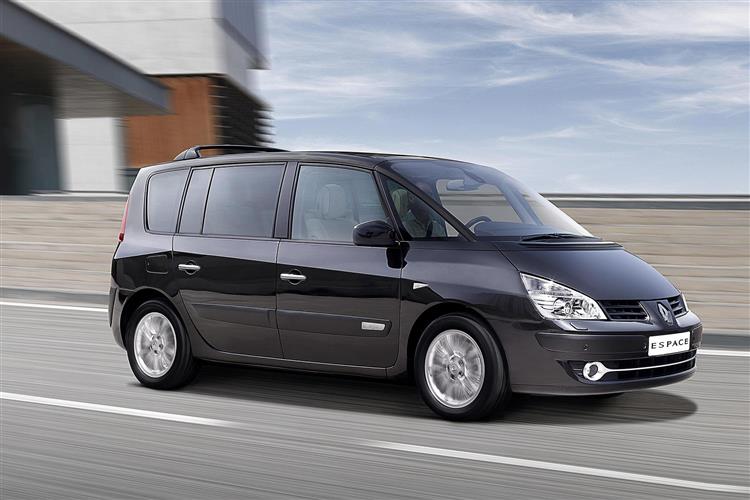