Fast Audi coupes have an unenviable task. It doesn't usually take too long before the most famous car the Ingolstadt company ever built, the ur-Quattro , is brought into the comparison and facing down legends is a big ask. The Audi RS5, it's fair to say, has never really got close to eclipsing its grand daddy, but put the two cars together on a test track and you'd have to wonder what Audi has to do. The RS5 offers a huge slug of power, quite stupefying build quality and equipment as well as a charismatic V8 soundtrack. With engines increasingly being downsized, the RS5 might be one of the last of this sort of vehicle. Used examples are now starting to appear in meaningful numbers and, if you're prepared to work at it, bargains are available.

Audi introduced the A5 coupe in 2007 and as soon as it arrived rumours began circulating of a go-faster version in the pipeline. The really quick RS models tend to be rationed across the model range, so we had quite some time to wait before Audi's go-faster division, quattro GmbH, treated the A5 to the full muscle makeover. The wraps came off the RS5 at the 2010 Geneva Auto Salon, Switzerland's annual pageant of the state of the automotive art, and first impressions were promising. Motive power came from a normally-aspirated 444bhp V8 which deployed its quattro all-wheel drive via a seven-speed twin-clutch gearbox. The RS5 also featured a revised version of the Audi's four-wheel drive system, with a new centre differential and a new torque vectoring system (which brakes individual wheels), plus the option of a sport rear differential. The first cars were rolled out to the press shortly thereafter and the reception was decidedly lukewarm. Sales weren't stellar either and the RS5 limped along as the poor relation of Audi's flagship sports line. A significant update was announced in February 2012. With sharper styling and better efficiency, the 'new' RS5 looked to relaunch the model.

The standard Audi A5 is a beautiful and understated car but whether you could pay either complement to the RS5 is open to debate. Understated it certainly isn't. Aggressive air intakes and a matt aluminium splitter mark out the front end, the wheelarches bulge imposingly and at the rear are two of the largest exhausts you'll have ever seen mounted either side of a large diffuser. There's a spoiler in the tailgate that extends at 75mph, tucking itself away again when you drop below 50mph, so even if you aren't breaking the speed limit, the police will know that you have been. To say the RS5 chassis is merely advanced would be to do it a disservice. The car features the latest quattro all-wheel-drive technology with a crown-gear centre differential and Audi's sport differential between the rear wheels. Under normal conditions, power is distributed 40:60 between the front and rear wheels but the crown-gear differential can automatically send as much as 70% forward or 80% rearward as the situation dictates. The sport differential then distributes power between the two rear wheels to further enhance stability and traction. The Dynamic Ride Control interlinks each of the car's shock absorbers with its counterpart on the opposite corner of the vehicle via a central valve and is calibrated to provide extra damping force when required. The driver can select Comfort, Dynamic and Sport modes according to the firmness of the damping required. The car rides 20mm lower than a standard A5 on its 19" alloy wheels. 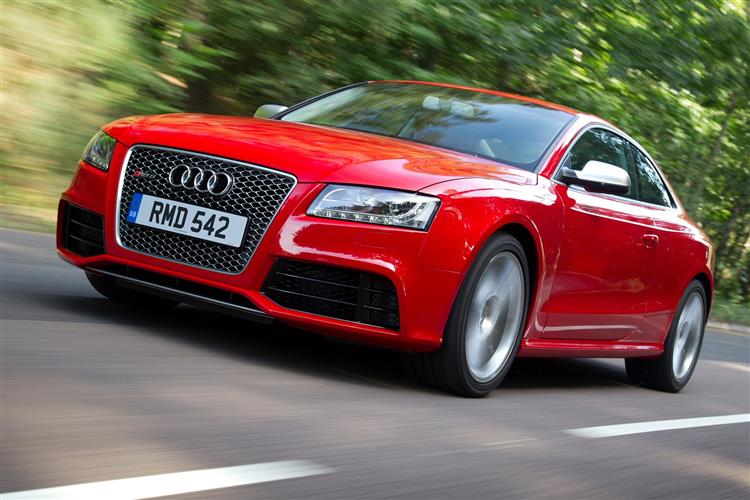