ALL FOR ONE. (some text hidden)

Figure this one out for me, if you would. The Peugeot 107 citycar was launched at the same time as its sister vehicles, the Citroen C1 and the Toyota Aygo. The Citroen was the cheapest and was also offered with a diesel engine. The Toyota was the plushest and most adventurously styled. The Peugeot, sitting somewhere in the middle with by far the most limited model run looked like it was going to bomb. Badly. Yet trawl the classifieds for used examples of these cars and you'll find as many 107s as the other two cars put together. It seems that when it comes to sub-supermini type citycars, British customers have a Goldilocks syndrome, and the 107 has proved neither too little nor too much.

Those of you who keep tabs on the motoring scene will already know that the 107 came about as a result of as partnership between PSA Peugeot Citroen and Toyota. Manufactured at a specialist plant in Kolin in the Czech Republic, the 107 represents a third of the factory's 300,000 annual output, with a good proportion of the baby bouncing Czechs heading for the UK, one of Peugeot's biggest global markets. Since then, the 107 has notched up decent sales figures, despite the early lack of a diesel model. It seems British customers are sufficiently savvy to be able to figure out that unless they're commuting to Kolin on a daily basis, a 1.0-litre petrol engine works out better value than opting for the 1.4-litre diesels sported from early on by the Toyota and Citroen. Sales have been buoyant with Peugeot shifting around 3,000 cars per month in the first year of production. The Urban Lite trim level slotted in beneath the Urban in Winter 2006, further enhancing the 107's low cost credentials by stripping out some features and nudging the entry-level price earthward. The Sport XS models turned up early in 2007 with spoilers a twin exhaust and red interior detailing but the same modest 1.0-litre engine.

The design brief for the 107 was to engineer a compact car with an assertive character, versatility in use and above all, that was totally at ease in the urban environment. To meet these criteria, a number of restrictions were placed on the initial proposal. The length of the car wasn't to exceed 3.5 metres, yet a whole host of safety features needed to be included, as well as enough wheelbase to accommodate a five-door body style. The final execution exceeded initial requirements, breaking the tape at 3.43 metres long. This makes it fully 25cm shorter than the old 106. The dimensions of the 107 can really only be appreciated when walking around the car. Compared to the 1007 that Peugeot introduced around the same time - itself no giant - the 107 is smaller in every regard. The three-door shape looks the most comfortable from a design perspective, but the five-door has proven a bigger commercial success. The angled window line gives the car a cute wedge profile and the flared rear haunches really emphasise the wheel-at-each-corner layout. The 107 features some neat design touches. The glazed-in area surrounding the rear window is finished in black, giving the car a very distinctive rump, especially when it's painted in paler colours. The front end also features the wide mouthed Peugeot family design debuted on the 407. Coupled with the huge eyes created by the headlamps, this gives the 107 a more distinctive face than virtually any other car on sale today. Eight exterior colours were offered - five metallic and three solid hues. 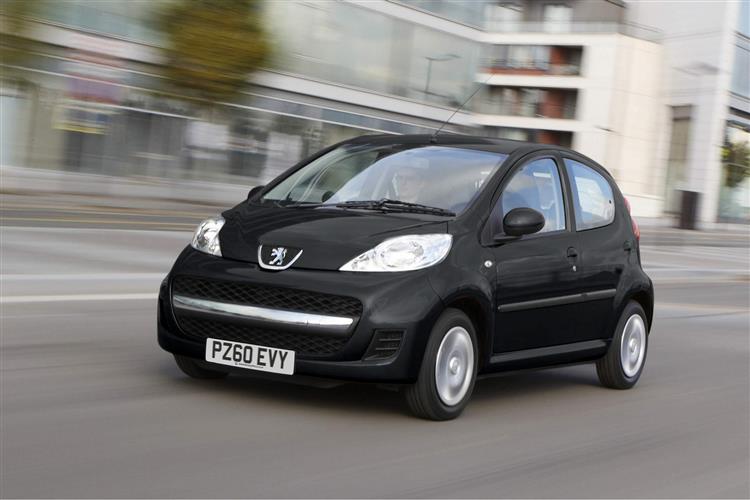