GONE WITH THE WIND (some text hidden)

I feel obliged to establish one overriding fact right off the bat when discussing the Renault Wind and it's one that needs to be borne in mind throughout this used car model guide. The Wind is not a bad car. In fact, it's a reasonably good one. Unfortunately, its launch was bungled by Renault, it was saddled with a quite ludicrous name and was thus never likely to cut it, even in one of the softest markets in the car business. Tracking down a used Wind is an inexpensive and relatively painless way of getting a nearly new car with some genuinely worthy attributes. You'll just have to grow a thick skin as people snigger when you tell them what you drive.

Does any modern car have a sadder backstory than the Renault Wind? It was introduced in July 2010 and by December 2011, it had been killed off, in this country at least. It fell victim to probably the most savage series of product cuts in recent history. As well as axing around half of its dealers in time for Christmas, Renault also got the marker pen out and started drawing thick black lines through much of its product range. Laguna? Killed. Wind? Terminated. Even what seemed like safe bets like the Kangoo and the iconic Espace bit the bullet. It had only been four months since Renault had launched the ritzy Gordini version of the Wind and already it was history. Sales had almost flatlined and Renault drew back to its most profitable core models. So that's the short and rather unhappy story of the Wind. I didn't mean to depress you.

The design of the Wind is rather clever. Most small convertibles have rear seats but a lack of space means people looking to sit in them will usually need to unscrew both legs beforehand. They could store these extraneous limbs in the boot for the duration of the journey but that's only if there's any luggage space to speak of. The complex roof mechanism has to fold down into rear of these cars and tends to impinge on capacity back there. Renault's solution was to axe the rear seats completely, creating a shorter cabin that could be bridged by a smaller, simpler roof mechanism. There's plenty of space for a pair of occupants and a 270-litre boot capacity that's virtually unheard of in a convertible this size. The roof itself is straightforward and effective: it retracts in just 12 seconds, pivoting back to stow itself below the boot lid. It means that the amount of available luggage space is unaffected whether the Wind's cabin is open to the elements or sheltered. The Wind's simple roof design has also helped its styling. It's a small car at just 3,830mm long, but unlike many other compact convertibles, it doesn't need an extended rear end to fit a large and complex canopy in. The Wind isn't the most elegant drop-top on the road but Renault has given it a foursquare stance and a certain aggression. Inside, there are sports seats lending good lateral support and the instruments are housed in metallic cowls with chrome detailing to provide some extra sense of occasion. 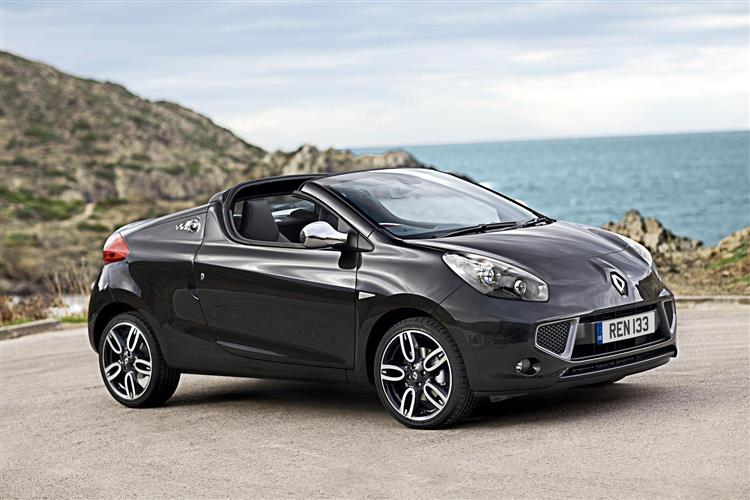